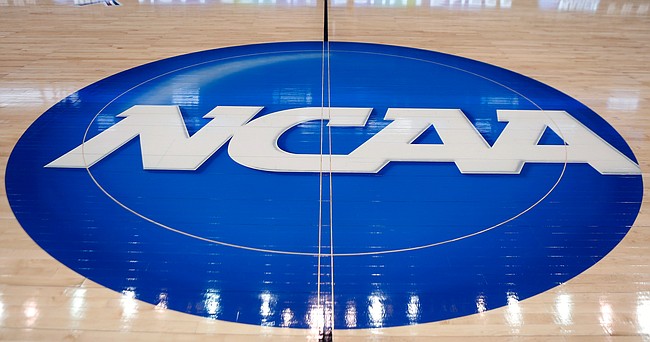 In this March 18, 2015, file photo, the NCAA logo is displayed at center court as work continues at The Consol Energy Center in Pittsburgh, for the NCAA college basketball tournament.

The NCAA on Wednesday voted to discontinue the Independent Accountability Resolutions Process, a largely failed infractions experiment that led to more headaches than resolutions.

The vote to eliminate the IARP path was part of a big-picture overhaul of the NCAA’s infractions process, and, by far, the most relevant to those associated with the Kansas basketball program, which is still awaiting a ruling in its infractions case.

According to a news release announcing the vote, the intent of the changes to the NCAA’s infractions procedure came in an attempt “to modernize and enhance the process while focusing national office and membership resources on the most serious violations.”

“These changes to the overall infractions process will accelerate the timelines for infractions cases,” said Jere Morehead, chair of the Board of Directors. “With the adoption of the new constitution in January, NCAA members committed to resolving cases fairly and in a timely fashion, thus holding those responsible for violations accountable and avoiding penalizing those who were not involved in rule-breaking.”

As such, the NCAA adopted three major proposals on Wednesday. The elimination of the IARP was one. It will be dissolved as soon as the five cases that remain on the path are adjudicated.

Created in 2019 at the recommendation of the Commission on College Basketball, the IARP process came to an end for two major reasons. First, the NCAA said Wednesday that the number of cases referred to the IARP was “greater than initially anticipated,” and, second, the time and resources required to bring IARP cases to resolution created a significant backlog that prolonged the process and drew criticism throughout college basketball.

The NCAA’s case against KU, which includes allegations of five Level 1 infractions, a charge of head coach responsibility and a tag of lack of institutional control, was accepted by the IARP on July 1, 2020, nearly one year after KU received its initial notice of allegations from the NCAA in September 2019 and now more than two years ago.

In April of 2021, the NCAA announced that final rulings in all six cases on the IARP path were expected in the next 12 months. However, just one of the six cases has reached resolution during that time. Last December, North Carolina State was placed on probation for one year following an IARP ruling over recruiting violations.

KU, Arizona, LSU, Louisville and Memphis are the five institutions with infractions cases still being reviewed by the newly formed IARP, which was created specifically to handle complex cases related to the recent FBI investigation into corruption in college basketball recruiting.

There remains no known timeline for a ruling in any of the other five cases, and several people involved with college athletics, including outgoing NCAA President Mark Emmert, have expressed frustration over how long the IARP process has taken.

In addition to eliminating the independent path, changes to the peer review process and the appeals process also were adopted by the NCAA on Wednesday. Those changes will go into effect on Jan. 1, 2023.

The changes to the review process, designed to increase transparency and expedite resolutions include:

• Clarification about the role of school leadership in an investigation.

• The creation of a public-facing dashboard of existing infractions cases.

The changes to the appeals process, which aim to clarify the standards and reduce the number of appeals, therein completing the overall infractions process in a more timely manner include:

• Limiting appeals of penalties to only those that fall outside legislated penalty guidelines.

• Overturning Committee on Infractions decisions only when an appealing party demonstrates that no reasonable person could have made that decision.

• Resolving the majority of appealed cases through a written record rather than conducting oral arguments.

• As with the peer-review proposal, prohibiting extensions to timelines except in extreme and clearly defined circumstances.

I'm putting the over/under on when we will finally get a decision at 3 more years. Who wants the over and who wants the under?

I guess it’s a matter of which case is resolved next. With 5 more cases, it could be next year or next decade.

I’m not interested in investing much mental energy into understanding the changes but they generally seem to fall into the category of We are your leaders, don’t question our decisions. As if their performance to date wasn’t questionable to begin with.

"We are your leaders, don’t question our decisions."

Sounds like the modern Democrat Party motto to me.

Yeah, you're right, Bryce. It's Democrats who have been trying to suppress votes for years, organized a coup to overturn a legitimate election, protest every close loss, complain about an FBI search for stolen classified documents, and I could go on forever. Yep, when it comes to fascism, it's clearly the Democrats who are engaging in it. The Repubs' ability to deny reality never ceases to amaze me.

"it's clearly the Democrats who are engaging in it."

Back to the NCAA...what's laughable about all of this is KU fans whining about how long it takes. Imagine if this were a legal case....with delay tactics...appeals....appeals of appeals...

The NCAA, for mentally retarded republicans who are currently having someone else read this to them, is an association of schools who sign on to........ALL OF THIS! Every year. Year after year. Voluntarily.

These aren't Jewish laser beams, or pizza pedophiles, or alien-controlled voting machines, or imaginary forces controlling Bigfoot......these are people YOU HIRED and YOU PAY. You organized this thing, you approve all of the bylaws, you approve all the rules, you approve the review process, the investigative process, the penalty process, etc., etc. You even allowed your headquarters to move to the single ugliest city on the face of the planet. Which pretty much says everything.

If you are wondering how the NCAA got so screwed up, look who KU has sent to represent us....Major Milktoast....Sheahon Zenger....Jeff Long.....these aren't smart people. These are dumb people. They do dumb things. Guess what happens when you form an association of dumb people doing dumb things? CPAC, yes I know, but that's obvious. But you also get the the NCAA.

I just laughed out loud at the CPAC remark. Well done.

The NCAA will never be as stupid as CPAC.

Why would anyone spend ANY time watching ANY NCAA event, including KU basketball and football? Whenever I watch a KU or another college sports event (which is pretty much never) it is a rerun so that no advertisers Who support the NCAA get any of my time and attention.

Are you on the wrong site?

Seems weird that somebody who doesn't watch KU basketball or KU football is spending ANY time posting comments on the KU Sports website. Move along sir.

I know Brett McCabe is huge into projection. When he puts down others, which is about as often as most people take in a breath of air, he's really talking about himself.

His analysis is typically first-grade level with a chance of being accurate rate somewhere between slim and none.

That said, I can't figure out if he is just naturally an idiot or if he got messed up somehow through his upbringing or by drugs.

So Lee, and please "Sae" less, you point out what you see as his faults while doing the same thing in your post? 4 times. It is wonderful to see 9 likes for the post too. Somehow I feel superior now too.

Interesting, but not surprising you do not see or understand the irony in what you are saying. Sorry I used a big word - irony = the expression of one's meaning by using language that normally signifies the opposite. Dang more big words.

I do mean what I am saying.

“With the adoption of the new constitution in January, NCAA members committed to resolving cases fairly and in a timely fashion, thus holding those responsible for violations accountable and avoiding penalizing those who were not involved in rule-breaking.”

Thanks, Matt. That's one of the best laughs I've had all year.

So they now believe that they need to dissolve the IARP in order to settle cases in a fair and timely fashion; except for the KU case

Politically we are all living in glass houses. But at least we can throw stones at the NCAA.

So KU’s fate is going to be left in the hands of a committee the NCAA says has been a failure.

Matt, I'm curious about whether some of these changes might affect the resolution of KU's matter. It says there will be "a new standard for head coach responsibility requirements," but what are those standards? Will they be made stricter or lighter? If they're going to be made lighter, is that a factor in KU's favor that the IARP can consider?

I think the photo of Caesar's Palace following this article pretty well sums up the NCAA......it's always a throw of the dice.....and the house usually wins!!

Regarding politics, I guess I am an independent. I'll wait and vote for the party that potentially will screw up the least. {least is relative, after all, Everest is a lot higher than Kilimanjaro but their both pretty damn high!] :)

I do the same thing, which leader is going to do the least damage. "House" usually wins, sometimes the Senate wins right? :)

There are no players left at KU who were around at the time of the supposed "infractions." HCBS is almost the only one on staff who was here at the time - so is he going to bear the full brunt of the punishment if they find out there actually were infractions? How does that not punish the players of this current team? If they're affected, then they are being penalized for something that happened long before they committed to KU.

I think the NCAA gave a huge appealable loophole to KU when they said that the punishment shouldn't be affecting student athletes who weren't part of any infractions.

Not one player played a game for KU that supposedly had been paid by Adidas.

Ultimately, there is no case, and IARP will align its punishment with those facts.

This is an organization that built so much bureaucracy that it failed in its original focus. It's nice to see it trimming the fat, but it still has a lot of trimming to do.

I think Bryce has paid attention to the news and noticed how the government suppressed the Laptop from Hell. That is one of many examples of liberals illegally controlling the narrative and not being held accountable. I would say more but I am a week late.

The IARP has been sitting on this for too long. They need to do what they're going to do and get it over with. It's hanging over our heads and probably hurts our recruiting.