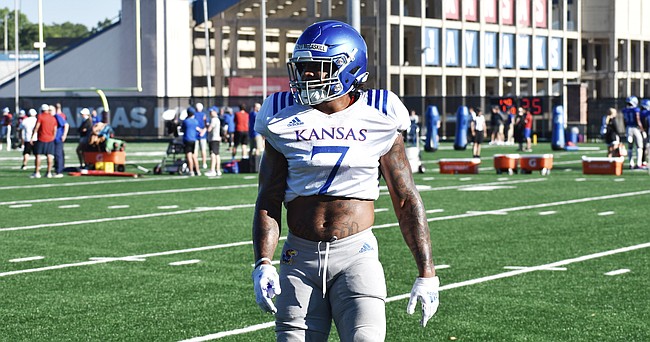 Kansas linebacker Lorenzo McCaskill recovers from a drill during a training camp practice on Aug. 10, 2022.

Yet as he settles in for his first game after his transfer to Kansas, McCaskill is being confronted with a reality that shows just how much change is swirling around the Jayhawks.

Accomplishments elsewhere don't mean much if a player hasn't proven to the Jayhawks' coaches he has earned his role.

Of the 21 players who transferred to Kansas following the end of last season, only seven appear to have a chance of starting the season opener against Tennessee Tech at David Booth Kansas Memorial Stadium on Friday.

The wholesale changes don't mean that Kansas missed its mark in fortifying its roster with experienced upperclassmen. Starting, after all, is just a label given to the players who take the first snap; one could conceivably be on the field for the first play and never return to it, and the coaching staff expects to rotate many players at several positions.

But that so few newcomers are expected to play a significant number of snaps in games early in the season shows just how much the players who were on the team last year have stepped up — and the time needed for the new players to acclimate.

"I think any big transition, you have to get adjusted," McCaskill said. "You have to learn a new scheme, new defense, you know? That was probably the biggest thing. Once you get a hang of it, you're ready to go."

For McCaskill, one of the Jayhawks' marquee offseason additions, that process was uniquely difficult. He decided to leave Louisiana in January, not long after former coach Billy Napier was hired at Florida, and said he received scholarship offers from USC, Texas, Tennessee, Miami, Ole Miss and countless other schools.

But McCaskill had to finish coursework at Louisiana before he could be admitted to a new school as a graduate student, and by the time Kansas processed the sixth-year senior, training camp had already begun.

That means he doesn't yet know what kind of role he'll play against the Golden Eagles, a Football Championship Subdivision opponent, on Friday night. He's still trying to learn the defense, and neither he nor the rest of the Jayhawks want that lack of familiarity to make him a liability.

Dre Doiron, a 10-game starter at Buffalo last season, is the backup center to Mike Novitsky. Topeka's Ky Thomas, a four-game starter and the leading rusher at Minnesota, will share snaps with potentially four other running backs. Eriq Gilyard, who started 23 games over four seasons at UCF, will vie for snaps at linebacker with McCaskill and holdovers Rich Miller, Taiwan Berryhill and Gavin Potter.

Those players may have played significant minutes in the past, but coach Lance Leipold said the perception that anyone would immediately claim a starting role upon transferring to Kansas because of their success and experience elsewhere was always mistaken.

"When we talked from Day 1, we talked about creating a culture of competition that would help our roster as a whole," Leipold said. "It's nothing against anyone who has transferred, but I could go back to my time as a Division III player and coach that as soon as a guy transferred from a high level, everyone was going, 'Oh, this guy's gonna be the answer.' Well, sometimes it is and sometimes it's not."

That may also help someone like McCaskill, who described his playing style as "110 percent effort." Miller, who grew up playing youth football with McCaskill in Detroit and helped encourage him to transfer to Kansas, said McCaskill was told during one practice early in training camp that had to stop hitting players because nobody was wearing pads.

That effort and intensity can be focused into a shorter timeframe, rather than for a good portion of a three- or four-hour game.

"At Louisiana, I might have played 60, 70 snaps a game," McCaskill said. "But you're going to always rotate at that position, especially when you have other good guys in the group."

Kansas' Lorenzo McCaskill on his transfer and playing LB in a new scheme by KUsports.com

Kansas OC Andy Kotelnicki on the Jalon Daniels/Jason Bean competition and the Jayhawks' versatility by KUsports.com

Missed Craig Young in the LB group and almost the same with the DBs, though there is probably a greater avenue to starting for DBs because of how young we are outside of Kenny.

It will be interesting to see how the age of our starters/2deep compares to the rest of football once the games actually begin. We have been one of the youngest teams for the last couple years, but look significantly older this year. 11 super seniors this year vs 2 last year.

If Young starts as some are projecting, that would be a transfer starter at each level of the D. Still, the biggest, as the article points out is how much better the 2-deep is regardless of how’s starting. McCaskill had by far the most snaps played last year at Louisiana, and Miller and Potter both had over 100 more for us. So much better depth.

Most pundits look at our 40+ ppg allowed and say we’ll get better, but stop at 5, maybe 10 ppg. That would be reasonable under normal circumstances. I think there are 4 reasons for a 10-20 ppg improvement: 1. Young guys improving, which is the standard.

Roughly 12 of the 21 transfers were listed in the initial depth chart.

Of course, multiple players (3 or 4), are listed at several positions.

It will be interesting to see the player rotation on defense.

On offense, typically the OLine is stable, but the RB's, TE's, and WR's will also be rotated.