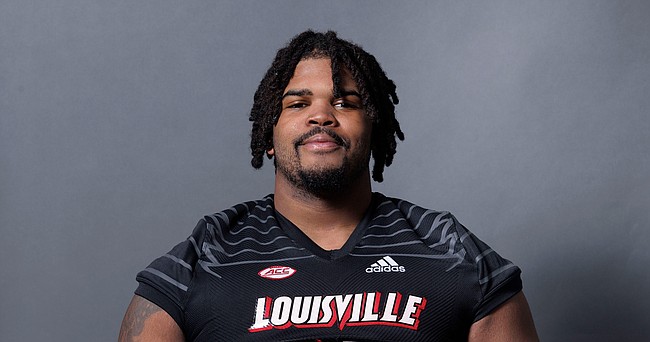 Kansas offensive tackle Kobe Baynes, who decided to transfer from Louisville, is seen in this photo from June 2022.

Kobe Baynes, the offensive lineman who transferred to Kansas last week from Louisville, has had his request for eligibility approved by the NCAA and will be able to play for the Jayhawks this season.

Coach Lance Leipold said Monday that Baynes, a 6-foot-4, 297-pound redshirt sophomore, is able to play guard or tackle. He was listed as the backup right tackle on Louisville's depth chart prior to the start of training camp.

"I think he's bringing another sense of physicality to us," Leipold said.

Baynes, from Jacksonville, Florida, decided to transfer from Louisville on Aug. 16 and was immediately contacted by several schools, some that were able to offer him a scholarship and others that couldn't.

Within a week, he chose Kansas, and on Aug. 23 he traveled from Kentucky to Kansas in order to join his new teammates. He applied for what is known as a "run-off waiver," in which a player and his or her previous school attests that the coaching staff had no intention of playing that individual this season, and the NCAA granted the request.

Baynes, who played in one game last season for the Cardinals, is the fourth offensive lineman the Jayhawks have added via transfer since the end of last season. The other three all appeared on the depth chart released prior to Friday's season opener at David Booth Kansas Memorial Stadium against Tennessee Tech.

Kansas also added two recent high school graduates in James Livingston and Joey Baker. Livingston made the depth chart as the backup right tackle but it seems unlikely either player will hold any significant role this season.

"I think it's pretty uncommon in the Big 12 conference that you're going to take two freshmen and expect them (to develop by) throwing them into the fire," Leipold said. "This gives us a chance to continue to develop and work with other guys, give us one more body."

Four of the Jayhawks' five starting offensive linemen return from last season and all are expected to resume those roles. The only uncertainty stems from redshirt sophomore Armaj Reed-Adams, who injured his left knee in practice two weeks ago.

Leipold said Reed-Adams has been able to resume practicing but it likely will be a gametime decision as to whether he or Puni starts.

OLine depth was a concern going into camp. Maybe not as much now, but still gotta perform when it counts.

A lot of pieces need to come together to show serious improvement this season. But I am convinced we have the pieces it takes to open some eyes and show that it's no longer wise to sleep on the Jayhawks.

Glad to have him. His experience with the wide zone should help him become a contributor sooner rather than later.

RT is the one place on the OL where a true freshman is the backup. It would seem that he eventually slides into that spot, and then we should be a lot more confident about the OL depth, which was one of the areas of concern going into camp.

I previously wrote that "Beef's" waiver chances were slim or none.

Shocking that the NCAA approved Kobe for immediate eligibility!

Good for KU, but bad for transfer portal abuse in the future.

This shows our OL was in poor shape. I'm optimistic every year and hope for the 6 game winning season.

There is some sadness as I read a transfer from Central Missouri, 2 from Buffalo, and one from Louisville, where the coaching staff attested the individual would not have played.

Our line appears to have added some depth, but this seems like a crater that is getting filled with a shovel.

This is also why I like Bean as our QB, the guy is a playmaker that gives the line a chance.

But I still go down the list and hope for a bowl game and ignore those dreaded 10th place finishes.

Jeff - Louisville is the only instance where the coaching staff attested the individual would not have played. All the others were regular transfers. I don’t think it’s nearly as bleak as you project.