By Chris Conde and Zac Boyer 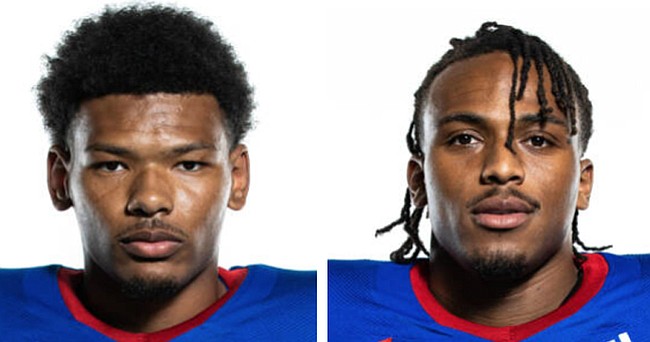 Two Kansas football players were charged with aggravated assault after allegedly confronting a man with handguns, but the case against one of the players was dismissed Friday afternoon in Douglas County District Court.

Trevor L. Wilson, 21, of Tallahassee, Florida, was formally charged Friday with one count of aggravated assault with a handgun, a low-level felony, and his own-recognizance bond was set at $5,000. But the court dismissed the case against the other player, Tanaka Artisma Scott Jr., 20, originally from Mobile, Alabama, for lack of probable cause.

Wilson, represented by attorney Dakota Loomis, appeared in court Friday via Zoom from the Douglas County Jail. The prosecutor asked for his bond to be set at $25,000, but Judge Blake Glover ordered the $5,000 bond instead.

The charges stemmed from an incident on Thursday afternoon where both men were alleged to have threatened a man with separate guns from different vehicles while driving.

According to a Kansas athletics spokesperson, "In light of today’s legal developments with Trevor Wilson, he has been suspended indefinitely from all team activities. Regarding Tanaka Scott, we are continuing to gather more information and will update his status when appropriate."

Police responded to a call around 11:30 a.m. at QuikTrip on the northeast corner of 23rd Street and Haskell Avenue. When police arrived, the witness described two men, one in a red Dodge Charger and the other in an orange Dodge Challenger, pulling up next to him as he was sitting in traffic southbound on Haskell Avenue, Lawrence Police Department spokesperson Laura McCabe said.

The witness told police that the man in the red Charger, later identified as Wilson, opened his car door and stood up, then showed the witness a handgun. The driver of the Charger said some words to the witness before getting back in his car and drove into the QuikTrip parking lot, McCabe said. The witness then told police that the driver of the Challenger, later identified as Scott, followed the Charger and also showed the witness a gun as he drove by, McCabe said.

No one was physically injured.

Shortly after, police located the two men and the vehicles at the nearby Club Car Wash. Police also found two weapons in the men's possession, McCabe said. Police then arrested the men and booked them into the Douglas County Jail around 12:30 p.m.

Wilson and Scott, wide receivers for the Jayhawks, are expected to hold meaningful roles this season. Wilson, a redshirt junior, played in all 12 games last season after transferring from Buffalo and started seven of them. He caught 27 passes for 364 yards, both second on the team, and scored one touchdown. Scott, a redshirt freshman, appeared in two games last year.

Were expected to hold meaningful roles this season. Past tense. Not sure those expectations remain after yesterday’s events.

Memorial Stadium stair running should be in their future..every day at 5am for at least a couple weeks ...you know the other players on the team are very pissed...it reflects on them and the focus needs to be in other areas right now...those 2 players are buried deep in the doghouse on National Dog Day...I do not know how the fans will receive these kids at the home opener...my guess is...they won't be playing any time soon..if at all. I will say this... I'm extremely pissed!

I know that many Americans believe in the right to own a gun(s), but it is a sad state when 20- and 21-year-old students at the University feel the need to carry a handgun in Lawrence? Times have certainly changed since I was a student. The follow is the link to KU’s weapon policy, so hopefully they always keep their guns concealed and in a safe place and off campus. I wonder if these men were educated by the athletic department regarding the University’s weapon policy.

Were these guys part of the “well-regulated militia?”

There are a few truths that have become self-evident....most republicans are either mentally retarded or morally bankrupt or both. Most can't read because they haven't read a single history book that's been vetted or not written by Bill O'Reilly in their lives. They can't read complete sentences, as displayed by their complete lack of understanding of the 2nd Amendment (also known as the slaveholders militarization amendment). They make up lies and whine like little babies when they lose, they glorify military dominance because it helps make them feel superior when they did none of the work. They drive big trucks. Well, we all know why they do that. They date dumb, sloppy women, with 1.5 pounds of makeup and big earrings. They listen to country music. I would rate the republican party in this country as an equal to ISIS, the Taliban and the Three Stooges combined. Awful people all. Virtually in-human.

Anyone who thinks that any republican in this country stands for anything other than self-interest should watch the video of the crazy Karen assaulting innocent women in the parking lot in......wait for it.....wait for it....texas. The problem that my party has is that we continue wasting time trying to be decent human beings and play by the rules with a group of people who are fundamentally soulless. And then we have Bernie babies who are literally as stupid as a nice block of Vermont granite.

When you isolate, humiliate and restrict an entire race of people for hundreds of years - they might.....just might....be both angry and restricted in their "culture" that you created through red-lining, segregation, outright racism and....oh yeah....200+ years of slavery. And if you think that all anyone in that community has to do is just "fly right", then it literally proves everything stated above.

There is no excuse for brandishing a weapon in a threatening manner. None. There is also no excuse that the gun "culture" in black society that has been created in this country by flaccid, insecure white men who spent generations minimizing an entire group of people based on their color can't be reversed by sensible legislation. Of course, you would have to ask a militarized numbskull who finished last in your high school class and is now a fully armed cop to enforce the legislation. That's a 50-50 because, well, most cops are dumb white guys who aren't very bright.

So we have a problem. 80-million people voted to re-elect the dumbest person in every room he has ever entered. And the most soulless....and the most dishonest....and the most insecure. They voted for this half-man because he reflects all of their values: lying, cheating, stealing, dehumanizing, profiteering.....etc. If you think otherwise, then you are as stupid as they are.

And then they blame "black culture"....

I love a good rant as much of anyone, but I also like facts.

Republicans passed the 13th Amendment. Lincoln was a Republican. Democrats were pro slavery and the 4 years after Lincoln was shot, his Democratic VP derailed his reconstruction plans setting us back 100 years.

Eisenhower became the first Republican to win the south since the Civil War.

Our democracy is setup that no party should get everything they want. When one party does the other one will start to win. History backs this up, over and over. That is being tested again right now. A minority (you listed some) are trying very hard to stay in power by any means. Recent primary midterms show that they are losing that battle. People are being motivated to vote against them. Some of the results are stunning. We saw some of this in 2020 too. Their leadership is concerned. A slam dunk flipping of the house and senate 6 months ago, is now going to be a dog fight for them with a laser focused opponent.

No one gets everything they want.

Wow! Totally missed the mention of Mr.Scott and Mr. Loomis being Republican

Thank you McCoob and Comrade.

Sae that whoosh you hear all the time are things going right over your head. This is a good thing.

You think a lot like no intelligent person I've ever met.

Brett, another thing that you could have mentioned: isn't it interesting that when it comes to convictions for corruption and other crimes by politicians over the last 40-plus years, there have been HUNDREDS of convictions under Republican administrations and virtually NONE under Democratic administrations. Gee, what a coincidence that a party that has dedicated itself to protecting the 1% and wealthy corporations for DECADES has ended up with a bunch of self-serving criminals.

BTW, you know how you can find "Republican" in the dictionary? You have to look between "reprobate" and "repugnant."

Trevor Wilson followed Lance Leipold from Buffalo, and they have (had) a very close relationship, according to a KU Sports article from 2021. So, this incident must be very disappointing to Lance. KU Football has been building momentum and this foolish event will set the program back a step.

Trevor was slated to start, and Tanaka was competing for a reserve role. Our new wide receiver Coach Samuel cannot be "a happy camper". Coach Terrence will be scheduling 1 on 1 discussions with Tanaka and Trevor ASAP.

Terrence, Trevor, and Tanaka will then be in some serious meetings with Coach Leipold, in the near future.

Brett, funny that if similar comments were made toward your beloved liberals they would be removed immediately and the poster banned from the site. I'm surprised you read articles about football. Seems like it would be a little rough for you.