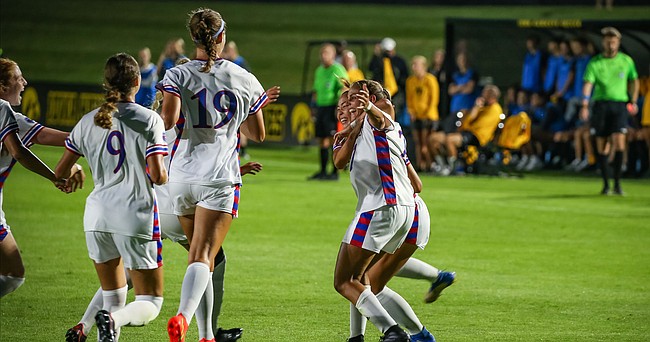 The Kansas women's soccer team celebrates a second-half goal by Shira Elinav in the Jayhawks' 1-0 win at Iowa on Thursday, Aug. 25, 2022.

The Kansas women's soccer team moved to 2-1 on the season and 2-1 against Big Ten foes thanks to a goal from Shira Elinav in the 53rd minute of Thursday's 1-0 win at Iowa.

The goal was Elinav’s first of the season.

The two teams played to a scoreless tie in the first half and Elinav struck early in the second half off of a corner kick from freshman forward Maree Shinkle.

Senior goalkeeper Melania Pasar recorded a career-high seven saves in the game to pick up her second consecutive shutout. Prior to this season, Pasar had just one shutout in her career.

The Jayhawks out-shot the Hawkeyes 15-13 on Thursday night and also had an advantage in corner kicks, 9 to 4.

Kansas (2-1) will continue its road trip on Sunday in Des Moines against Drake. Kickoff is slated for 1 p.m. and the game will be broadcast on ESPN+.

Nice going, Jayhawks! Another header for the win. https://twitter.com/KUWSoccer/status/...

Thanks for the link David. Congratulations ladies.