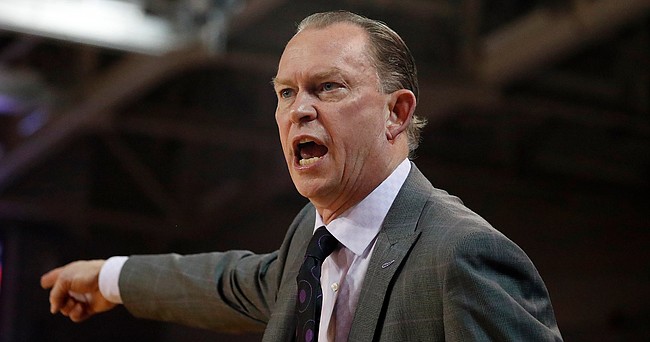 East Carolina head coach Joe Dooley protests a call during the first half of an NCAA college basketball game against Houston in Greenville, N.C., Wednesday, Jan. 29, 2020. (AP Photo/Karl B DeBlaker)

After nine years away, Dooley is returning to Kansas to serve as the Jayhawks’ director of student-athlete development in a new role that figures to add even more talent and experience to Self’s staff.

Let go by East Carolina in March after four seasons as the head coach at ECU — following a successful five-year head coaching stint at Florida Gulf Coast — Dooley, 57, quickly became an attractive option for the KU staff, according to Self.

“When he became available for employment, I thought it was a no-brainer to try and get him back,” Self said in a news release announcing the hire. “He’s played huge role in the success we’ve had. Even though his role will be different this year, I feel like adding Joe to our staff will enhance our program.”

In a Thursday phone interview with the Journal-World, Dooley, who is already back in Lawrence, said he was excited about the opportunity and his new role. He also said being around so many familiar faces made the idea of a reunion sound even better.

In addition to working for Self from 2003 to 2013, Dooley also worked with current KU assistants Kurtis Townsend and Norm Roberts during his first stint at Kansas. He also coached several current KU staff members, including second-year assistant Jeremy Case, along with Brennan Bechard, Brady Morningstar and Wayne Simien.

“There’s always been an affinity for Kansas,” Dooley told the Journal-World. “And I think this is a great opportunity for me to semi recharge my batteries. I can be used in a multitude of ways, depending on what those guys need.”

Dooley returns to Lawrence fresh off of sending his son, Max, off to the United States Military Academy in West Point, New York, for his freshman year of college. While that in and of itself is a reminder of how much time has passed since he last coached the Jayhawks, Dooley said he cherished the months this spring when he got to spend extra quality time with his son. When Max went for runs to prep for college, Dooley often hopped on his bicycle and went along.

“It was enjoyable,” Dooley said. “I probably could have done a couple other things quickly, but I said, ‘You know what, I'm going to spend his last couple of months with him.'”

Now, it’s his wife, Tanya, and two dogs — a boxer and a German Shepherd — who are taking up residence in Lawrence again, ready to try to rekindle some of that magic that once led to nine Big 12 regular season titles, six Big 12 tournament championships, seven trips to the Sweet 16, five Elite Eight appearances, two Final Fours and the 2008 NCAA title.

“I want to thank Coach Self for this opportunity,” Dooley said in the news release announcing his hiring. “Tanya and I are excited to be back. We’re ready to do whatever we need to do to help coach and his staff continue to keep KU at the top. We love KU and what it represents. We loved it the first time and expect the same the second time.”

As for his future beyond the upcoming season, Dooley said he would not rule out being a head coach again “if it was the right situation.”

“I’ve always kind of believed in do the job you have the best you can do it and let everything else take care of itself,” he said.

For now, that means his focus is entirely on Kansas and helping the 2022-23 Jayhawks defend their 2022 national title.

“I think we’ve got momentum,” Dooley said. “But there’s a standard that has been set at Kansas and, you know, it’s Kansas. The goal is always to win a national championship and I think coach (Self) is the ultimate competitor. I don’t think he’s content or satisfied.”

I thought this was already announced two or three weeks ago. Why is it news now?

I was thinking the same thing, slow week at LJW.

It was late last week that word first surfaced (and, yeah, we had a short story then) and then KU made the hire official yesterday, which meant Self formally announced it and Dooley was willing to talk about it.

Nothing slow about it. Staying on top of a story per usual.

Thanks for reading. Have a great weekend!

Hello Matt. You are doing a great job. Your reporting and stories make me feel like I live in Lawrence ! Thank you. Rock Chalk from KU fans in Tulsa

Do we have a list of recruits coming to Late Night?

I hope that Self can help find Dooley a decent job elsewhere.