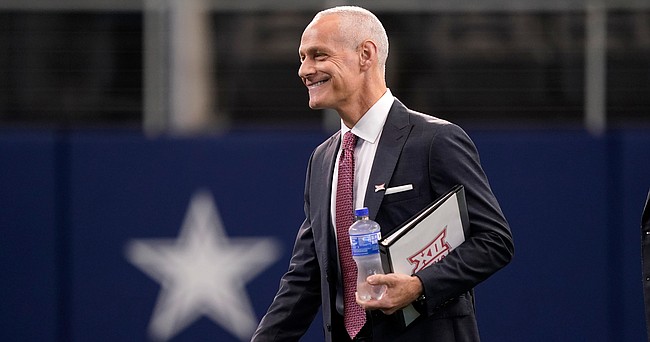 New Big 12 Commissioner Brett Yormark was in Lawrence on Monday, greeted by a full-on celebration of all things Kansas Jayhawks at Allen Fieldhouse.

Yormark, who officially started with the conference on Aug. 1 after taking over for retiring commissioner Bob Bowlsby, made his way to Lawrence as part of his plan to tour all 14 current and future Big 12 schools during a six-week period in August and September.

He called his plan “a listening tour” and said his plan was to meet with top officials, coaches and staff members at each school.

He was not made available to the media during his time in Lawrence, but he did speak, for five minutes, to the Lubbock Avalanche-Journal last week before leaving the west Texas town.

Much of what he discussed with the paper was stuff he covered during his introduction at Big 12 media days in mid-July. That, of course, included his comment that the Big 12 was “open for business.” While many interpreted that to relate directly to conference realignment, Yormark told the Avalanche-Journal that it was more broad than that.

“It’s been received, I think, in a very positive way,” Yormark said. “‘Open for business’ doesn't mean just expansion, where I think some people read into it that it was very much focused on expansion. That’s not necessarily the case. When I say ‘open for business’, it means that this conference is no longer going to be stagnant. We’re going to be very proactive. We’re going to explore and identify any and all opportunities that create value in every respect. Is expansion a part of ‘open for business’? A hundred percent. But it’s only a small piece.”

Yormark addressed the ideal number for the Big 12 to have, saying he did not know whether that meant 12, 14, 16 or more, and emphasized that the only way the conference would expand would be if new schools brought added value.

He also talked about the future of the Big 12’s multimedia rights negotiations and contracts, saying that ESPN and FOX would remain a key part of the future and that he was open to

“The ESPNs and the FOXes of the world are very important partners to us, giving us the broadest reach possible, especially when you think about being national and relevant,” he told the Lubbock paper. “Obviously, a digital partner makes sense because the young consumer today, you need to reach differently. But being with an ESPN and a FOX and a broad-based distributor is going to be very much part of our future and hopefully in five years from now, post our next TV negotiation, we will be with the biggest and best distributors in the business. We hopefully at that point in time will also have experienced some further expansion, which I think is critically important for us.”

While all of that is just a vision for now, it’s clear that Yormark is ready to get to work, through listening, strategizing and acting. Meeting with key members at every school obviously is an important part of his process and he has said he plans to report back with what he learned to the league’s presidents after his campus tour is over.

As for his time in Lawrence, after being ushered into the Booth Family Hall of Athletics on the front of Allen Fieldhouse, Yormark was greeted by KU’s coaches and several staff members and met with both KU AD Travis Goff and Chancellor Douglas Girod.

In speaking to the group gathered to meet Yormark, Goff spoke highly of what Yormark already has done for the Big 12 Conference.

“He’s emboldened our entire league, he’s challenged our leadership in a wonderful manner and it’s an incredibly exciting time to have Brett and his leadership and his lens.”

Goff then told Yormark directly that KU was “bullish about the future of this league.”

A true Jayhawk welcome for the new Commish!

Great to have Commissioner Yormark on campus today!

One thing you learn about Kansas pretty quick…

I am beginning to like the Commish ....we are the best school in the Big 12...no one compares to us...I wish him luck on the expansion....adding Colo Utah and the 2 Arizona schools would be great....but after Coach gets our football program going this year...we are headed to the Big 10 along with Stanford...so I guess he can bring in Fla. State to take our place...but we are moving on.The Big 10 is just waiting for our football program to show signs of life...we already see it...the country as a whole will see it this fall...we will be the talk of college football this season...our coach and his staff and this hungry...smart...competitive group of champions are ready for some football!!!! Get your tickets NOW!!!

What we need to do is invite Commissioner Warren here for the Indiana game on Dec. 17th at the Allen Field House...along with all the Big 10.. NBC...CBS..FOX etc VIP suits for a sit down maybe on Friday evening or early Saturday morning...we are a perfect fit for what they want and it's where we belong in this new age of Athletics ...that's what Dr Girod and Mr.Goff should be planning right now!

So our band shows up in jeans and shorts? Classy!

Brad there is no reason at all for any of those folks to visit KU. The date is good though Football will be over by then for us.

Looks like KU is going to be stuck in the Big 12 for years. Better fix football, eh?

Conference realignment doesn't care about basketball! It just doesn't. No one is coveting Notre Dame because of their basketball program. I seriously doubt one overachieving 6-6 season for KU football gets an invite from the Big 10. We're 10 years too late on a successful football and stadium rebuild.

I just hope we can still nab 4 schools from the Pac12, but that is looking doubtful too.

Brad - While I appreciate your enthusiasm, the financial facts are that we are closer to the bottom of the Big12 than the top. There was a time, maybe a decade ago, when we were clearly #3 behind the latest Benedicts. Unfortunately, a decade in the Bottom 10, decimated the support. That underlines Doug comment why realignment doesn’t care about basketball. He’s also very accurate in pointing out that a radically successful season (6-6) barely changes the decade of dysfunction for those outside KU.

I am excited that we are on the right path with the right leadership, but at this point what do we really have to show for it? A W against a scrimmage school, and one against Pretention University. We’ve been there before and it didn’t change our trajectory. It will take more than one game or even one season. The good news is we can be successful even without the B1G or sec. Focus on us, not on them.

Dirk is right. We earned our way into this position. We will have to earn our way out. No shortcuts. No saviors. Grind this mf out and we will all be far more proud of it.

Dirk- You are right ...football runs the train...Duh....basketball is considered just another minor sport in these kinds of negotiations...for 99% of schools...but we are the 1 percent where it does make a difference....not just because of our record of success...but it's about the venue where the games are played...the feeling you get in that building on a game day is so special that it can persuade...that's why I suggested we have the suits and the commissioner come here on that Saturday to spend a couple days here and of course..attend the Indiana game...one night in the Phog and the suits minds will change about what we could add to their league.... ....on another front...I want us to preserve Memorial Stadium and make the old relic the Phog of football ..and have us be the university that honors and preserves the past for future generations...living...breathing history that people can touch and experience....that is attractive to any league...and it's how we make our pitch to the Big 10.