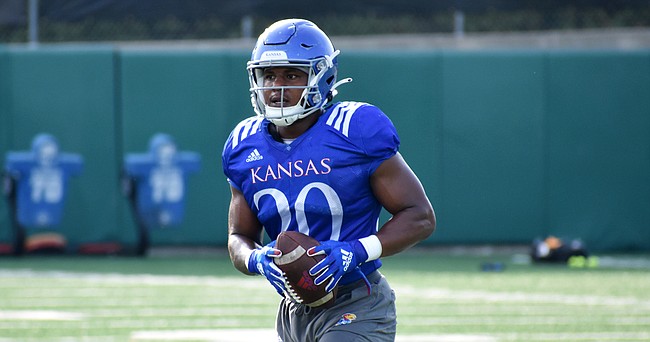 Kansas running back Daniel Hishaw Jr. participates in a drill during a preseason training camp practice on Aug. 7, 2022.

Daniel Hishaw Jr. spent last season recovering from a hip injury that prevented him from being able to play for Kansas. Torry Locklin dislocated an ankle and missed the Jayhawks' final three games.

Despite the additions of two highly regarded running backs in Ky Thomas and Sevion Morrison, as well as the emergence last season of Devin Neal, Hishaw and Locklin have been determined to make sure they're not sidelined again when the season opens Sept. 2 against Tennessee Tech.

"You've got to keep working, you know what I'm saying?" Hishaw said. "Now you've got to work even harder because you've got a setback. You didn't really lose anything. It was just like taking a couple steps back while everyone's still taking their steps forward, so you've got to make sure you're taking even more steps to get there."

Kansas' coaches spent the offseason fortifying a number of positions with transfers, especially players who thrived at their former schools before seeking a change of scenery.

Perhaps none were as impacted as greatly in quality as running back, with Thomas, a Topeka native, joining the Jayhawks after leading Minnesota in rushing last season, and Morrison, one of the top high school players at the position in 2020, joining from Nebraska.

That means five running backs are competing to carve out roles with the Jayhawks. It's common for teams to have only three play on offense in one game, but offensive coordinator Andy Kotelnicki has been tasked with trying to find wrinkles that will allow them all to consistently take snaps this season.

"They're just trying to get more of us out there so we can put pressure on the defense," Locklin said.

Hishaw, who is 5-foot-10 and 215 pounds, was the Jayhawks' second-leading rusher as a freshman in 2020 when he carried the ball 52 times for 229 yards and two touchdowns. During training camp a year ago, however, he tore "something" in one of his hips — "It was just a rare injury," he said — and wasn't cleared to play all season.

Locklin, meanwhile, emerged as an option by running 36 times for 117 yards and two touchdowns as a redshirt sophomore. At 6-foot-2 and 210 pounds, the coaching staff experimented with lining him up as a receiver, and he caught three passes for 24 yards, including one 20-yard touchdown catch against Duke, before his season ended Nov. 6 in the loss to Kansas State.

Running backs coach Jonathan Wallace said that despite their injuries, neither player was disengaged last season. They remained just as active in observing their teammates during practice and taking part in the required football-related instruction and film work.

Coach Lance Leipold said last week, as training camp neared its conclusion, that Hishaw "has done an outstanding job" and has "had as good a camp as anybody." Described as an all-around back, Hishaw's power and speed should make him an adequate complement to Neal and Thomas in the Jayhawks' zone-running scheme.

Locklin's use throughout training camp has been more varied, and it seems that he'll continue to see additional opportunities, like Morrison, as a target in the passing game.

Hishaw said sitting out last season and welcoming the additional running backs to the team weren't as difficult as one would expect. The scheme, he believes, will allow him to thrive.

"That's why it is so exciting for them to come in here — the fact that we could even have more running backs on the field at once," Hishaw said. "That's going to make teams (say), 'What are they doing out here?' It's just really fun to have them here so we can do personnel like that and have multiple people on the field."

Kansas football coach Lance Leipold sizes up the state of the team 2 weeks out from Week 1 by KUsports.com

Such a good testament to the players and coaches to have so thoroughly embraced the competition within. Not sure I would have been as confident in prior staffs’ ability to create multiple options, and some clearly showed they couldn’t. Hopefully we can have close to as many options at the end of the season as we do now.

FYI, every time I select a story on the kusports.com home page, the article comes up in "mobile" vs "Desktop" mode. I'm using a desktop...

You can scroll to the bottom of the page to switch to desktop. I reset my home page to the desktop page and that helped solve the problem for me in Safari and in Firefox.

Thank you for posting this. I don't think I ever would have found that on my own. You fixed it!

Depth is hard to develop with the fluidity of college football. At the end of last season, KU was relying on a beat-up Neal to carry the load with virtual no back up. It is good to see how far Leipold and his staff have gone in one year to develop some level of depth across the entire team. The projection by one national prognosticator of KU finishing ahead of TCU and West Virginia in the Big 12 is testimony to what coach Leipold is trying to build. Let’s hope that the team remains healthy and that the efforts of many results in more victories on the field. Rock Chalk.

Well said Andy, and nice that you could find one person that goes past - KU was bad last year as they have been for the past decade. Expect more of the same. Some don’t even recognize all the transfers. Mailed in months ago.

While the staff has done a great job, it’s also fortunate that the ncaa waived the annual recruiting limit. It wouldn’t have saved most of the past staffs, but would certainly have helped with the size of the hole.

Just thought about the ability to have 3 QBs on the field at one time. Most people seem to be sleeping on Torry because of all the RBs in front of him. Locking forward to seeing Andy’s creativity with all the options available.