Despite injuries to two starters, Kansas ends training camp ‘in as best shape as possible’ 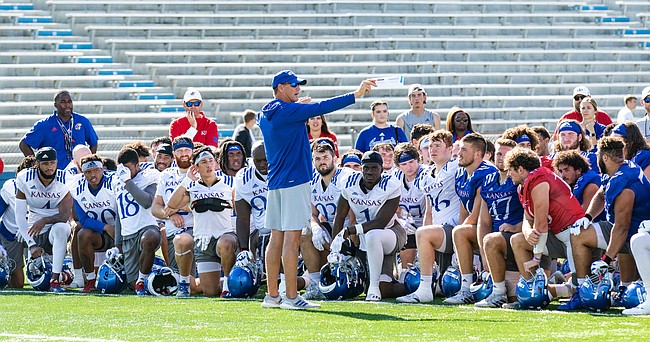 Kansas coach Lance Leipold addresses his team at the end of practice at David Booth Kansas Memorial Stadium on Aug. 20, 2022.

The two players, who are expected to start the season opener on Sept. 2 against Tennessee Tech, didn't join their teammates on the field until midway through the roughly 90-minute session.

"They've been out now most of the week," coach Lance Leipold said. "We're still waiting to see, but we expect them back soon."

Reed-Adams wore a thin brace on his left knee and Sampson had no additional support or bandages visible once they took the field. Both stayed afterward to sign autographs and meet with fans who attended the event.

With Reed-Adams out, redshirt senior Dominick Puni, a transfer from Central Missouri, has been filling in with the top unit. Sampson, who is expected to man the top pairing alongside sixth-year senior Sam Burt, had his absence filled by redshirt senior Eddie Wilson.

Collectively, the Jayhawks have been relatively healthy throughout training camp; the only player who has missed several days is sophomore safety Jayson Gilliom, who has not practiced at all because of an unspecified injury from the spring.

"The closer we get to kickoff, we want to make sure we're in as best shape as possible," Leipold said, "and hopefully, we continue to practice in a way that we're as close to full strength as we can be."

Saturday's practice means training camp has ended and it's time to get ready for the season opener.

"You put all this work in, especially from January to now, and you get close to what you're doing it all for," Leipold said following the practice, which was held in front of roughly 350 fans. "Sometimes, I struggle if you're not excited about it. You put eight months of work into something and then I'd hope you'd be embracing the excitement to get there."

After taking Sunday off, players will begin classes Monday and embrace more of a traditional schedule that will include practices in the morning followed by schoolwork.

The Jayhawks wore shells and shorts for Saturday's practice, which meant the physicality and intensity were ratcheted down from a normal session. Leipold also gave a significant number of reps during team drills and seven-on-seven work to backups and those who had missed time earlier in camp through injury or illness.

"Camp was a grind, but there's a game in sight," senior tight end Mason Fairchild said. "There's a lot of excitement. As the game gets closer, it's going to feel like time is slowing down because you're waiting for that game, but it's going to get tough because school's starting and all the distractions, but staying focused on the game is what we're focusing toward."

I’ve heard good things about Puni, and nice to go 6-8 deep with mostly veterans at DT. All the super-seniors is such a stark contrast to last year whe I think we had 2. IMO, that is a complete testament to the community that Coach has built into the program. It also shows up in players recruiting their former teammates and childhood friends to join the program.

Camp is over...now it's time to put the blinders on....total focus on your school work...your playbook and your assignments... on and off the field!!!!The school work is going to help you go Pro at whatever you want to train and study for!! Total focus!!!...GOOD LUCK!!!