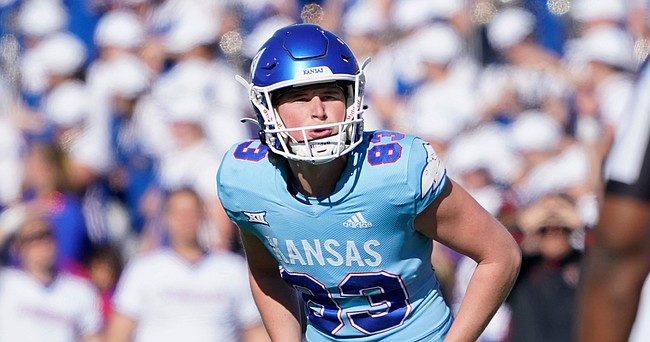 Kansas kicker Jacob Borcila prepares to attempt an extra point during a game against Texas Tech on Oct. 16, 2021, in Lawrence, Kan.

Kansas kicker Jacob Borcila is hoping that a physical transformation over the summer will lead to a change in mental approach come this season.

Borcila, a redshirt junior, made just nine of his 15 field goal attempts last season, the worst success rate in the Big 12 among full-time kickers. That followed a redshirt freshman season in which he made six of his nine attempts.

Understanding that what he had been doing wasn't working, Borcila set out during the offseason to add power in his legs. The plan, created by the team's strength and conditioning staff, first required Borcila to add 30 pounds before returning for summer workouts.

Then, once he returned to campus, he partook in workouts and followed a diet meant to strip away the fat he had gained, give him with the strength he wanted and leave him with a net gain of about 10 pounds.

"Of course, last year wasn't the year I wanted," Borcila said, "but this offseason, I put in a lot of work bodywise and strengthwise so this season, I can be a lot more confident when I'm back in my steps kicking those balls through the uprights."

Borcila will handle field goal and extra-point opportunities this season, with junior Tabor Allen again taking the field for kickoffs.

Kansas' special teams have received a makeover with the appointment of Taiwo Onatolu, who had coordinated special teams with coach Lance Leipold at Buffalo, to that role in February.

"I think it's going to translate well for the sake of the team," Borcila said. "So, I mean, everybody — those coaches know exactly what's expected of the players and the players know what's expected of them by each coach. We're not settling for average. The best players are going to play on special teams and we're going to be one of the best special teams units in the country. That's our goal."

"The way we've kind of broken up (responsibilities), very happy the way Taiwo has handled the coordination of our teams and kind of broke them back up with lead coaches," Leipold said. "But obviously, we know how important they are."

The coaching staff needs to have confidence in their place kicker. Sixty percent does cut it and often changes how the offensive coordinator plans/calls the game if they don't trust their place kicker will reliably score. In past years, it was clear KU coaches took more risk on 4th down or punted even though the offense was in field goal range. Having a reliable kicker is very important to keep KU in games (although in the Big 12 you don’t want to always trade touchdowns for field goals). Hopefully, the new off-season training regimen pays off. Rock Chalk.

I agree Andy that depending on confidence in Borcila (or whoever is kicking) will help dictate playcalling decisions. If they know he'll make the kick, then that takes some pressure off the offense on 3rd down hoping to pick up the first down.

The other major component of kicking (and our punting) that wasn't covered in this article is the ability of the line to effectively block. I couldn't find stats on it, but I remember multiple times last year where we had field goal attempts and punts blocked and it completely killed our momentum and confidence in the game. Hopefully that has been a point of emphasis to help our specialists settle down and perform without having to factor in whether or not they'll get blocked.

Benny, those are good points. While some blocked kicks are the kicker's fault, most are a result of a failure up front. And failures up front can also get in a kicker's head - it can become a bad cycle. I'm not expecting miracles, but I think that we'll see a solid step forward in this department this fall.

ST should be one of the unsung beneficiaries of the added depth. Being able to have Ky or Devin returning kicks, as well as all the unsung players in those units, shows the greater depth we have, and should payoff across the board.

I still expect Lance to go for it more than most coaches.