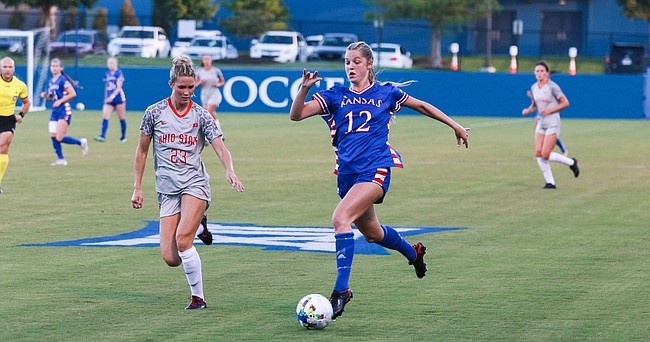 The lasting image of Thursday’s 1-0 Kansas soccer loss to Ohio State in the season opener at Rock Chalk Park was sophomore Raena Childers leaving the field with tears in her eyes following the postgame team meeting.

After playing the Buckeyes tough throughout and even-up on the stat sheet for most of the game, the Jayhawks (0-1) fell victim to one break that went against them and lost the opener on a beautiful August night in front 656 fans.

Despite the disappointment that Childers clearly felt, Kansas coach Mark Francis said he loved to see that kind of passion from one of his leaders and top players so early in the season. 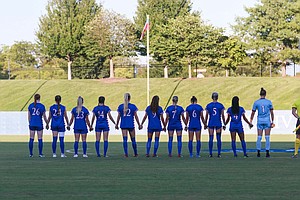 “Absolutely,” Francis said. “She’s just frustrated; I think probably in her own performance as much as anything. If she didn’t care then she wouldn’t be getting upset. She’s a competitor and she’ll bounce back.

“We competed with them,” he added. “We made the game tough for them. For them, it’s a good win on the road and for us it’s a tough loss. Not a bad loss, but a tough one.”

The Jayhawks nearly did just that themselves in a game that featured both teams trading opportunities in both halves.

After a scoreless first half, it was the Jayhawks who tilted the field in their favor, jumping into the attack and producing a couple of quality chances.

The Buckeyes’ defense never buckled, though.

From there, Ohio State took its turn dominating possession in the Kansas end, but the KU defense also was up to the task of turning away every threat.

Few moments were as big as the save by KU goalkeeper Melania Pasar on OSU’s Emma Sears, who completed a long run deep in the box and flipped the ball toward the net with the outside of her foot. Pasar met Sears at the ball and deflected it out of bounds.

Ten minutes later, Ohio State produced its best scoring chance of the second half to that point, when Peyton McNamara ripped a shot to the left post from 25 yards out that Pasar pushed just wide. The ensuing corner kick was harmless and KU easily cleared the ball to the other end.

Sears finally broke the tie in the 69th minute by making a long run to collect a pass through the midfield from Kailyn Dudukovich. After two quick touches to get space from KU junior Mackenzie Boeve, Sears ripped a shot across the box to the opposite corner of the net that just beat Pasar to her right and found its way inside the post and into the net.

“The goal the kid had, I mean, it went in off the post,” Francis said. “(Pasar’s) not going to get that. It was a really good finish.”

With just over 18 minutes to play, KU freshman Lexi Watts ripped a shot that hit the OSU goalkeeper’s feet behind her as she was diving to her left. Watts had just checked into the game and immediately gave the Jayhawks a spark one of their best scoring chances. Ninety seconds later, KU junior Shira Elinav added to KU’s shot total, but the slow roller never posed a threat.

With just under 8 minutes to play, Elinav followed a shot on goal and nearly slipped it past OSU’s goalie for the equalizer, but she was upended and the ball stayed out of the net.

“I was just running toward the goalkeeper, just trying to create something,” Elinav said after the loss.

Despite the setback, the junior from Israel said she was proud of how hard her team played and thrilled to have the season under way.

“It was amazing,” Elinav said of the opener. “The team has been waiting for this moment since last October and we were really happy to be back. Obviously it’s disappointing (to lose), but I think we’re improving week by week and we’ll just go and bring our all next game and try to win it.”

Next up, KU will play host to Northwestern at 1 p.m. Sunday at Rock Chalk Park. It will mark the second of a stretch of four matches in five tries against a Big Ten opponent to open the season.

It also will give the Jayhawks an opportunity to show they can finish game’s like Thursday’s which plagued them throughout much of last season, as well.

“You’ve got to get a result,” Francis said. “And Sunday’s a massive game for us.”