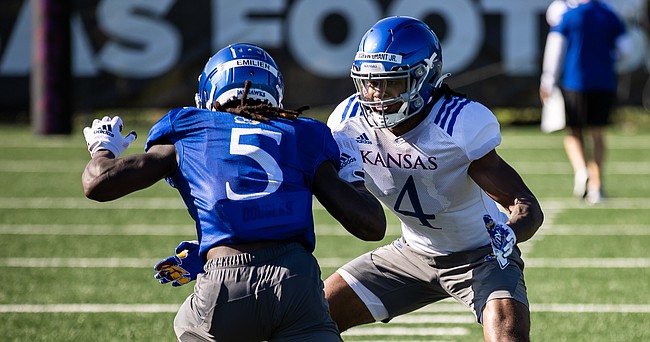 As Marvin Grant Jr. began acclimating himself to the specifics and intricacies of Kansas' defense this summer, he started to recognize parallels between what the Jayhawks run and what he did at Purdue.

If Grant can duplicate what he was able to accomplish with the Boilermakers last season, he'll prove to be a quality addition.

Grant, a 6-foot-2, 205-pound redshirt junior safety, may have the highest profile of the 20 players who transferred to Kansas in the past eight months.

A 13-game starter at Purdue, Grant finished second on the team with 75 tackles last season and broke up three passes. He decided to leave following the spring game and transferred to Kansas, where he is projected to start alongside senior Kenny Logan Jr. when the season opens at home against Tennessee Tech on Sept. 2.

"They're definitely going to get a physical player this year," Grant said Wednesday at the team's annual media day event. "They're going to get a physical player. I'm looking to showcase more of my ball skills and be more of a ball hawk and be around the ball more — not look to make a lot of plays or look to make the biggest plays, but when the play is coming, make the play. Any chance I get to make a play, I'm gonna do it."

Under coach Lance Leipold and defensive coordinator Brian Borland, Kansas has divided its responsibilities at safety. The boundary safety roams the middle of the field and helps in run support while the field safety is a bit more involved in man-to-man coverage and plays deeper.

Grant said he was more of a boundary safety at Purdue but has split time at the two positions during training camp. The coaches want each safety to be able to play both, but in Grant's case, the move may be made out of need: Logan, whose 113 tackles last season were the most by any safety playing at a Power 5 university, was the boundary safety.

"I talked to both of those guys about, 'Hey, in the course of time, there's a chance that both guys are gonna be on the field at the same time. You can't be standing one behind each other over there into the boundary,'" Borland said. "So, they both take reps at the field safety for us as well, and then it's my job to evaluate how I feel if they're both out there at the same time."

As Grant began learning Kansas' defense, he noticed that many of the plays were similar to what he had already picked up during his three years of college. To make that process simpler, he would take notes of what was called and write down what its equivalent play was at Purdue.

The biggest difference, he said, comes in the hand signals that are relayed to specify each player's responsibility on each play.

"Everything's starting to be way much smoother than when I got here," he said. "It just came from just watching film and just getting the feel of everything and how everything's been played."

One thing that's immediately noticeable upon watching Grant play is his length. Defensive backs coach Jordan Peterson said Grant's long arms have already shown to be an advantage during training camp and that Grant is able to use his leverage to wrap opponents during tackles and punch the ball away.

"From a physicality standpoint, he'll strike you," Peterson said. "From a coverage standpoint, his footwork is decent. He's able to use his length to make up any kind of deficiencies of footwork. Again, the longer he's in the defense, the more comfortable he's going to be and the more confident he'll be able to play. These next two weeks are going to be critical as far as just continuing to gain that level of confidence."

And while he continues to find that on the field, Grant isn't lacking for confidence away from it. He's one of three players from the Detroit area who transferred to Kansas in recent months — cornerback Kalon Gervin and linebacker Lorenzo McCaskill are the others — and two who played for the Jayhawks last season, linebackers Rich Miller and Cornell Wheeler, were instrumental in leading him to Kansas.

In fact, he played youth football with Gervin and Wheeler, McCaskill grew up with an older brother of his and Miller was a teammate at Detroit's Martin Luther King High.

"The chemistry's still there, so it's all good," he said. "I can't wait until the season starts up and we can start winning with those guys."

If I were to pick one place where I could add an impact player, I think that it would be safety. Having a guy who can prevent over-the-top big plays, and who can shorten big runs is absolutely huge when it comes to keeping us in games and preventing blowouts. Grant sounds like just the kind of guy who could help us big-time this year.

Brett - Definitely, though maybe there won’t be as much need for an impact safety in the run game with improved LB. That’s not meant to be a demeaning comparison to last year, but just that there are twice as many so who ever is in the game should be fresher.

I’m a little pumped because I just listened to a Phog-cast with Brandon McAnderson. While he is very much a hometown guy, he doesn’t seem like a pretentious rah-rah type of guy. He talked a little in the beginning about the teams he was on, even before the OB team, and making the transition to a Big12 team. Being able to go out and smack them in the face.

The young guys are older, and a bunch of experienced guys have been added. It is definitely worth listening to.

Love McAndreson on the radio. Should be an immediate replacement for Lawrence, who is GOD Awful.

Sorry, but we have the worst football announcing team in the history of radio. Would someone please tell David not to step on the play-by-play?! Not that the pbp is any good....it's like listening to Foghorn Leghorn doing an impression of a Truck Rally announcer. We went from Bob Davis to this? Thanks again to the worst AD in the history of P5 sports. It's literally unlistenable.