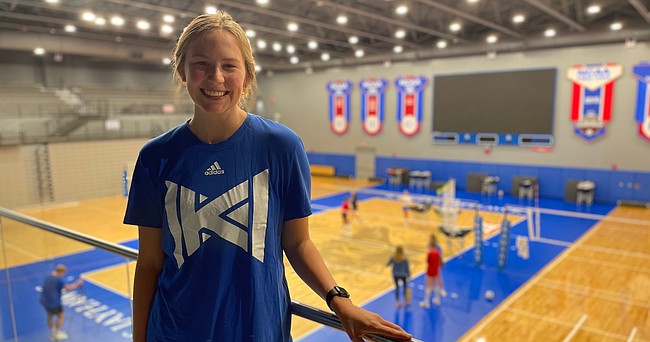 Kansas volleyball senior Rachel Langs, shown here before a recent practice at Horejsi Family Volleyball Arena, is back with the program for her fifth season.

Kansas volleyball player Rachel Langs, a fifth-year senior from Fairview, Texas, spent four years falling in love with all things KU and four months hoping she could stick around.

The news that she would be able to play her fifth and final season of college volleyball for the Jayhawks this season came in mid-April after an agonizing stretch of nearly 16 weeks of waiting.

It wasn’t that the 6-foot-3 middle blocker who has started 88 matches during the past four years needed a spot on the team. That was a given. KU coach Ray Bechard told her as much when the NCAA granted athletes an extra year of eligibility because of the COVID-19 pandemic.

“She’s a quality human being,” Bechard said of Langs in a Wednesday interview with the Journal-World. “And I don’t think anyone on our staff ever has to worry about how she represents our program on or off the court. It’s huge to have her back.”

The question about Langs’ KU future came on the academic side of things.

Already well on her way to earning her undergraduate degree at the time, Langs applied for entry into KU’s speech pathology graduate program in January. The school, which is ranked No. 6 nationally among public institutions by U.S. News and World Report, only accepts 30-35 applicants each year, which Langs said made her more than a little uneasy about her future.

To cover her bases, she applied to other speech pathology programs at other schools where she knew she could play volleyball, as well. But she was not accepted by any of those. To make matters worse, KU first put her on a wait list, drawing out the process for two more weeks. 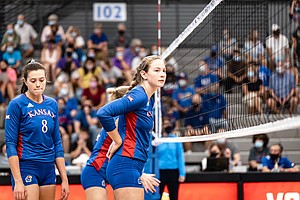 KU senior Rachel Langs waits at the net for the action to start during the Jayhawks' win over Albany on Saturday, Sept. 18, 2021 at Horejsi Family Volleyball Arena.

While Langs and the rest of the Jayhawks waited for her to be accepted, Bechard did what he could to ensure that she’d have somewhere to play this season, calling friends in the coaching industry to nudge them to save a spot for Langs in case she needed to leave KU.

“It was definitely a stressful time,” Langs told the Journal-World this week. “But once I found out I got in, it was a no-brainer that I was staying. And I couldn’t be more excited about it.”

KU’s speech pathology program spans two years, meaning Langs will be in Lawrence until 2024. She’ll only be able to play volleyball for one of those years, though, and she and her coaches are determined to make the upcoming season her best yet.

Often overshadowed by teammates with bigger statistics, more athleticism and louder personalities, Langs found her niche as one of the Jayhawks’ most steady players.

“There’s a consistent presence that she brings,” Bechard said of the Jayhawks’ smooth and sunny veteran at the net.

While most of that is tied to her personality, her statistics are often pretty steady, as well. She rarely delivers the highlight stat line of the night, but always does enough to have her effort show up on the stat sheet after. By season's end in 2021, Langs ranked fourth on the team with 161 kills and a team-best 131 blocks.

Langs prides herself on being someone her teammates can look to in good moments and bad for a sense of calm, and she hopes to become more of a leader in the months ahead.

“I’ve had a voice on the court during the past couple of years, but I definitely want to take it to another level this season,” she said. “Last year, I wasn’t sure if it was my last year or not, but this year, since I know it is, I really want to cherish every moment and have a season similar to last year, with our team making another run.”

The 2021 Jayhawks reached the Sweet 16 after catching fire late in the season, and Bechard and Langs believe that type of run — and potentially more — is possible again in 2022. What’s more, the veteran KU coach said he thought Langs could have a big say in just how much success the Jayhawks have this season.

“She’s been kind of the sidebar in a lot of cases, but Langs has pretty much been a four-year starter for us,” Bechard said. “This year, we’re challenging her to impact the match in more ways and hoping that this will be the best year that she’s had here.”

According to Bechard, Langs’ calming presence and persistent positivity is “just her.” Langs, who smiled when she talked about it, said she always has operated that way and that her understated approach occasionally has helped her on the court when she does play at a higher level and with more intensity.

“I don’t think people always see it coming,” she said of her bigger statistical games. “It’s nothing I do, really. I would play like that every time if I could. I just think it just happens and it’s just the flow of the game and how things are going that day.”

With last season’s memorable run still fresh in her mind, Langs is hoping that this year’s team will be able to start as fast as it finished.

No matter how the season plays out, though, Langs is thrilled to have the opportunity in front of her and appreciative of the chance to be a Jayhawk a little longer.

“It was a real confidence boost for me to know that Coach B wanted me here and wants me to stay as long as I can,” she said. “Just knowing that he sees something in me that he wants to keep around is really special.”

Langs and the Jayhawks will host a team scrimmage this weekend before opening their schedule with a home exhibition match against Drake on Aug. 19. From there, it’s on to the regular season, which will open Aug. 26 at the Utah Classic in Salt Lake City.