NCAA President Mark Emmert stepping down no later than 2023 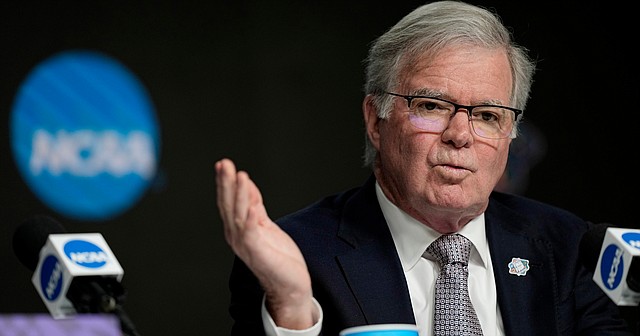 INDIANAPOLIS (AP) — NCAA President Mark Emmert is stepping down after 12 tumultuous years leading an association that has become increasingly marginalized while college sports has undergone massive changes and been besieged by political and legal attacks.

NCAA Board of Governors Chairman John DeGioia announced the move Tuesday and said it was by mutual agreement. The 69-year-old Emmert will continue to serve in his role until a new president is in place or until June 30, 2023.

The move is not entirely a surprise. The NCAA remains the biggest governing body in college athletics, but it is has been under sharp criticism for years as too heavy handed and even out of date with Emmert serving as the prime target.

Emmert has guided the NCAA through the most transformative period in the history of the more than 100-year-old organization. During the past decade, athletes have gained more power, benefits and ability to earn money than ever before. Amateurism has been redefined.

But Emmert has been viewed by some as not a catalyst for change but as an obstacle standing in the way — or at the least reactive instead of proactive.

“Throughout my tenure I’ve emphasized the need to focus on the experience and priorities of student-athletes,” Emmert said in a release from the NCAA. “I am extremely proud of the work of the association over the last 12 years and especially pleased with the hard work and dedication of the national office staff here in Indianapolis.”

The announcement comes one year after the board approved a contract extension for Emmert that ran through the 2025, a move that left many in college sports bewildered. Emmert’s salary was nearly $3 million in 2021.

The NCAA has suffered a series of damaging court losses in the past decade that peaked with last year’s 9-0 Supreme Court ruling against the association in an antitrust case. The decision undercut the NCAA’s ability to govern college sports and prompted a total overhaul how it operates.

Years after losing an antitrust case over the NCAA’s use of athletes’ names, images and likenesses, the association finally changed its rules last June to allow the athletes to profit as paid sponsors and endorsers. The move came only after state lawmakers passed laws to neuter the NCAA’s power. With Congress unwilling to provide federal protection, the NCAA has been unable to regulate NIL activity with uniform rules — leading to fresh criticism.

Emmert has been called before lawmakers in Washington numerous times over the past two years. Attacking Emmert and the NCAA has become one of the few things that has united Democrats and Republicans during these divisive political times.

Emmert was appointed to the job in April 2010. He had led the University of Washington and LSU prior to taking over in Indianapolis. He replaced Myles Brand, who held the position for seven years before dying of cancer in 2009.

NCAA revenue has reached more than $1 billion per year under Emmert, primarily through the TV deals for the men’s college basketball tournament, and most of the money is redistributed to more than 1,100 member schools with nearly 500,000 athletes.

Still, the disparity between what the wealthiest schools bring in compared to what the vast majority of schools spend on athletics has made it difficult for them all to coexist under one umbrella organization.

NCAA member schools adopted a new constitution in January and are in the process of “transforming the structure and mission to meet future needs.”

“With the significant transitions underway within college sports, the timing of this decision provides the association with consistent leadership during the coming months plus the opportunity to consider what will be the future role of the president,” DeGioia said. “It also allows for the selection and recruitment of the next president without disruption.”

In a lengthy interview with AP in August, just months after being hammered by criticism for the NCAA’s inability to provide equitable facilities and amenities for the men’s and women’s basketball players participating in the Division I tournaments, Emmert said he was still passionate about the mission of a leading college sports during volatile times.

“And I’m not surprised that people say, ‘You know, why isn’t this getting fixed? What’s Emmert doing?’” he told AP. “And people also, they want to look to somebody and say, ‘Well, fix this, damn it!’ And I get that. I understand. And I say it in the mirror sometimes. But the truth is, it’s a very complex system. I think we do need to find ways to fix that and streamline it.”