Kansas’ Lawrence Arnold chooses to stay on football team, will not transfer 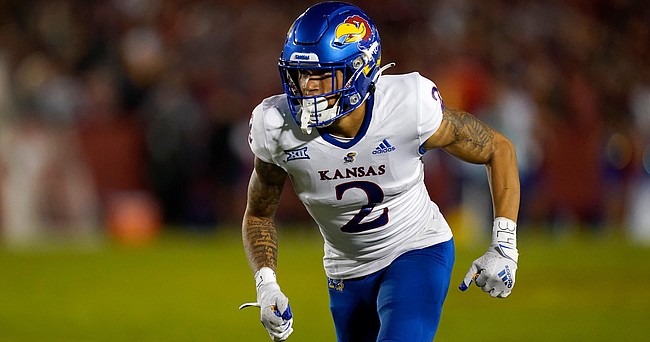 Kansas wide receiver Lawrence Arnold runs on the field during the second half of a college football game against Iowa State on Oct. 2, 2021, in Ames, Iowa.

Despite sharing his intentions to transfer from Kansas last week, wide receiver Lawrence Arnold has decided to remain at the university and on the football team following conversations with coach Lance Leipold.

Arnold, who will be a redshirt sophomore in the fall, was among 11 players who at least publicly expressed an interest in transferring once spring practices concluded on April 9.

He started nine games last season and played an integral role in the passing game, and he figured to be one of the Jayhawks' top targets again this season.

"I just think he finally had a chance to sit down with Coach and talk to Coach," Claude Mathis, who was Arnold's coach at DeSoto High in Texas when he was a senior, said Monday. "They're on the same page now. I think it had a lot to do with his role and with the offense, and now that they had a chance to sit down and talk now, I think they've kind of worked some things out."

Mathis said he spoke to Arnold earlier Monday but did not know what his concerns about the offense may have been. Arnold never formally entered the transfer portal, which does not prevent a player from transferring but makes it easier to be recruited by other schools.

"I'm just looking for a big year from him this year," Mathis said. "I know that he worked his tail off. He's one of those guys that you never have to worry about his work ethic. But I just think that since they resolved this now, he can just focus on his academics and focus on playing football."

Arnold tied for second on the Jayhawks with 27 catches, matched a team high with three touchdown receptions and was fourth with 316 receiving yards last season.

He spent much of spring practice as one of Kansas' top wide receivers and, at 6-foot-3 and 197 pounds, is a taller, experienced target the Jayhawks otherwise do not have.

Arnold played in four games as a true freshman in 2020, allowing him to preserve his redshirt season, and was limited by a shoulder injury in spring practice a year ago.

"I think you're just going to see a different kid," Mathis said. "He's healthy right now and I think he has everything under control mentally right now. He's doing good. He's on top of his academics. I'm just looking forward to seeing a healthy LJ this year and a young man who's trying to help the Jayhawks win a Big 12 championship."

Excellent! He has so much potential, and we have the coaches who know how to maximize his performance. I was very unhappy when I thought he was leaving and am very relieved to hear he will be there for us. I really think our young receivers are going to do very well this next season.

Interesting to hear that he never actually entered the portal. Better to hear he’s returning.

Coach and Coach have shown they will adapt the O to fit the personnel. Right now, it seems we have relatively more RBs and TEs than WRs, so maybe more 22 (?) plays, with 2 RBs and TEs, than 4 WRs, but they’ll still get the ball to whomever can make plays. LJ should definitely see his share of action.

I don't think he's going to regret staying. I believe this because if we have a one/two punch in the running game, plus a QB that is a threat to run, it will open up routes for Arnold to have success. He might not get 100 catches this season, but I can see him getting 75 to 80 and 8 to 10 TDs which would a great contribution to this program moving forward. He will still have 2 more years after that to build on that. I am glad that he is staying. We need him.

Mickey, I agree. A rising tide lifts all boats, and an offense-on-the move lifts all skill positions. When an offense can create stress on a defense, then opportunities open up all over the field. Although I absolutely detest the KC Football Team, there are always plenty of statistics to go around due to longer drives, more possessions, more opportunities....

I think that this is good news that Arnold is staying but I do detect a slight bit of either ego or head case. Let's hope that it's neither. In the end, better to have him than not as long as he doesn't become a "me" on the team.

He's a youngster. He's been hearing from media, and, especially, from us commenters, about how we're loaded at RB and will mostly go with the ground game now. That's not something a young WR with aspirations wants to hear. It took his past and current coaches to clear that air and make him understand how it will work. I don't blame him at all. He's just a youngster with a dream who reacted to what he was hearing.

How come the reply button does nothing. I can't aim a comment to a particular existing post unless I copy paste or type a reference.

Dale - The no reply reply button is a bug since the FF. They’ve at least got comments working again - for the NC, but not the reply button. Interestingly, that’s just a desktop feature. There is no such feature on the mobile site.

Mickey - Even more important than a QB that is a threat to run, is a QB that will complete more than a coinflip of passes. Gotta be better than 2/3 or there’s little chance of success and Daniels was completing 70% last year. Love Bean’s wheels, but a QB has to complete passes or find a new place.

Dirk, I do agree with you. JD has wheels, not the speed that Bean has, but enough with some depth at running back now that he can find some openings and get some big gains, and JD is also a stronger runner and run through some contact as he demonstrated against Texas.

Brett, I hope it isn't an ego thing. And I am thinking that maybe it was some other program, maybe within the Big 12 that was trying to lure him over by bad-mouthing Kansas and maybe making him feel bad for playing at Kansas. I do not know, but with the transfer portal, this is going to be part of the new culture where programs were stab others in the back in order to lure players that they need to fill roles from players graduating or going into the draft. Arnold was clearly our best receiver in the Spring Game, it would be a big deal to lose him. I hope that our fans rally behind this kid.

Arnold get an upgraded NIL deal?

Now, if we can just get Chris "Simms" Teahan eligible.

Who can forget the 50+ yard bomb to Lawrence Arnold at the spring game.

L.A. is definitely a very good wide receiver. Happy he is back.

Dirk, thanks for the reply button explanation.

I do not envy college football coaches in this current era of athletics. It seems like a daunting task to personally re-recruit all their players every year and make sure everyone, including family members who are also guiding decisions, are happy. What a challenge as the result of complete and unrestricted college free agency, better known as the transfer portal. At least in many professional supports they have a salary cap that helps regulate movement. I will continue to harp, who is validating that the academics standing of each student-athlete who enters the portal? It seems like a major effort to ensure a player’s eligibility to enroll at an institute of higher learning that no one is discussing. I remember how KU basketball recruits’ eligibility from high school were delayed seemingly endlessly waiting on the proper documentation. With over 3,500 student-athletes shuffling schools annually, what is the NCAA’s process?