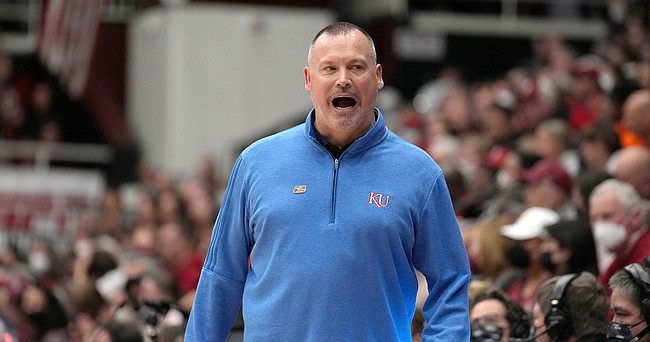 Kansas head coach Brandon Schneider yells to his bench during the first half of a second-round game against Stanford in the NCAA tournament on March 20, 2022, in Stanford, Calif.

Kansas women's basketball coach Brandon Schneider said Wednesday that guard Aniya Thomas' decision to transfer was made with a potential career in coaching in mind.

Thomas, who was a senior last season, entered the transfer portal on March 29 and will use the fifth year of eligibility granted to her by the NCAA at the start of the COVID-19 pandemic to play one more year.

She played a large role in the Jayhawks' turnaround from a Big 12 also-ran to the top half of the conference, started for much of her four years and averaged 8.6 points and 2.7 rebounds per game.

"I've been doing this 27 years and I don't know if there's a player that I'm closer to than Aniya Thomas," Schneider said. "I think for someone who wants to be a coach, her taking advantage of the opportunity to use a COVID year and make more connections, add another program to her list and potential networking was a really smart thing to do."

Schneider said Thomas, who has been making recruiting visits, wants to find a school that will allow her to play a lot of minutes and potentially let her transition into a graduate assistant opportunity once next season ends.

He also said there's a possibility he would welcome her back to Kansas at that point to serve as his graduate assistant.

"I think that was a very mature lens to look (through) at a COVID year," Schneider said. "But (she's) an absolute crucial brick in the foundation of what this program has been able to do."

Thomas' scholarship will be filled by Wyvette Mayberry, who committed to Kansas earlier this week after two seasons at Tulsa.

Mayberry, who will be a junior, said Tuesday that Schneider told her she was the ideal player for what he needed — a backup point guard and reliable scorer who can help lessen the workload for starter Zakiyah Franklin.

Bella Swedlund, a 5-foot-8 combo guard from Winner, South Dakota, and Zsofia Telegdy, a 6-foot-3 forward from Budapest, Hungary, who has spent the last two seasons playing in Sharpsburg, Georgia, will join Mayberry as the team's three newcomers next season.

Schneider said he was most excited about Mayberry's assist-to-turnover ratio, which, at 1.52 last season, ranked in the top 10 percent of all players in Division I.

"She was the kind of player that we were looking for, without question," Schneider said. "I think when you just evaluate our needs — you lose Julie (Brosseau), who could slide over and help us, and quite honestly, we're playing (Franklin) too many minutes. She needs to play a lot of minutes, but it's going to be better if we can lighten the load on her a little bit."

Schneider said the national championship won by the men's basketball team earlier this month is "not only great for athletics, it's great for the university."

He also thinks it can serve as encouragement for his players, who helped Kansas return to the NCAA Tournament for the first time in nine years, and even for himself.

"I think when you're in a situation where, for me, I'm so grateful that I get to be a part of a department where I have so many colleagues that have set the bar so high and achieved so much, it's motivating and it's inspiring," Schneider said. "You want to live up to those kinds of expectations, regardless of what sport or program it is."

Texas A & M on schedule

Kansas has reached an agreement on a home-and-home series with Texas A & M, with the first game to be played next season at Allen Fieldhouse and the game the following season in College Station, Texas. The Jayhawks are also set to play at Nebraska in what Schneider said will be a significantly tougher nonconference schedule than that of recent years. ... The Jayhawks will finish their offseason workouts next week before the semester ends, and they'll have the better part of two months off before they reconvene in early July. ... Schneider anticipates his entire coaching staff to return next season. That has not happened in his previous seven seasons at Kansas. "The vibe and the synergy in our staff right now is really solid," he said.

Good luck to Aniya!! You helped build the foundation!