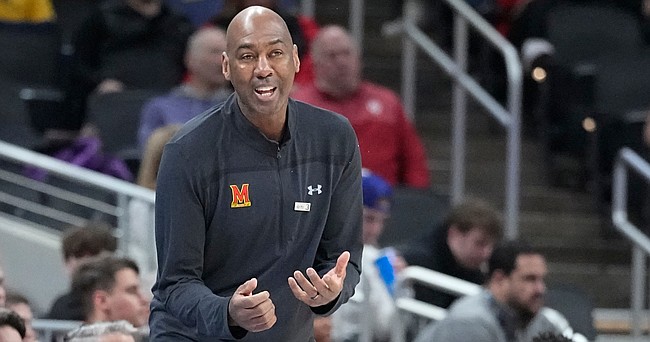 Payne said in a release that Manning “encompasses all the experiences that a college basketball player goes through.’’ The first-time head coach called Manning a family member and added he's “thrilled” to bring aboard a former player and coach to help establish the culture.

Manning’s highly decorated basketball career includes leading Kansas to the 1988 NCAA championship as a two-time All-American before becoming the No. 1 overall selection in that year’s NBA Draft.

He is KU's all-time leading scorer and rebounder and, despite injuries impacting his professional career, went on to score 12,367 points in 15 NBA seasons with seven teams while earning All-Star honors in 1993 and 1994 along with the Sixth Man of the Year award in 1998. Manning also played on the 1988 U.S. Olympic squad.

Manning’s hiring is the second this week by Payne, who on Monday added former Duke assistant Nolan Smith to his staff.

Manning was in New Orleans for the 2021-22 Kansas basketball program's run to the national championship, sitting with several other KU greats behind the Jayhawks' bench during their 72-69 victory over North Carolina in the title game on April 4.

Kansas should be able to win in a bidding war with Louisville. I often dream, so to speak, of Danny coming back to Kansas. We could really, really use him so as to win more national championships than we would otherwise without him.

Good for Danny, but too bad it wasn't KU.

I heard that hiring Nolan Smith away from Duke was seen as very concerning because he’s a great recruiter. Haven’t heard if any of the recruits have flipped because of the change.

Seems like Louisville is putting a blue blood staff together. Would love to have Manning back but Self is so loyal to his assistants I don't think he'll fire a current one to go get an older one.

Great for Danny. Personally, I don't want Danny Manning as a coach at KU. He is not the guy for the head job after Self. He is fine as a recruiter and a big man coach, but that's it.

this sounds to me like Danny Manning doing a favor for a friend.

Danny still could be a head coach at most schools and an assistant any school in the country.

He isn't worried about his coaching legacy and he likely sees the assistant coach job as at least a bit of a break from being the HC at Wake and the interim at Maryland.

I still believe that he has what it takes to be a championship head coach. And other than his age and Bill Self's longevity I still don't see much reason he couldn't follow Bill Self at KU, though admittedly I didn't watch any of his teams at Wake or Maryland so I wouldn't know if there's some fatal flaw in his coaching or his style of play that would be a problem.

My take would be that Manning would be a "safe" choice to follow Bill Self, but I don't necessarily want KU to take the safe route just because it's safe.

I think that when the time comes to replace Bill Self you have a few things to consider: first, the AD always has a short list of candidates they would probe for interest if the job were about to become available; second, you have to ask Coach Self who he would recommend for consideration for the job; third, you have a search committee (it doesn't have to be a big public spectacle, they should work fast and be secretive) and they conduct interviews of the best available applicants.

After that, if the choice does not become obvious (and it could become obvious if there is a groundswell of support for Danny Manning or someone else), then you weigh the "safe" choices and the legacy hires against the nationwide field considering the pros and cons of bringing in a KU legend or a local favorite or one of Bill Self's guys (friend, former player, former assistant, etc) and you make an informed choice based on current needs and future goals of the program.