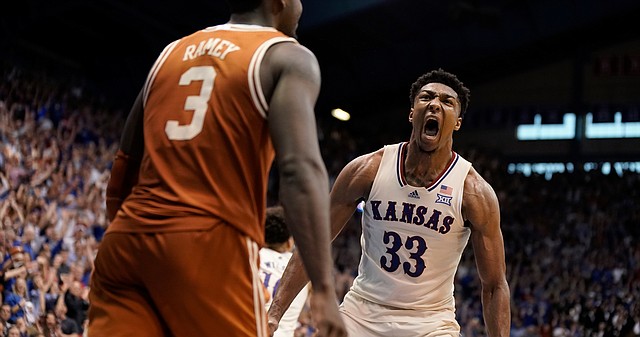 Fresh off of winning a national title in New Orleans, Kansas forward David McCormack was named the Big 12 Scholar-Athlete of the Year for men’s basketball on Tuesday.

The honor adds to a strong list of accolades handed out to McCormack in recent weeks, including a spot on the NCAA Tournament all-tournament team.

As was the plan coming in, the senior from Norfolk, Virginia, graduated from KU in three years with a degree in communications studies. He carries a 3.50 grade-point average and is currently studying digital content strategy in graduate school.

On the court, he averaged 10.6 points and seven rebounds for the Jayhawks during his senior season while posting 11 double-doubles, including a 15-points, 10-rebound effort against North Carolina in the national title game.

During his KU career, McCormack was a three-time Academic All-Big 12 first team honoree.

He becomes the second Kansas player to win the Big 12 Men’s Basketball Scholar-Athlete of the Year honor since its inception during the 2012-13 season. Former KU great Perry Ellis was a two-time recipient of the award in 2015 and 2016.

Joining McCormack in representing KU this year is senior swimmer Kate Steward, who was named the 2022 Big 12 Women’s Swimming & Diving Scholar Athlete of the Year this week.

The awards are handed out after a vote of the Big 12’s head coaches in each sport.