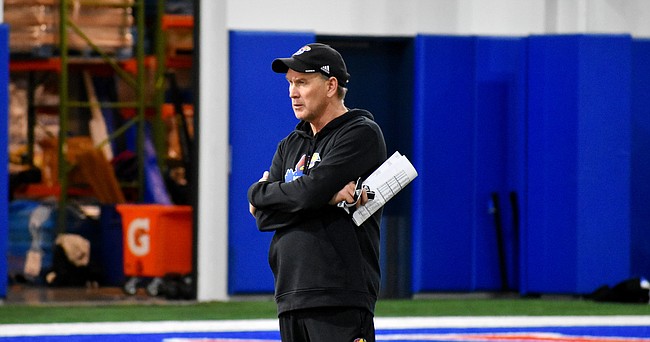 Kansas football coach Lance Leipold hadn't taken more than a half-dozen steps beyond the front gate of New Orleans' House of Blues on Monday evening before he was approached in the courtyard by a fan who wanted to introduce himself.

Leipold greeted the man and his two friends for a few brief minutes, then mingled with the crowd of hundreds who had descended on the music venue as part of the Jayhawks' pep rally. Amid handshakes and hellos, he tried to drum up optimism and support for his team among a fanbase that included many donors — past, present and prospective.

Building support for a program that has not won more than three games in a season since 2009 may not be easy, but that Leipold was recognized immediately in his red quarter-zip Kansas sweatshirt among a sea of people also wearing them shows they're interested in what he's trying to accomplish.

And he hopes that between that support and the lessons provided by the men's basketball team during its run to the NCAA title, he can inspire a new degree of belief in the football program.

"The nice thing about this is a lot of our fans and donors and things like that — I've had more time during this to really have conversations and talk and get to know them and them get to know me," Leipold said. "And the thing that's really been rewarding is they saw the progress our team made late in the season and they see the progression that we're making in a lot of different ways. I can sense an excitement. They can tell that there's definitely a change in KU football."

Leipold also traveled to Chicago two weeks ago when the men's basketball team played in the Midwest Region final and spoke to Kansas fans in the concourse.

He said some of the discussions he's had have been enlightening, particularly because some supporters have acknowledged that they don't follow the football program anymore because of its lack of success.

"We've had those conversations," he said. "There's times that, 'Yeah, I've kind of followed but I fell away,' and doing some things, I think that kind of helps. I think, again, showing support for this program and everything shows a united front, and I think we're going to get them back involved. They see it. But again, it's not their fault that they fell away. We've got to give them the stability and the consistency day in and day out so they want to get behind us and give them reason to support us."

The success of Kansas' other teams can also pay off for Leipold in recruiting, which matters just as much as financial support.

He has tried to use the brand awareness of the men's basketball team to appeal to prospective players, and that the women's basketball team made its first NCAA Tournament appearance in nine years last month can let them know they'd be attending a school that's committed to athletic excellence.

It has worked for him before. During the 2014 season, when he was the football coach at Wisconsin-Whitewater, the school became the first in any of the NCAA's three divisions to win national championships in football, men's basketball and baseball. It also won a women's gymnastics title that year, too.

Not long after he won, he had conversations with UW-Whitewater's tennis and women's soccer coaches about what they could do to elevate their teams to that standard.

"It can be contagious," Leipold said. "It motivates the athletes and our program and other programs to try to reach the heights that the basketball program has done here."

Leipold's task is also to turn that attention inward. Although Kansas' men's basketball team certainly hasn't lacked for success like the football team has, it was able to integrate several players who transferred to the university to fill specific roles — among them running back Ky Thomas, who is from Topeka and spent his first two seasons at Minnesota before enrolling at Kansas in January.

Thomas, who grew up playing basketball against Christian Braun, a junior guard on the men's basketball team, said the parallels between the programs have been discussed already this week.

And since those comparisons have been made, Thomas found it relevant to draw one more.

"The last time we won a national championship game (in 2008), we went to a bowl game," Thomas said. "That's definitely the goal. We've seen their success and the love that they got and they support that they were getting during their whole journey in March, so that's something that we're definitely looking forward to getting and working toward."

Last time we won a National Championship, we won a BCS Football Game (to rephrase slightly). Only one of two universities to have that success in a single year.

Good distinction Jeff, though it probably works better as stated for their aspirations.

I think some of the players started to make the mental change last year. No one gets to their level without effort, just as the basketball team was putting forth effort in the first half. Winning teams/players/coaches find the extra effort for difference making plays. The difference between being close and making a play. Between gaining yardage and gaining a first down. The repeated comments from the BB throughout March in particular was, attention to all the little details matter. Little details by everyone on the team can be the difference between good plays and winning plays.