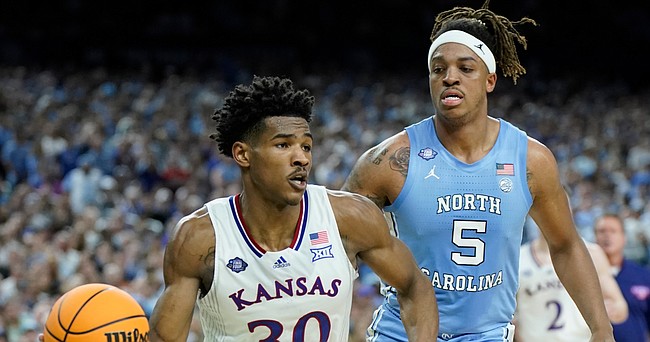 New Orleans — Kansas guard Ochai Agbaji was named the most outstanding player of the NCAA Tournament on Monday following the Jayhawks' 72-69 victory over North Carolina in the national championship game.

Agbaji, a senior from Kansas City, Missouri, earned the honor after he had 12 points in 37 minutes as Kansas claimed its sixth national championship and first since 2008.

A consensus first-team All-American and the unanimous Big 12 Player of the Year this season, Agbaji averaged 17.8 points and 4.7 rebounds while shooting 30-for-65 (46.1%) during the six-game NCAA Tournament run.

The only other players to win the award who played for the Jayhawks are Clyde Lovellette, B.H. Born, Wilt Chamberlain, Danny Manning and Mario Chalmers. Born, who won it in 1953, and Chamberlain, the winner in 1957, earned the honor despite not winning the national championship. Lovellette (1952), Manning (1988) and Chalmers (2008) did.

Agbaji, the Big 12's leading scorer during the regular season at 19.8 points per game, struggled to score during the opening rounds of the NCAA Tournament. He had 11 points in the first-round romp over Texas Southern, 15 points in a narrow win over Creighton in the second round and scored a season-low five points in the Sweet 16 win over Providence.

But he helped carry the Jayhawks to an Elite Eight win over Miami, when he scored a team-high 18 points on 8-of-12 shooting, and then set a Final Four record by shooting 85.7% (6-for-7) from 3-point range in the 81-65 victory over Villanova in which he finished with 21 points.

"He's the most accomplished player that we have had at our university since Danny (Manning)," coach Bill Self said. "To think that four years, win the national championship, win the league, win the Big 12 tournament, win the NCAA Tournament, to be most outstanding player — we may have had some guys that had comparable years, but never had anybody cap it off like what he has other than D."

As he has all season with a variety of honors, Agbaji downplayed the significance of the award after the game.

"I don't really care because we won the national championship," Agbaji said. "If I really had a most outstanding player throughout the entire Final Four, it would be David."

Agbaji, who has a year of eligibility remaining because the NCAA granted an extra season to players at the start of the COVID-19 pandemic, has made it clear he intends to leave Kansas to begin a professional career. He is expected to be chosen in the first round of the NBA Draft, which will be held June 23.

Congrats Ochai, and much respect for acknowledging David- he was a beast last night and just as deserving (or more so) of the award! Remy was huge for us throughout the tourney and is my tourney MVP. This was obviously a team effort and everyone did their part. So proud of these guys! Rock Chalk

Someone had to win the award. Och is the best player with the highest ceiling on the team, but it was truly a team effort all 6 games. Hard to choose, but they just went with the best player on the winning team, not necessarily who made the most impact. Remy and Dmac have a good case for truly being the MVP. But, as Och said, who cares, they won a Naty!

Congratulations Ochai!! So well deserved, such an amazingly talented & humble Jayhawk!! Reminds me of Frank Mason, came in as an unheralded kid, worked his butt off for four years & becomes a lottery pick while picking up a truckload of awards!! Rock Chalk, Ochai Agbaji, your jersey is going to be hanging up in Allen pretty soon!!

I understand the award as it was just covering the two games of the final four. I also understood why Remy was the MOP of the first 4 games in the tourney. What an amazing collective effort. With this year's discussion being non-stop all-thinfs Coack K, it was so great to see Self get his second natty. Self is definitely one of the best coaches in college men's basketball history.

So glad that Kansas is keeping the tradition alive. And thrilled, as is now so often mentioned in national media, that Kansas has won more games than any other program. Not only is it something that all fans can be proud of when they hear the national media call it out, it is something that will be helpful in recruiting along with the recent natty.

I really thought DMac would be MOP, but I thought that the award was just for the two games not for all 6.

The title game player of the game for Kansas could have gone to Remy, DMac, or Braun as well.

Och had an off night and all he did was go 4 of 9 from the field, for 12 points, 3 rebounds and 37 minutes of all out effort and great defense.

Jalen Wilson was ice cold and got 15 points 4 boards and kept Manek in check all night.

In fact he struggled to make a bucket all tourney and averaged 12 and 10 on effort.

Ochai is a great player, but he was rather ordinary last night. The MOP award should have gone to David McCormack.

MOP for the entire tournament? Ok OA showed in every game. For the Final Four, DMac would have gotten my vote.

KU owes a huge debt of gratitude to David McCormack. He won the battles and the win for us. Way to go, Big Fella!

watching the post game press conference I was surprised that I felt so much emotion for DMac. I'm very happy for him and very proud of him. He has taken a ton of criticism, but he gave his all to KU basketball for 4 years and good for him to get the final four net.

In the postgame he was asked about the late offense putback he scored against Bacot and Manek and his answer sounded so much like coach: https://youtu.be/fix5hEGFhdU?t=179

I don't know what the future holds for him in his playing career, but he has a bright future regardless.

MVP for the season was, of course, Ochai. MVP for last night was probably DMac. And the MVP for the tourney was probably Remy. He wasn’t afraid to take the big shot and had several last night that were absolutely HUGE, along with that incredible block of Love’s layup late in the game. He was the missing piece for this team, the one that got us over the top. But what a phenomenal team win. Truly magical and unbelievable.

Jonathan - I completely agree on the press conference. It was so cool to see all 7 interact, but maybe as much as anything was to see the leadership of David and Och.

I would suggest to you that part of the reason for Jalen being off during the tourney is because everyone started sagging off him. His 3 is in the 20’s. He needs to raise it 10% to force others to respect his outside shot. That will reopen the driving lanes where he is so deadly. That’s essentially the difference with CB. His 3 is high 30’s which means they can’t sag and he can drive more freely.

Dirk, you are exactly correct to point to Jalen's shooting. I think it's a confidence issue with him more than an issue of mechanics. He doesn't have confidence in his jumper and he forces tough shots off the drive. He will play with much more confidence next season and he will force teams to run him off the 3pt line and then he will make them pay by finishing in the paint.

I really thought that Dajuan did a great job for most of the tourney at taken the wide open 3 with confidence. Carolina didn't sag off of him the way Providence, Miami, and Nova did. Not after he knocked in 3 of them against Nova. He doesn't need to be shooting contested 3s. But if he is able to pick and choose his way into 40% 3pt shooting on uncontested 3s then he can lead KU right back to the final four again next year, especially if Jalen makes the type of jump I think he's capable of.

DMac should have been MVP without him we lose.

At Best Agbaji should have come in 3rd place in the Tournament Vote especially since it was over all 6 games. I really think it is an injustice for either DMack or Remy not to have received this award or possibly both of them. If you go back to the 2nd Baylor game a span of 13 games Agbaji was at best average as he was in the total NCAA tournament. How he received this award is beyond me. But he is the All American so I guess he gets the award by default. As a team I am very proud what the accomplished! Rock Chalk. You all will be remembered forever!