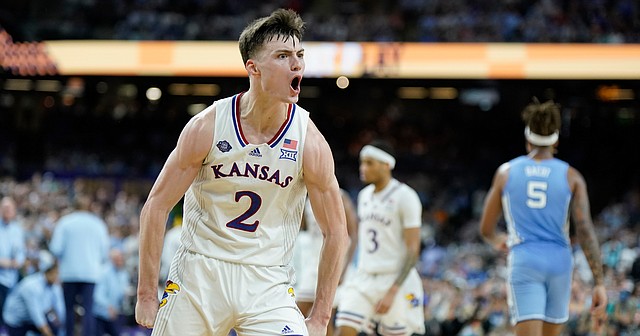 Kansas guard Christian Braun (2) goes berserk after getting a breakaway bucket against North Carolina during the second half of the NCAA National Championship game on Monday, April 4, 2022 at Caesars Superdome in New Orleans.

Gates to the stadium will open at 3 p.m. and fans will be encouraged to sit on the west side of the stadium.

Parking lots around the stadium will open at 2 p.m. and fans will be able to park and enter free of charge.

A shuttle service, which will run from the parking garage on Vermont Street and the Riverfront Plaza also will be available beginning at 2:30 p.m. 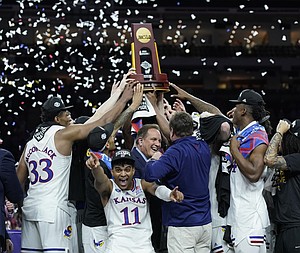 The celebration figures to be short and sweet, with head coach Bill Self and KU players addressing the crowd while showing off the team’s shiny new hardware. Both the 1988 national championship squad and the team that won it all in 2008 hosted similar welcome home events.

This year’s was made possible by the Jayhawks’ 72-69, comeback victory over North Carolina in Monday night’s national championship game at Caesars Superdome.

KU trailed by 16 in the first half and 15 at halftime but outscored the Tar Heels 47-29 in the second half to take the title. Both deficits marked the largest ever overcome in NCAA Tournament championship game history.

A championship parade for the 2022 champs is expected sometime this coming weekend but details have not yet been announced.