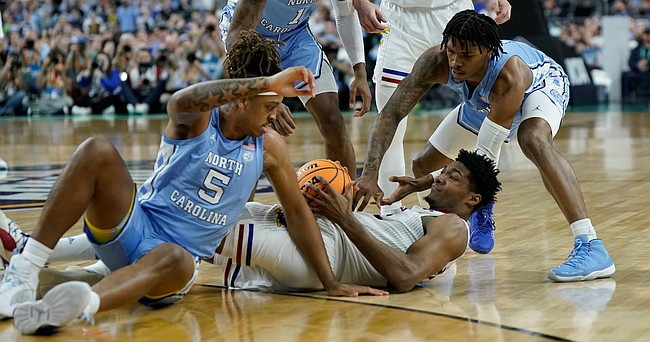 Kansas forward David McCormack (33) wrestles on the floor for a ball with North Carolina forward Armando Bacot (5) and North Carolina guard Caleb Love (2) during the first half of the NCAA National Championship game on Monday, April 4, 2022 at Caesars Superdome in New Orleans.

New Orleans — No matter how much pain North Carolina's Armando Bacot was feeling, it doesn't compare to what he inflicted upon Kansas in the first half on Monday night.

Bacot, the Tar Heels' dominant 6-foot-10 center, battled through a sprained ankle to finish with 15 points and 15 rebounds — and had a double-double in the first half — even though the Jayhawks won 72-69 in the national championship game.

His presence was key to the Tar Heels establishing dominance in the paint on both ends and taking a 40-25 halftime advantage. One of the best rebounding teams in Division I, North Carolina had the 27-18 edge on the boards and an 18-2 advantage in second-chance points in the first 20 minutes.

It wasn't able to sustain that presence, however, as Kansas recovered to tie the score at 50 — and then increase its lead to as many as six points — as it won its sixth national championship.

Kansas, which entered the game shooting 63.8% at the rim, went just 4-for-14 on close shot attempts in the first half. Jalen Wilson had a layup rim out with 4:48 to play before halftime; Christian Braun had an off-balance layup blocked by Brady Manek nearly two minutes later.

North Carolina's interior domination happened even though Bacot was clearly hobbled. He injured his right ankle late in the Final Four victory over Duke when he stepped on teammate Leaky Black's right foot while trying to block a shot by Duke's Paolo Banchero.

Coach Hubert Davis joked after the game that Bacot would play in the game "even if he just stands there," and Bacot said Sunday that "my right leg would have to be cut off for me not to play."

He was clearly limping when the Tar Heels took the court for warmups — he had difficulty climbing the six stairs up to the elevated court — but was still too strong for Kansas' David McCormack to battle routinely and too big for Mitch Lightfoot, McCormack's backup.

"The last 24 hours, probably 15 of them it was me just trying to get my ankle better," Bacot said. "(The medical staff) did a great job preparing me for this moment. Right before the game, I really couldn't even jump. And then that's why I kind of went back. We just kept trying to take a crack at it. They didn't give up. Luckily, I was able to play 38 minutes."

Bacot wasn't alone in gobbling up rebounds for North Carolina. Guard RJ Davis had six of his season-high 12 rebounds in the first half, and Manek and reserve forward Puff Johnson each had four.

That gravity inside opened things on the perimeter for Manek, a 6-foot-9 transfer from Oklahoma who is an adept 3-point shooter. Although he finished 3-for-6 from 3-point range — and 3-for-5 in the first half — he hit a pair on consecutive possessions that put North Carolina up 28-22 and forced Kansas to call a timeout.

Only when North Carolina started missing shots in the second half, fueling Kansas' transition game and its comeback, did its interior dominance begin eroding.

And Bacot, who appeared to be hurting significantly when he got tangled with McCormack with 18:15 left to play, had to bow out for good with 38.5 seconds remaining once he tried to plant on his right foot while driving to the basket.

He tried to get back on defense by hopping on his left leg, but once five-on-five play was established, officials whistled the play dead to allow him to be helped off the court.

"I thought I made a good move," he said. "I thought I really got the angle I wanted. I thought it would have been an easy basket. And then I just rolled my ankle as I was going up, and then ... I couldn't put any weight down on my right leg. And right then and there, I probably knew I was done at that point."

So, too, was North Carolina.

You absolutely have to salute Bacot and the whole UNC team for literally leaving everything on the floor to the point of throwing up on it. They played to the absolute maximum through injury and pain and have to say I felt for them. KU needed every last bit of effort plus the alignment of stars to win this game. Coach Davis has something special there.