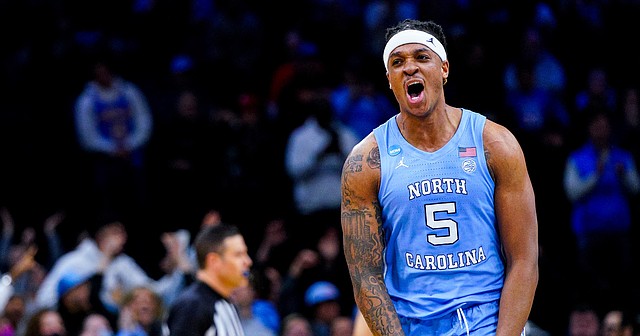 North Carolina's Armando Bacot reacts during the second half of a game against UCLA in the Sweet 16 on March 25, 2022, in Philadelphia.

New Orleans — North Carolina junior center Armando Bacot said Sunday that the experience he had playing for Kansas coach Bill Self during the FIBA Americas U18 Championship in 2018 made him want to play for the Jayhawks.

Bacot had already committed to play for the Tar Heels and coach Roy Williams, he said, when he was chosen to represent the United States during the week-long tournament, which was held in St. Catharine's, Ontario, Canada.

He averaged 7.8 points and five rebounds in 12.2 minutes as the United States went 6-0, won each game by an average of 49.3 points and claimed the gold medal. It was not only Bacot's first international experience; it was also the first time Self was selected to coach as USA basketball team.

"He was an intense guy," Bacot said. "He was on us, and it was a lot of fun playing for him. When you get a coach like that who's fired up at all times — I mean, there was a game where we were up like 100 points and he was still yelling at us and getting on us, and I was like, 'Dang, this is an intense guy.' I was already committed at that point, I think, but I was like, 'This is a guy I wouldn't mind playing for.'"

Self said he had a chance to talk to Bacot not long after they each arrived in Fort Worth, Texas, for the first two rounds of the NCAA Tournament last month. After he congratulated Bacot on his season, Bacot told him how much he has enjoyed playing for first-year coach Hubert Davis, who spent the last nine seasons as an assistant coach.

Bacot is averaging 16.3 points and 13.1 rebounds per game this season and was the runner-up in ACC Player of the Year balloting. He had 11 points and 21 rebounds in the 81-77 win over Duke on Saturday that advanced North Carolina to the national championship game against Kansas, but left that game with a right ankle injury that has left his availability for Monday's clash uncertain.

Some of the foundations for his dominance this season, Bacot said, were established during that time playing for Self in June 2018.

"That was my first look at how college basketball would really be because I was coached by three or four different high-level college basketball coaches and they kind of had a college system going on all throughout the year at practice, so that was a chance for me to get a head start," Bacot said. "I kind of learned what I would be getting myself into playing under Coach Williams just based upon how they were coaching us."