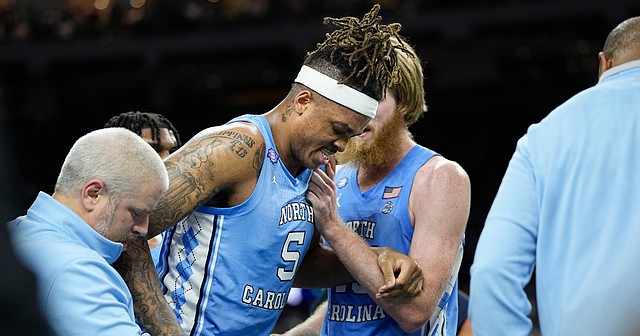 North Carolina forward Armando Bacot is helped off the court during the second half of a game against Duke in the Men's Final Four on April 2, 2022, in New Orleans.

New Orleans — North Carolina center Armando Bacot joked Sunday that doctors would have to "cut off my right leg" in order to prevent him from playing in the national championship game against Kansas on Monday.

Bacot injured his right ankle late in the Final Four victory against Duke on Saturday and sat for most of his press conference on Sunday with his right leg elevated on a folding chair. He left the game with 5:18 left when he stepped on teammate Leaky Black's foot, but he returned less than a minute later.

"I'm gonna go all out," Bacot said. "It's the last game of the season and it's the championship game. I'm gonna play my best and I'm gonna go out there and fight."

A 6-foot-10, 240-pound junior, Bacot has 30 double-doubles this season and was second to Wake Forest guard Alondes Williams in balloting for the ACC Player of the Year award.

Coach Hubert Davis said Sunday, before the Tar Heels held their practice at the Superdome, that the plan was for Bacot to be limited during that session. He said X-rays taken of his right ankle showed no structural damage "and he's ready to play tomorrow night."

Bacot, who is averaging 15.4 points and 16.8 rebounds in North Carolina's NCAA Tournament run, is the third starter to be injured with less than five minutes remaining in regulation or in overtime the game before it plays Kansas. The Jayhawks faced Creighton without center Ryan Kalkbrenner and Villanova without guard Justin Moore.

Black said Bacot's performance each night has set the tone for the team's run to the championship.