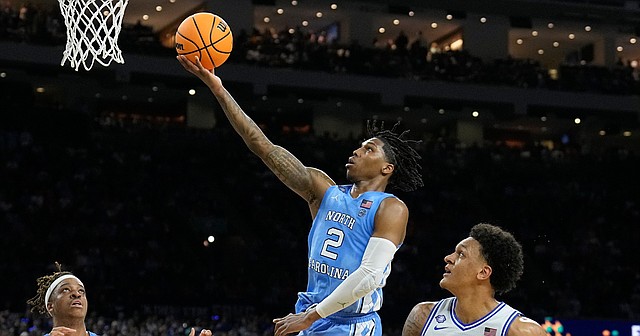 New Orleans — The Kansas men's basketball team is back in the national championship game.

After defeating Villanova 81-65 on Saturday, the Jayhawks will take on a fellow blueblood program in North Carolina. The Tar Heels, the No. 8 seed in the East Region, beat archrival Duke 81-77 in the other national semifinal at the Superdome.

Here's what you should know about North Carolina heading into the national championship game at the Superdome in New Orleans on Monday night.

Strengths: The Tar Heels are the sixth-best team on the boards in Division I with an average of 40.6 rebounds per game, and their 28.2 defensive rebounds per game rank second. They're also holding opponents to a 21.6 offensive rebounding percentage — the percentage of times they grab a rebound while on offense — and that also ranks second in Division I. Meanwhile, they only commit 14.5 fouls per game.

Weaknesses: North Carolina creates very few turnovers — an average of 9.7 a game with a turnover percentage of 13.7, according to BartTorvik.com, which ranks 353th of 358 teams in Division I. It's allowing teams to attempt 63.1 shots per game, which ranks 340th.

1. Limited rotation: North Carolina doesn't want to use its bench. It played eight players against Duke on Saturday, though Justin McKoy played only 52 seconds. It played only six players in the Elite Eight win over Saint Peter's, and it won that game by 20 points. But that approach will be challenged after Bacot injured his right ankle late in the win against Duke. Bacot left the game with 5:18 left when he stepped on Black's foot, but he returned less than a minute later. "He'll play," Hubert Davis said. "Even if he just stands there, he's going to play. We're going to trick Kansas. He'll just sit there in the middle of the lane."

2. Big Manek: Whereas former coach Roy Williams was married to the idea of playing with a traditional center and power forward, Davis is not. Manek, who transferred to North Carolina from Oklahoma prior to this season, is going to stretch the floor. The 6-foot-9, 230-pound graduate averaged 5.2 3-point attempts per game at Oklahoma and has ratcheted that up to 6.2 attempts per game this season. He's making 2.6 a game, including more than five four times, and 54.2% of his shots are from beyond the arc.

3. Riding the wave: North Carolina was on the tournament bubble for much of the second half of the season before it thumped Duke in coach Mike Krzyzewski's final home game to head into the ACC tournament on a five-game winning streak. Although it lost to Virginia Tech in the ACC semifinals, it earned a No. 8 seed, knocked off top seed Baylor in the second round, beat No. 4 seed UCLA in the Sweet 16 and ended Saint Peters' storybook run in the Elite Eight. Then it put a lid on the Krzyzewski era on Saturday.