‘This is it’: Kansas’ seniors staring down their final games with Jayhawks 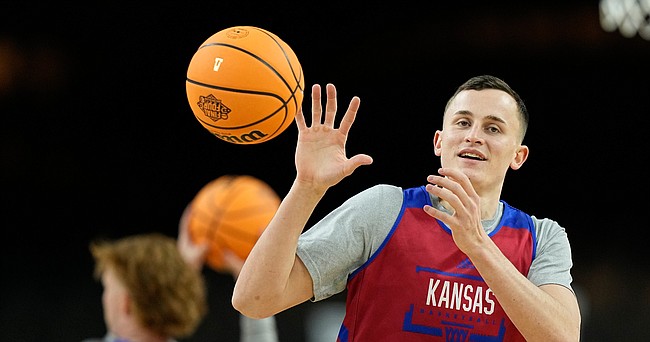 New Orleans — Kansas' Mitch Lightfoot and Chris Teahan were leaving Allen Fieldhouse on Tuesday when the emotion and significance of the moment finally caught up to them.

Lightfoot, a sixth-year senior forward, and Teahan, a fifth-year senior walk-on guard, had just finished their final practice in the building.

It remains uncertain whether Kansas will play one more game after it faces Villanova in the Final Four on Saturday night. What isn't certain is that for Lightfoot, Teahan, guards Ochai Agbaji, Remy Martin and Jalen Coleman-Lands and forward David McCormack, this weekend represents their final games with the Jayhawks.

Should Kansas reach the national title game and face Duke or North Carolina on Monday, Lightfoot would leave having set a school record. It would be his 17th appearance in an NCAA Tournament game, with Kansas greats such as Danny Manning, Nick Collison and Kirk Hinrich among the eight players who appeared in 16.

"If you're around long enough, you can do damn near anything," Lightfoot said, unaware that the milestone was within reach. "That's a lot of games. Damn near half a season in the NCAA Tournament. That's wild."

Lightfoot, whose first season at Kansas was 2016-17, was a junior when Agbaji and McCormack were freshmen in in 2018-19. Martin, in his fifth year in college, and Coleman-Lands, in his seventh, transferred to Kansas prior to this season.

Coach Bill Self said Friday that it hasn't yet set in that it's the end of the road for Jayhawks' oldest players.

"I told them this morning when we finished practice, I said, 'I know you guys can't wait to get rid of me, but why don't we do this one more time?'" Self said. "That would be my goal, is to have one more practice. ...

"But I'm going to miss those guys. But I hadn't even thought about playing without them yet. That's something that we'll postpone until whenever the end is here and hopefully it won't be for 72 or so more hours."

Agbaji has a season of eligibility remaining because of the waiver the NCAA granted at the start of the COVID-19 pandemic but has said he will begin a professional career this spring.

"I've had a lot of time to think about it, just my time here, all the people I've met, all the experiences I've had," Agbaji said. "But, no, it's great to be in this moment and to be ending my career like this."

McCormack, a starter the last two seasons and part-time starter over his first two, said it hasn't sunk in that he's staring down his final games at Kansas.

"I know it's going to hit hard after the season," McCormack said. "I've just been so focused on getting to Monday that nothing else has sunk in, honestly."

Self, in his 19th season at Kansas and his 29th as a head coach, said the players this season have "a unique closeness that we all feel toward each other." Being at the Final Four is a fitting end for the seniors.

"Sometimes the end outweighs the journey," Self said. "In this particular situation, the end will equal or surpass the journey."