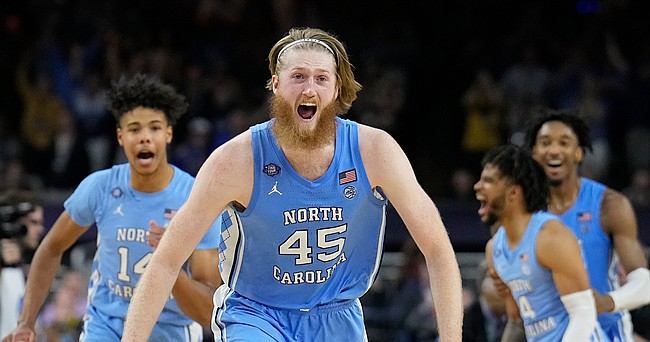 It was the 258th, most consequential and maybe, just maybe, the very best meeting between the teams, whose arenas are separated by a scant 11 miles.

The eighth-seeded Tar Heels (29-9), of all teams, pinned the 368th and final loss on the 75-year-old exactly four weeks after they ruined the going-away party in Krzyzewski's final home game at Cameron Indoor Stadium.

That loss hurt. Saturday's stopped Krzyzewski's last-gasp storybook run one win away from a title game and a chance at his sixth championship.

When it was over, after playing through the nip-and-tuck stretch run without a timeout, Krzyzewski walked calmly to halfcourt and shook the hand of North Carolina's rookie coach, Hubert Davis.

Instead of Krzyzewski going for his sixth title, on Monday, North Carolina will try to win its seventh. It will be Love, who led the Tar Heels with 28 points, and R.J. Davis, who scored 18, going against Kansas, which beat Villanova 81-65 earlier in the undercard.

"Dwelling on the two wins against Duke doesn't help us against Kansas," Hubert Davis said.

Maybe not, but what a game. It featured 18 lead changes and 12 ties.

It featured another breakout performance from Love, whose 28 points after an 0-for-4 start were one more than what he put up in the second half of a win last week against UCLA in the Sweet 16.

"It means everything to me," Love said of his key 3 with 25 seconds left.

At around the 2-minute mark, the teams traded three straight 3s. Wendell Moore Jr.'s 3-pointer with 1:19 left ended the flurry and gave Duke a 74-73 lead. It was the last lead of Krzyzewski's career.

R.J. Davis came back with two free throws, then after Duke's Mark Williams, in foul trouble all night, missed a pair from the line, North Carolina worked the ball around the perimeter.

Tar Heels guard Leaky Black set a pick — make that threw a block — on Trevor Keels to free up Love, who drained a 3 for a four-point lead and what felt like massive breathing room in this one.

Love made three more free throws down the stretch, and then it was over. Krzyzewski walked off the Superdome floor hand in hand with his wife, Mickie.

Hubert Davis was crying again, much as he did last weekend when North Carolina punched its ticket to its record 21st Final Four.

"I felt like over the last two or three years, North Carolina wasn't relevant," said Davis, who replaced Hall of Famer Roy Williams. "North Carolina should never be irrelevant. It should be front and center with the spotlight on them."

Freshman Paolo Banchero led the Blue Devils with 20 points and his classmate, Keels, had 19. Another freshman, A.J. Griffin, never really got untracked, finishing with only six points.

Chances are Griffin and Banchero will be following Krzyzewski out the door. They are the latest in his revolving door of "one-and-done" players, though neither they nor Zion Williamson in 2019 could lead Duke back to the promised land.