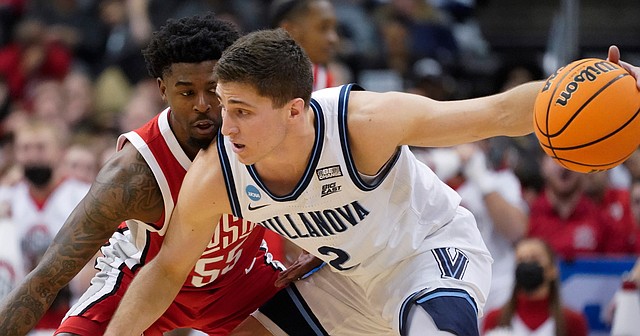 Villanova's Collin Gillespie tries to get past Ohio State's Jamari Wheeler during the first half of a second-round NCAA Tournament game in Pittsburgh on March 20, 2022.

New Orleans — Jay Wright can't recall the exact reason why he started asking his guards to post up against their defenders. What he knows is that once it started to work, he needed to stick with it.

Villanova's insistence upon having its players post up on opponents despite their size will provide a different wrinkle for Kansas to defend on Saturday when the teams meet in a Final Four game at the Superdome.

Wright, Villanova's coach, knows that because it's a unique approach, it's not going to work for every guard on his team. But it does for point guard Collin Gillespie, a 6-foot-3 fifth-year senior who will challenge the Jayhawks' Dajuan Harris Jr. and Remy Martin inside.

"Some guys aren't that good at it, and it's OK," Wright said. "But we'd still do drills to try to teach every one of them to be good at it."

Posting up is a staple of every team's offensive strategy, and one of the fundamentals of basketball for decades, to have a taller frontcourt player post up against a defender. That involves a player catching the ball, using his or her size to back an opponent down, turning toward the rim and taking a shot.

The Wildcats, however, like to do that with their guards — players who, by nature, are often the smallest on their team. It provides a strategic mismatch as their defenders typically aren't used to defending in the post and can prove to be a liability.

Villanova can take it even further, however, by clearing out the lane and sending their forwards beyond the arc. That allows Gillespie, for example, to kick the ball out to the perimeter in an attempt to create an open shot — or to merely dribble back out of the low post and reset.

"It is a unique way to play considering that you have maybe some of your smallest players be your best post people and maybe some of their biggest players can play so well away from the basket," Kansas coach Bill Self said.

Gillespie said the only time he played in the post prior to enrolling at Villanova was in pickup games against his father, Jim, and brother, James. He learned how to do so from former teammate Jalen Brunson, who could be physical with defenders inside.

"I think just doing it over and over again — practices, games — you get more comfortable with it the more you do it," said Gillespie, who leads Villanova with 15.6 points per game. "I've been put in that situation a lot now, and it's kind of become natural for me.

"Just learning it from the guys who came before me, having to defend it, has helped me on offense as well, because I know what it takes, kind of how to move in there and where I can make passes out of and where I could get my own shots."

Wright said he believes he got the idea to have his guards post up against defenders from Ryan Arcidiacono, who played for Villanova from 2012-16, because Arcidiacono was good at doing it.

Then Josh Hart learned how to do it, and Brunson "took it to a whole other level," Wright said, because he "was posting up bigger guys. Sometimes, if they would switch and put the five man on Jalen, he'd post him up."

The other advantage of Villanova's approach is that guards who are posting up can draw a foul from defenders unfamiliar with how to properly defend them. At 83 percent, the Wildcats are not only the best free throw shooting team in the country, they're on the verge of setting a Division I single-season record.

Martin said defending guards who post up is "more of a team thing" because if he's struggling, he knows forward David McCormack can help. Guard Christian Braun said Kansas has drilled defending the post-up this season, "but knowing we were going to play Villanova, I think we've had enough time to work on it."

"Coach isn't going to let a practice go by without doing that, so we've worked a lot on it and I think we're getting really good at it," Braun said. "Obviously, it's not going to be perfect. We don't do it every day, but we have worked on a lot of it with Remy in practice earlier in the season so we're familiar with it, and I think we've got enough guys who are mentally locked in and everybody on the same page where we can really defend that."

The Wildcats take an average of 25.9 3-pointers per game, and 46.1% of their total field goal attempts come from beyond the perimeter. But if they're not shooting from distance, they're attacking the rim. According to data from Hoop-Math.com, 65.3% of their 2-point shots are taken at the rim — layups, dunks or tip-ins — and that's the seventh-highest proportion among major-conference teams.

With an opponent that is as long and athletic as Kansas, Wright said he'll have to find creative ways to get his guards into the low post. Villanova wasn't able to do so reliably against Houston in the Elite Eight — but the Wildcats still managed to find a way to win.