3 keys for KU football vs. Baylor

Instrumental for the Kansas football offense through the first two nonconference games of the season, junior quarterback Jason Bean will need to keep showing off his speed in the Big 12 opener.

Bean and KU’s receivers added more downfield explosive plays to their repertoire in a Week 2 loss at Coastal Carolina, and while the Jayhawks have confidence in his arm, it’s Bean’s legs and feet that make him a problem for opponents.

“And watching him accelerate makes me more excited to see him carry it sometimes, too,” Leipold said.

“That’s some of his explosiveness and dynamic running that hopefully will continue to make him a dual threat,” Leipold said. “And working on the passing part will give us a chance to do that.”

Bean will have to keep carrying the offense until the Jayhawks get their ground game sorted out. Through two games, KU’s running backs have combined to average 2.4 yards per carry.

KU offensive coordinator Andy Kotelnicki said Bean provides “hidden yardage” when he scrambles to make something happen on a passing play or takes off to run for a first down.

“It just helps a ton,” Kotelnicki said, adding the Jayhawks need to get first downs “any way that we can.”

Just the threat of Bean’s running ability — he leads KU with 5.5 yards per carry and 77 rushing yards a game — is something defenses will have to prepare and scheme for, Kotelnicki pointed out.

The hope, Leipold said, is Bean continues to grow as a passer, and between the QB’s throwing and running — and defenses having to account for both — the run game for KU’s running backs begins to open up.

“And then everything starts to complement each other,” Leipold said, “and hopefully you’ve got yourself an offense that becomes more difficult to defend.”

2. Slow down the Bears’ run game

Baylor running backs Trestan Ebner and Abram Smith have been so good the first two weeks of the season that the Bears haven’t had to worry about doing much else besides handing the ball to one of the veterans. 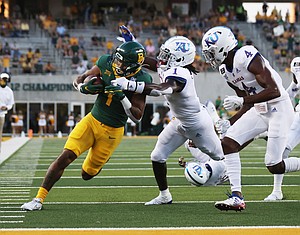 The Bears “run the heck out of the ball,” as Borland put it. They enter the conference opener after running the ball 88 times in their first two games and attempting only 50 passes.

“They’re good, physical, downhill type of runners that will put their foot in the ground and run through some tackles, as well as be able to make you miss,” Borland said of Ebner and Smith.

KU’s defense at least should be familiar with the Bears’ offense, Borland said, because the players see similar play calls and schemes while practicing against the KU offense. Borland said BU uses a lot of 12 personnel (one running back, two tight ends) packages, as well as an outside zone for its running game.

In their two wins — 29-20 at Texas State to open the season, and 66-7 versus Texas Southern in a home opener — the Bears haven’t had to reveal much of their offensive play book. So Borland said some of the coaching staff’s prep involved going back and looking at what first-year BU offensive coordinator Jeff Grimes did at his previous job, with BYU last year.

Ebner and Smith won’t be the only rushers KU defenders will have to keep their eyes on, either. Borland noted QB Gerry Bohannon becomes more of a running threat inside the red zone and near the goal line.

Plus, BU actually had three 100-yard rushers in its rout of Texas Southern, as Taye McWilliams went for 102 yards on just six carries.

In the first two games of the season, KU’s defense didn’t make many disruptive plays in the backfield. Entering the weekend, the Jayhawks are averaging only 3.0 tackles for loss as a team, which ranked 125th out of 130 FBS teams as of Friday.

No wonder Borland is asking his players to bring more physicality to Week 3. KU’s D.C. said one thing that hurt his group in the loss at Coastal a week ago was that the Chanticleers’ offense played with a down-and-distance advantage “almost the whole game.”

To set themselves up for more success defensively against Baylor, the Jayhawks will have to avoid those third-and-short situations.

“And some of that is you’ve got to win on first down,” Borland said. “You’ve got to make it second-and-long. Sometimes you need to get some tackles for loss in those situations. So we’ve got to create some things, make some things happen to where we can hit a guy for a loss.”

Kansas football OC Andy Kotelnicki discusses what KU will need to do to be successful against Baylor by KUsports.com

Keys: KU remains one of only a few teams that has not officially “turned the ball over” and will need to force numerous opportunistic turnovers to have a chance (although a blocked punt for a touchdown should be considered a turnover - just as devastating as a pick six). The offensive line must show up for the first time this season so KU can establish the running game and sustain drives. The defensive line must have a flat out dominating game; linebacking core is problematic and the defensive backs are young and not really burners (they have been beat repeatedly on deep routes and the opposing QBs have overthrown their wide open receivers). And finally Mr. Bean needs to stay health and be a dual threat. Football can be pretty simple, dominate the trenches and you have a chance. Rock Chalk. Prove that Mr. Benton Smith is a poor prognosticator.

Gotta get the running game going. We need to pound the ball for 200+ on the ground today. 250 through the air on top of that, with no turnovers and keeping Baylor at 50% or lower on 3rd down conversions, provided that they are 3rd and medium or long and get the ball in Bean's hands, we have a chance. What Andy said above about dominating on the line on both sides of the ball is necessary to achieve what needs done to win this game. On the pass plays, just take the open guy early. Nobody within 10 yards of the guy, throw, catch it. Even if it is just for 6 or 7 yards. Make the opponent have to cover those shorter routes, and if they do not, wear them down by just beating them a nickel at a time.

Is Bean actually using the quack cupping treatment? Is that what I see with the red circles on his shoulder? I would have thought staff would be smarter than to allow him to do that.