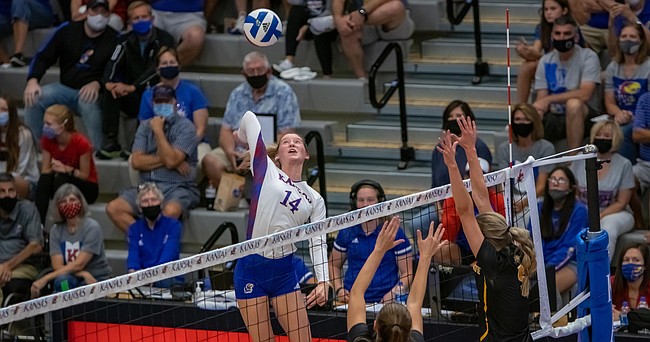 Already carrying the title of preseason freshman of the year, Kansas outside hitter/libero Caroline Bien was named the Big 12 Conference's Rookie of the Week on Tuesday after her stellar weekend at the Kansas Invitational.

Bien, a 6-foot freshman from nearby Saint Thomas Aquinas High, led the Jayhawks in kills and also showed off elite defensive skills all over the court in helping Kansas sweep three matches at its first home tournament of the 2021 season.

Bien finished with 38 kills in three matches and hit .372 for the week, while adding 34 digs.

Bien has started every match for Kansas (5-3) so far this season and is second on the team with 69 kills and 75 digs. She also has six total blocks and five aces.

KU will host the Jayhawk Classic, Thursday through Saturday at Horejsi Family Volleyball Arena. The Jayhawks will open the event against Kansas City at 6:30 p.m. Thursday.

Chris, I would disagree with your "totally bad" assessment. Mediocre would be a fair assessment, imo.