As Big 12 expands, AD Travis Goff vows to remain in pursuit of what's best for KU 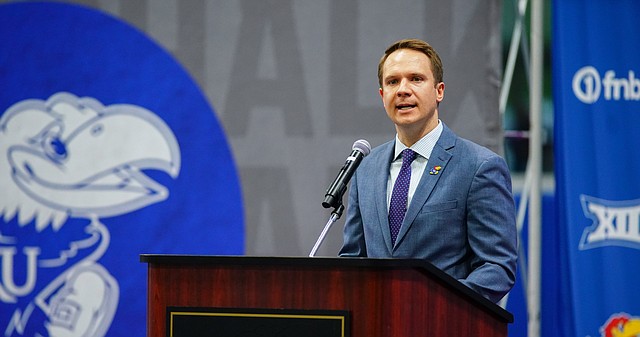 Asked by reporters prior to kickoff at Brooks Stadium whether the additions of BYU, Cincinnati, UCF and Houston meant KU would put a halt on KU exploring opportunities with another conference, Goff didn’t shoot down the notion and spoke of unknowns.

Goff said the KU athletic department always is in pursuit of what’s best for KU.

“It still puts us in the most positive strength and position we can be in in the league we’re in, most importantly, and for all the unknowns that are out there,” Goff said of where things stand.

Asked if the expansion closed the door on KU joining another conference in the future, Goff referred to how the landscape can change quickly — as the Big 12 found out when Texas and Oklahoma left for the SEC.

“Two months ago nobody knew what was happening, so for us it’s all about what we know. And what we know is we’ve got to get better in a variety of fashions,” Goff replied.

While Goff, a KU graduate, admitted he is biased when discussing the university, he said he thinks KU has as much potential as any Power Five athletic department in the country.

“That’s where we’re focused. It’s a great thing when you can have clarity and not be overly distracted by noise and you can zero in on what we have to do to improve ourselves,” Goff said. “So that’s really the focus.”

In the short term, Goff said, the KU football program can make small jumps forward that will help the entire athletic department.

With Texas and OU out of the picture moving forward, Goff said the Big 12 and KU are less secure financially — because of TV money ramifications — now than they were before the SEC invited those brand name programs in.

Goff said KU can strengthen its position financially by improving the football program under first-year head coach Lance Leipold. Goff said the Jayhawks need to be more competitive in football and with KU’s commitment to improving the program he’s confident ticket sales, donations and the like will improve.

Between KU’s academics, its blue blood men’s basketball program and a football program Goff thinks will improve under Leipold, he said those factors will “behoove us regardless of what transpires with any of those unknowns out there.”

Goff said Friday gave the Big 12 a future path for “this particular moment” and he hopes the league will be able to leverage that down the road with future media deals.

Bowlsby on Friday during a video conference said he wouldn’t suggest that the four new schools “would be the last move we will make.”

“I wouldn't say we're out looking to expand, but I wouldn't foreclose on the possibility either,” Bowlsby said.

Per the Big 12, when all four programs are officially in the conference on July 1, 2025, the league’s footprint will move from five states and 40.2 million people, to eight states with over 76.5 million total inhabitants. BYU is set to join the Big 12 for the 2023-24 season.

The KU football program actually has a little bit of history with some of the teams that will soon call the Big 12 home.

While the Jayhawks never have played against Central Florida, through the years they have gone a combined 5-1 against Houston, BYU and Cincinnati — though most of those games happened more than two decades ago.

One of the more noteworthy games in KU’s history came against BYU, the Jayhawks’ opponent in the 1992 Aloha Bowl.

The Jayhawks also beat Houston in a bowl game years ago. KU is 3-0 all-time versus the Cougars, with the most recent victory coming in 2005 at the Fort Worth Bowl, when head coach Mark Mangino’s team rolled, 42-13.

KU also played a home-and-home series with Houston in 1994 and 1995, winning both matchups.

Cincinnati and KU played twice in the 1990s, with each program winning on its home field. The first ever meeting between the teams happened in Lawrence in 1995, when Cincinnati was still an independent. KU won, 23-18. The rematch came two years later, with Cincinnati in Conference USA. The Bearcats won the rematch, 34-7.

A program first for CCU

Before Friday, no football team from the ACC, SEC, Big 12, Big Ten or Pac-12 ever had played at Coastal Carolina.

The Chanticleers, who first moved up to the FBS level in 2017, had only played road games against Power Five competition until the Jayhawks became the first team from one of the marquee leagues to visit Brooks Stadium.

CCU head coach Jamey Chadwell said earlier in the week having KU come and play his team was great for the community and fanbase, and having the matchup on ESPN2 for college football fans nationwide to see made it even better.

“I think it’s big. I think it shows what we’re trying to do here and the steps we’re taking. And it’s another step in us trying to build a program that’s relevant, not only in the Sun Belt, but nationally,” Chadwell said.

The Chanticleers don’t currently have any home dates lined up for future seasons with any Power Five programs.

“If we keep winning,” Chadwell said of the program’s rise over the past few seasons, “I don’t know if anybody’s going to (play at CCU), to be honest with you. But we’ll try our best.”

KU is currently the only Power Five team CCU has defeated. Dating back to the Chanticleers’ years in the FCS, the program is 0-7 all-time versus other Power Five teams, with road losses at South Carolina (twice), Clemson, Penn State, West Virginia, Georgia and Arkansas.