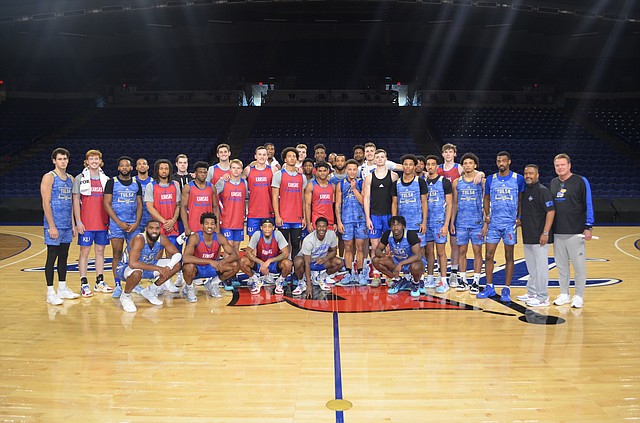 The Kansas and Tulsa men's basketball teams pose for a photo together at a closed-door scrimmage in Tulsa on Saturday, Oct. 30, 2021.

In the official record books, it will go down as a game that was never played.

No final score. No official stats. No details about game flow, high scorers, clutch moments or specific highlights will be made public.

But that all appears to be of little importance to Kansas basketball coach Bill Self, who said Saturday that his team “got a lot out of the scrimmage today,” following a closed-door matchup at Tulsa. 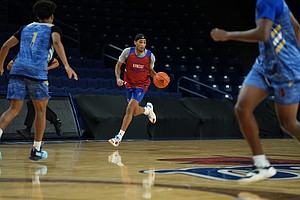 Per NCAA rules, no stats or scores are allowed to be released. What’s more, only those essential to conducting the scrimmage were allowed inside Tulsa’s Reynolds Center, where Self once coached as the leader of the Tulsa program from 1997-2000.

The experience was significant for the third-ranked Jayhawks, many of whom were playing together, against someone else, for the first time just 10 days ahead of their season opener against Michigan State at the Champions Classic in New York City.

“Tulsa is good and played hard,” Self said in a news release put out by Kansas Athletics. “I think it was good for our guys to go against different players, especially against a team that is so quick and has fast hands. They gave us a look we haven’t seen.”

The two teams played two 20-minute halves and then added an additional 10-minute period so more players could get extended minutes on the court. According to the release, the scrimmage concluded with both teams working on situational drills against each other in a live-action setting.

“They played a lot of zone,” Self said of the Golden Hurricane. “And it was good for us to go against their zone since we have not practiced against a zone so far. All in all, I felt it was a successful trip.”

"It was a really good experience for our guys to get out and play against someone else, and especially someone as good as Kansas," Haith said in a recap on Tulsa's official athletics website. "They'll be one of the best teams in the country. I thought our guys fought hard and competed. You're playing a team as athletic, as big and as strong as they are, you got to be able to adjust to the way the game is being played. I think that's a good learning experience for us.

Haith also said he was appreciative of Self and the Jayhawks being willing to travel for Saturday's scrimmage.

"It was good seeing him back here in Tulsa," Haith said of Self. "I think they're going to have a great year."

KU will return to action Wednesday against Emporia State at 7 p.m. inside Allen Fieldhouse in their lone exhibition game of the 2021 season.

Fans will be allowed in for that one, and the game is expected to be the first game in KU’s home venue played in front of a capacity crowd since March 4, 2020, when KU knocked off TCU in its home finale of the 2019-20 season to move to 27-3.

That game took place just eight days before the 2020 postseason was canceled because of the pandemic.

Wednesday’s game will be televised on Big 12 Now via ESPN+.