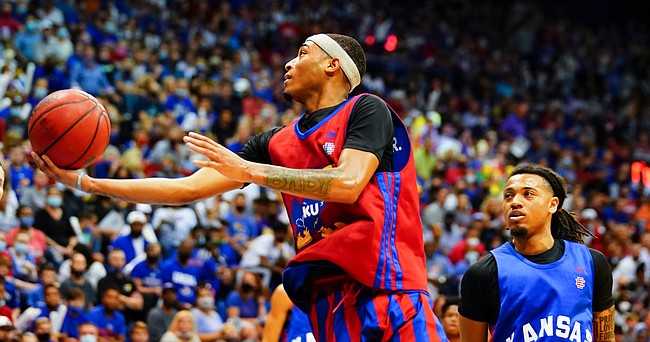 With Remy Martin and Dajuan Harris in line to handle most of the minutes at the point for the 2021-22 Kansas basketball team, the Jayhawks appear to be in better shape at the position than they were a year ago.

But don’t be surprised if you see the two point guards on the floor at the same time for chunks of games during the upcoming season.

“I like them playing together,” Kansas coach Bill Self said at last week’s Big 12 Media Day in Kansas City, Mo. “I really do. We’ve practiced that quite a bit.” 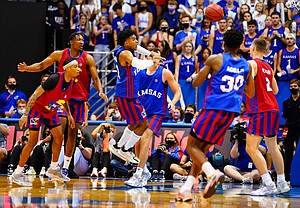 Kansas Jayhawks guard Remy Martin (11) fires a pass to a teammate during Late Night in the Phog, Friday, Oct. 1, 2021 at Allen Fieldhouse.

Figuring out how that works — who starts, how many minutes each gets and who sits to make it possible — remains a work in progress. But Self said playing the two small guards who both have great vision and the ability to push the pace could be a big lift for the Jayhawks this season.

Much has been made about what Martin can bring to the KU offense during the upcoming season.

But what about his defense?

Known as a high-volume scorer and shooter at Arizona State, the multi-time all-Pac-12 guard also has some defensive prowess, according to Self.

“If he is turned up, his defensive potential would be one to create havoc and make teams uncomfortable,” Self said in Kansas City. “If he doesn’t play up underneath guys or whatever, he's not big enough to create problems. So for him to create problems, I think he’s got to be turned up all the time.”

Those words described perfectly what Harris was able to do last year, in his first season of eligibility with the program after red-shirting Year 1.

Whether out there on his own or playing alongside senior defensive stalwart Marcus Garrett, Harris showed the ability to take over games with his pressure and tenacity on the defensive end of the floor.

KU senior Ochai Agbaji said he has noticed several things in Harris’ game that he knows he learned from Garrett.

“Him and Marcus were really close last year,” Agbaji said. “So obviously I feel like he has gotten stuff from Marcus about defending the ball. I know I have. And I know that's something that Dajuan has taken pride in, getting that knowledge from Marcus.”

Having Harris and Martin out there together this year, however, would do more than bring a different dimension to the Kansas defense. Self noted that Harris’ strengths as a true point guard could free up Martin to spend at least part of the time playing more like he did at Arizona State.

“When he and Juan play together, I think that gives Remy more of a chance to be a guy that would score more points,” Self said. “I think they could be really good together.”

Asked recently during his first media session with local reporters since arriving in Lawrence whether he would emphasize being more of a pass-first point guard at Kansas than he was at ASU, Martin said he was not planning to put any limitations on his game during the upcoming season.

The first chance for the Jayhawks to try out the Harris-Martin pairing comes this weekend, when the Jayhawks travel to Tulsa for a closed-door scrimmage with Frank Haith’s TU squad on Saturday.

After that, the focus will shift to the Jayhawks’ lone exhibition game against Emporia State on Nov. 3, followed by the regular season opener against Michigan State on Nov. 9 at the Champions Classic in New York.

Because I’m excited about returning to the idea of KU being a four-year institution of learning and not so much a five month way-station for people with different, but totally valid, dreams.

I really look forward to the day when we have a new coach and approach. This act is as worn as a bad toupee on a middling college basketball player. Although, he did wear his shorts the right direction. So that’s a plus.

You should check out the other sections of the paper devoted to education perhaps. If you are so concerned about KU as a four year institution there are about 25,000 undergrad students you could cheer on. Also, you could try to admonish the kids from JCCC and other area schools who transfer in with some college credits but finish their education at KU.

I wonder what the actual facts are about the length of time players are at KU for BBall? There have obviously been one or two players per year that leave early, but it seems like the majority are around for multiple years. There are some that decide to transfer out, but that has almost always been after proving they couldn’t cut it at KU, the highest level, or were just interested in playing at a lower level.

It’s only appropriate for a program led by a classy hall of fame coach.

It will be interesting to see how Yesufu fits in. Hopefully he can be turned up consistently as well.

So many options with this roster.

Joseph- since you're new to this comment discussion: Brett is actually the necessary antihero that is essential to any human dialectic. We need him on here to carry all the weight collectively of our small individual doubts, so that we can free ourselves to be unencumbered in our positivity. Don't go anywhere Brett

your comment is very good. Only problem is (and you may already know this) Joseph aka TRUEBLU has been a regular commenter on this site for 10 years and has 55 pages of comment history on his profile.

Now... you didn't say that Joseph was new to the site so perhaps you already knew that he's not new around here. Perhaps your comment while fantastically insightful was merely tongue in cheek and you were joking about Joseph being new. Either way... bravo.

LOL Well Joseph, aka TRUBLU, you got Dirk to applaud your comment so your rouse almost worked.

Great observation Ted. Most people have some irrational fear. Phobias. A lot of people just learn to smash the spider or whatever. Some people channel it into horror films and we get things like the 4 young people in the gieco commercial. Forget the run car. Let’s hide behind the chainsaws. Brett can have some good observations.

Ted - What do you think about butt-hurt stalkers?