The scare the underdog Kansas football team gave No. 3 Oklahoma Saturday wouldn’t have been possible without prolonged offensive drives and a solid running game.

So although the Sooners rallied for a 35-23 road victory at David Booth Kansas Memorial Stadium, true freshman running back Devin Neal felt encouraged by the Jayhawks’ showing.

“I’m just super-proud of the O-line, and the receivers blocked phenomenally on the edge,” Neal said during a postgame interview, when asked about his 100-yard rushing day.

Neal had a career-high 23 carries and scored a new personal best two touchdowns in the loss, as he reached 100 yards for the second time this season. 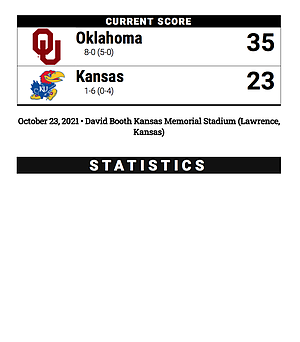 The 5-foot-11, 210-pound back from Lawrence, in fact, averaged 4.3 yards per carry. And the Jayhawks as a team averaged 4.0 yards per run. Quarterback Jason Bean ran for 59 yards on 14 attempts, as the other primary running threat.

“Just super proud of our effort,” Neal said, “and I thought we ran the ball extremely efficient. Just looking to keep doing that (in the weeks ahead).”

While KU’s defense has struggled this season, the unit entered the home matchup with Oklahoma having forced at least one fumble in each of the first six games.

That streak continued on Saturday, with linebacker Rich Miller knocking the ball out on OU’s opening series of the second half. The Jayhawks weren’t able to recover the ball, though.

KU’s run of forcing fumbles began in the opener versus South Dakota, with super-senior defensive end Kyron Johnson getting it started. In Week 2, senior D-end Malcolm Lee was the next to force a fumble.

Safeties Kenny Logan Jr. and O.J. Burroughs each had one forced fumble against Baylor. The next week, Logan forced another at Duke.

Atmosphere upgrade in second half

KU’s stadium didn’t look quite as empty in the second half as it did early on for the 11 a.m. kickoff, as students began filling the bleachers on the east side of the venue. 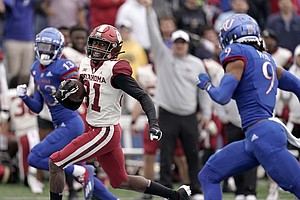 Plus, KU announced on its radio broadcast and via social media during the third quarter that the gates were open for any fans who wanted to come in and watch the remainder of the game.

KU’s announced attendance for the game was 26,321.

It broke Logan’s previous mark of 12, which he had pulled off twice. Logan finished with 10 solo tackles for the defense versus OU.

Linebacker Miller and cornerback Jeremy Webb were tied for second on the roster in tackles, with six apiece.

During the first series of the game, the power went out in the stadium — and campus wide. The video board on the south end of the stadium went black, and replay review wasn’t even available for the officiating crew.

Nevertheless, play resumed without the typical modern amenities after a brief stoppage.

The electricity remained out throughout the entirety of the Jayhawks’ opening drive before it was restored.

One of the top wide receiver prospects in the region, Park Hill South (Mo.) standout Mudia Reuben was in attendance for Saturday’s game.

Rated a three-star prospect by Rivals, and currently ranked as the No. 8 overall Missouri high school prospect in the Class of 2022, Reuben has more than a dozen FBS scholarship offers and is currently undecided.

Back in the summer, Reuben announced his top five, and KU made the cut, along with Kansas State, Stanford, Arkansas State and Vanderbilt.

Reuben, listed at 6-foot-3 and 190 pounds, has visited K-State a number of times this year, including one official visit.

What an amazing performance! Prior to the game I predicted, on this website, a final score of 62 to 3 in Oklahoma’s favor. I am so delighted that I was so wrong. They have much to be proud of and I wish them the best.

That was close to my prediction, which was 52-10. Then even as KU was playing well, I kept revising my prediction and expecting OU to dominate at some point. Although they did outscore us 35-13 in the 2nd half, there were only a few big plays that really decided it. A very impressive performance that finally gives us some real hope for the future.