Earlier in the week, head coach Lance Leipold called this year’s class a “special group” with “outstanding” leaders in it.

“While many (other players) may have chosen to leave, these young men were loyal to this football program and university. And they should be commended for that,” Leipold said during the most recent edition of his weekly radio show, “Hawk Talk.”

Leipold and numerous members of his staff who followed the head coach to KU from Buffalo didn’t take over the program until the beginning of May, and had to establish new schemes, a new culture and more. 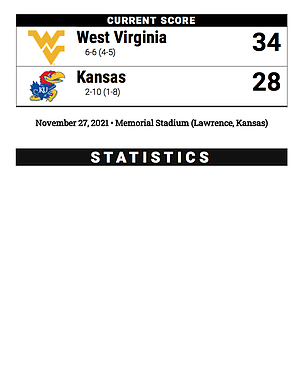 “Change is never easy,” Leipold said. “This group has been outstanding and never wavered in their commitment to be Jayhawks.”

While KU’s head coach emphasized that many of this year’s seniors and super-seniors have played important roles, Leipold said one who resonated with him was offensive lineman Chris Hughes, a starter in past seasons who is now a reserve.

Hughes has been “unbelievable” behind the scenes, Leipold said. He helps players out, stays positive and does much for the good of the program without ever being asked.

Recently, Hughes asked Leipold if he could address the team, and the head coach said the O-lineman’s message was how important it was for the players to not go through the motions as they finish out the season. Leipold called it “really special.”

Hughes started at left guard in the season finale, as a way for the staff to honor the veteran. On the second snap, Joey Gilbertson, another senior, came in to take over at left guard.

KU’s top receiver this season, Kwamie Lassiter II said earlier this week he was looking forward to the Senior Night experience, as well as playing at home versus WVU for his KU finale.

Here are the 15 seniors KU honored during a pregame ceremony:

The players were introduced one at a time, beginning 20-plus minutes prior to kickoff. Each ran out of the tunnel as his name was called, and was greeted by KU Chancellor Douglas Girod, as well as KU Athletic Director Travis Goff. Next, each player made his way onto the field to greet Leipold and pose for a photo. 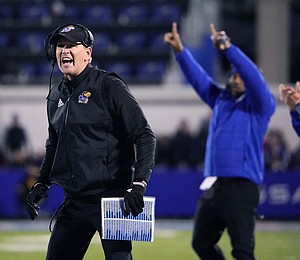 Lassiter was introduced last and received the loudest ovation from the home crowd.

KU’s former head coach, Les Miles, as well as his wife, Kathy, attended the ceremony to be there for their son, Ben.

The Jayhawks were without their No. 1 running back, Devin Neal, for the season finale. Neal, who got hurt during the second quarter of the Jayhawks’ three-point loss at TCU on Nov. 20, missed a game for the first time in his young college career.

Without their top rusher, the Jayhawks turned to redshirt freshman Amauri Pesek-Hickson, who got his first start of the season at running back.

Pesek-Hickson ran for 60 yards on 12 carries.

Walk-on tight end Jared Casey, who got his first career start for the Jayhawks in the finale, found his way to the end zone yet again.

Two weeks removed from his game-winning two-point conversion catch at Texas, Casey caught a Daniels TD pass for the second week in a row on Saturday night. He also made a game-tying TD reception in the fourth quarter at TCU.

For the Jayhawks, this week’s Thanksgiving day festivities included a morning practice on Thursday, same as any other game week.

After that, Leipold said there was a Thanksgiving meal at the team’s facilities. Also, any Jayhawks who had family within a short driving radius were able to go home for the day, too.

Some coaches had players over to their homes, as well.

Quarterback Jalon Daniels said on “Hawk Talk” earlier in the week that his mother was making a special trip to Lawrence for the holiday. Before she got into town, Daniels said, she ordered ham and turkey for him to go and pick up to make sure the kitchen was stocked and ready.

Congratulations to the seniors and super seniors for playing at KU, my alma mater. Class of 1963. I can see the improvement that has become evident. Your leadership was a positive force.

I’m really proud of the Seniors for staying loyal to the program, and it has been great to see the improvement of our team. Rock Chalk, Jayhawk!

Thank you seniors for being loyal to the football program and proudly representing the University. Great success at the next steps of your professional careers and be proud of your degree from a strong academic institution (class of 1982). Congratulations to Leipold and his staff for bring stability and leadership to the football program and a modicum of respect nationally. Now the rebuild process officially commences. Can Leipold retain the top players in the program now that they understand how he coaches and what is expected? Can Leipold recruit Big 12 level talent, including in Kansas where KSU dominates west of Topeka? Time will tell, but as with the five coaches who proceeded Leipold since Mangino, fans need to be patient and allow time for the coaching staff to recruit and develop players, i.e., they need to get “bigger, stronger, and faster” at every position. Rock Chalk!

So, Riley is leaving OU for USC. Hmmm ….

Let’s see, he knows that his success in getting to the CFP has been built on dominating a weak conference (sound familiar bball fans?). He knows that OU has no chance he of competing in the SEC consistently, yet the expectations of the OU fan base will be completely unrealistic.

At USC, he basically has the OU job that he had before, but with a much better recruiting position. Brilliant move by Riley.

And OU thinks they will get Klingsbury to come back from the pros? I didn’t know that hallucinogens were now legal in Oklahoma.

Longhorn and Sooner fans, dial up a friend in Nebraska to ask them what the future looks like. This move looks more laughable by the day.

I’ll say it now, OU is going to have a very hard time filling their HC position. Is Schnellenberger still alive?

Every potential Walkon will now look for their opportunities to shine like Jared Casey.......

Watching this season (or listening while traveling) really has been enjoyable..... HC Lance Leipold and staff have a VISION........