Daniels officially supplanted Bean on the depth chart — after filling in for him due to an injury — for KU’s road finale this past weekend at TCU. But Bean was still involved in the game plan, just not as a QB. The 6-foot-3, 189-pound junior lined up in the backfield as a running back on a couple of occasions.

Bean isn’t an every down type of running back, but Leipold said the staff wanted to be creative and find ways to get him the ball if they could.

“As you know, our depth has been challenged in some spots,” Leipold said, referring to a slew of injuries at running back and tight end. “We’re trying to make the best of that situation.”

KU offensive coordinator Andy Kotelnicki said Bean, who had one rushing attempt and one reception in his first week in a new role, has handled the transition “really well” and taken a “professional” approach to the situation.

“I’m sure there's some disappointment and discouragement,” Kotelnicki said of Bean, who started the first nine games of the season at QB before getting hurt against Kansas State on Nov. 6. “But he hasn't let it show in his performance. He goes out there, he's still taking a lot of reps at practice and performing well at the level that we'd want him to.” 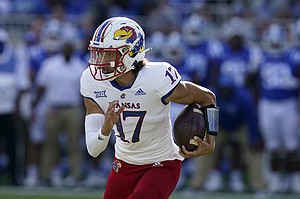 Kotelnicki emphasized that Bean has not switched positions, and he remains KU’s backup QB. Most of Bean’s game week preparation still involves his traditional spot. But now there are other elements to take on, too.

“It’s easy to kind of curl up in the fetal position and maybe whine about things but he's not doing that at all,” Kotelnicki said while referring to Bean’s demotion. “He’s handled it really well, professionally.”

While almost all of Bean’s production as a rusher came at QB, he enters the season finale on Saturday versus West Virginia (6 p.m, FOX Sports 1) averaging 4.3 yards per carry, with 400 rushing yards and six touchdowns.

With starting running back Devin Neal’s availability in question due to an injury he suffered this past week at TCU, the KU offense could use all the help it can get.

The hope for Bean’s new role, Leipold said, is that the Jayhawks (2-9 overall, 1-7 Big 12) will put him in situations where he can make something happen with his legs. After all, Bean did go for 100 yards on the ground as a QB during KU’s Week 2 trip to Coastal Carolina.

After one game of the experiment, Leipold called the returns “very average.” Bean rushed for 1 yard and caught a pass for a 1-yard loss against the Horned Frogs.

“But we’ll continue to see what happens there,” the coach added.

Even though Bean isn’t as heavily involved any more, Kotelnicki said he thinks the former starting QB is happy for his teammates’ success.

“And he's ready, because he knows you snap your fingers and your role changes,” in the game of football, Kotelnicki said. “He's following the mantra, stay ready so you don't have to get ready.”

That’s something teammates have noticed, as well.

Said KU super-senior receiver Kwamie Lassiter II of Bean: “He’s doing it all. Wherever he can fit in and make plays, that’s what matters to him.”

Rusher? No. Receiver? Yes! Dude's too fragile for rushing isn't he?

Doug - Agreed. I’ve been thinking Todd&Kerry 2.0. Kerry was even the backup QB for an entire year before switching to full time WR.

The article/coaches make a good point that at the moment it is a matter of #’s (low RB/TE) and he’s definitely not big enough to play TE.

The reality is they can call him whatever they want. (Is Casey a FB or TE?) As a RB, they have more flexibility in how they use him. I think he’s also bigger than Pooka by quite a bit.

Yeah, but he's obviously injury prone. Only one game left. Put Casey in at running back! Let the legend grow...

Bean’s current running to style is too upright and too cautious when it comes to contact. With that speed you definitely need him on the field but where?

WR where he can get into open space and possibilities to use his speed is highly encouraged.......

Kerry Meier should pay J. Bean a LOT of visits and give him insight on how a QB turned WR can utilize the QB mentality in a WR position......

Casey is a TE and we’re running out of bodies there as well.

Not sure where the idea that Bean is injury prone anymore than any other football player. It’s a violent sport. Injuries happen to anyone not on the bench. Sometimes they even prevent playing.

Andy will add the halfback option pass to the playbook, both 88 throwback and 89 throwback. Rock Chalk!