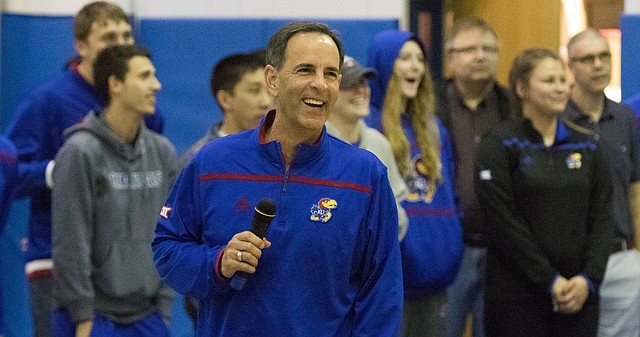 Kansas University volleyball coach Ray Bechard flashes a big grin toward the crowd gathered in the Horejsi Center to welcome histeam back to Lawrence on Sunday.

The Kansas volleyball program recently announced the signing of four top prospects, each of whom head coach Ray Bechard said could make an immediate impact with the Jayhawks.

McCarthy and Swanson will join the Jayhawks in January after graduating high school a semester early and Dalton and Kirsch are slated to arrive next fall.

“This class combines outstanding volleyball talent and high-end character which will allow these young women to positively impact our volleyball program on and off the floor for years to come,” Bechard said in a news release announcing the signings.

Dalton comes to KU from Chaparral High in Parker, Colo. A 6-foot-1 setter was named an American Volleyball Coaches Association High School All-American in 2021. She looks the part of the more modern-day college setter and is dubbed by Bechard as “extremely competitive.”

“Her length, foot speed and decision making will create an opportunity for her to impact our volleyball program immediately,” Bechard said of his new setter.

Kirsch comes to KU from Lincoln High in Sioux Falls, S.D. She stands 5-8 and was an honorable mention AVCA High School All-American in 2021. Bechard calls her “an elite back-court defender.”

“Brynn has outstanding platform skills and she plays with great enthusiasm and intensity,” he said. “She will have a significant impact on our pass and serve game.”

McCarthy, another defensive specialist, was a two-sport star at Palm Desert High in Rancho Mirage, Calif. Bechard said her length, at 5-11, allows her to have great range on defense.

“She is an outstanding competitor and has the unique ability to make those around her better,” he said.

A second-team AVCA High School All-American in 2021, Swanson comes to KU from McPherson High and Bechard said she has the potential to become one of the team’s biggest hitters.

“Rhian has an opportunity to be an elite Big 12 attacker,” Bechard said. “She will also be a point scorer with her ability to block at a high level, and will also impact the game with her back-row attacking.”

KU will close the regular season the following week, with two matches at Kansas State Nov. 26 and 27. From there, the Jayhawks will await there fate on the NCAA Tournament selection show, which is scheduled for Nov. 28 on ESPNU.

KU current has an RPI ranking of No. 39. Teams in the RPI top 40 are generally believed to be in good shape for a postseason bid. The Jayhawks last made the NCAA Tournament in 2017.

TCU comes to Lawrence with an RPI ranking of 96 and Kansas State is currently ranked 36th.