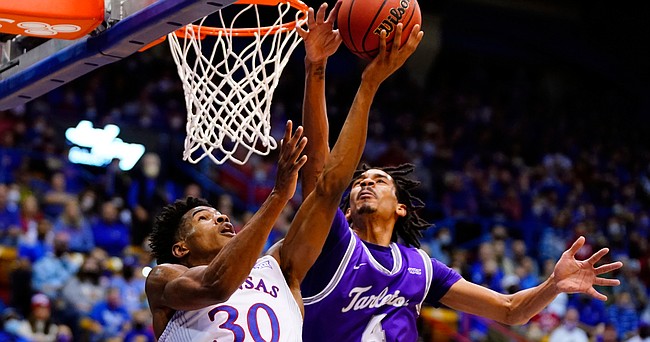 Kansas guard Ochai Agbaji (30) gets a reverse layup past the outstretched arm of Tarleton State guard Tahj Small (4) during the first half on Friday, Nov. 12, 2021 at Allen Fieldhouse.

But most on the Kansas bench will tell you that Friday’s 88-62 win over Tarleton State at Allen Fieldhouse was anything but easy.

“Coach told us it was going to be a dogfight,” junior guard Christian Braun said after the victory. “They were going to pressure us a lot, and that was a good challenge for us because it was something we hadn’t seen before.”

The smaller starting lineup employed by Self’s longtime friend and current TSU coach Billy Gillispie caused matchup problems and defensive issues for the third-ranked Jayhawks throughout the night. But after settling in and feeling out the speed and style of the game, the Jayhawks (2-0) found a way to contain most of what the Texans (0-2) did. That was particularly true in the second half, where KU outscored Gillispie’s club 49-31.

“I told Billy before the game, ‘You’re going to play five guards just to mess us up right off the bat,’” Self said after the win. “They played tiny the whole time. I actually thought we played pretty well. They play so hard; they play underneath you and play a different style.” 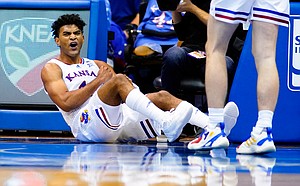 Early on, the Jayhawks tried to capitalize on their size advantage. But the TSU defense simply refused to let KU big man David McCormack get comfortable. That was on the offensive end. On defense, McCormack and KU’s other bigs found themselves chasing smaller, quicker players all night. That limited McCormack, Mitch Lightfoot and KJ Adams to just 10 points in a combined 38 minutes.

Despite their struggles to score, that same trio delivered 13 rebounds and five blocks. McCormack’s five blocks tied for the team-high with Braun, who hypothesized that most of his rejections probably came as the result of his own bad defense.

“I told the guys I was a rim protector in high school at Blue Valley Northwest,” said Braun, who added 15 points, eight rebounds and five assists to his final line. “I don’t think we played that great defensively, but still got a good win over a solid team. But we can be better.”

A big reason the Jayhawks were able to play from in front was the second stellar game in a row from senior guard Ochai Agbaji.

He followed up his 29-point outburst in Tuesday’s win over Michigan State in New York with 25 points on 11-of-16 shooting against TSU, drawing more praise from his teammates and head coach. Agbaji’s 54 points are the most by any player in the first two games of the season in the Self era, passing Frank Mason III’s 51 points against Indiana and Duke to open the 2016-17 season. 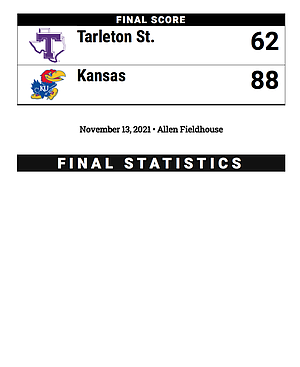 “Ochai was great,” Self said. “He was the best player in the game again. He was great. Efficient.”

While roughly half of Agbaji’s points came from 3-pointers and lob dunks, he also added a post-up game to his repertoire on Friday. Self said after the win that he wants to use Agbaji, Braun and Jalen Wilson in the post more this season because of their strength and athleticism.

Agbaji did that on at least three occasions Friday night, which, his teammates said, further demonstrated where his mindset is entering the season.

“I would say he’s just trusting his work,” Braun said of Agbaji. “He worked really hard this offseason and he's in the gym a lot. He’s as confident as he's ever been, and it's good to see. If he's doing that all year, our ceiling gets even higher.”

If there was one play that was indicative of the kind of night it was for both teams, that came midway through the second half when KU senior Jalen Coleman-Lands ran down a long pass in transition and saved it by diving out of bounds.

After crashing into the table behind the baseline, Coleman-Lands was helped to his feet and quickly got back into the play. From there, he caught a pass in the corner, pump faked and then drained a jumper to put Kansas up 56-41 with a little more than 12 minutes to play.

That was one of four makes for Coleman-Lands.

Self said the senior transfer had to hustle after the ball because he stopped running in transition in the first place. Braun said he was thankful, for his teammate’s sake, that Coleman-Lands hit the shot.

“I thought coach was going to lose his mind if he missed, so it’s a good thing he made it,” Braun said. “But that's kind of what he does. He’s a great shooter. And that's what he's going to bring to our team all year.”

Added Self: “If he can make three out of five that’s going to bode well for our team. Tonight, he obviously made them all.”

After playing his first game as a Jayhawk inside an “electric” Allen Fieldhouse, Coleman-Lands said he was willing to do whatever would help the team.

“I mean, that's kind of my role — make shots, play defense and be the best teammate for my team,” he said.

After playing two games in four days, the Jayhawks will get a chance to catch their breath before their next game. KU will play host to Stony Brook at 7 p.m. Thursday.

*Seems like Gillispie has a good thing going. I wish him success!

*Braun showed us how versatile he is. He plays a really complete game. It was good to see him dominate in blocked shots. He took advantage of his size and strength.

*I was sad that Clemence didn't make it into the game until Teahan time. But I understand. It was a small man's game today. However, I really like watching him play! He had no problem elevating over a small player with that high arch 3 point swish! I can't wait to see more of what he can do.

*Tarleton St. players are good shooters. They made 45% in the fist half and 36% in the second. I'd like to think that HCBS lit a fire in the team about playing D during halftime. I do think that we need some work in that area. But hey, it's the second game. I said it after the MSU game and I'll say it again; put in the players who lock down on D. We have a bench full of guys who can score. Defense is what will win championships.

*I like Wayne Simien. I graduated in his class as well. However, it was a bit odd for him to be the color commentor for the game. I mean....he works for KU athletics. He kept referring to "us". Again, he did a fine job of providing expert commentary, it just seemed weird to have a non-neutral person on the mic for the game.

In Wayne's defense, the broadcast was a Big 12-produced broadcast, so they're gonna have Big 12 guys like him on the broadcast.

As for Gillispie, I'm still shocked at how hard he has fallen to be at Tarleton State. When he pulled off those incredible turnarounds at UTEP and Texas A&M back in the day, he was the hottest coach in the sport, only to crash and burn at Kentucky, and then continue his demise at Texas Tech. Now he's at Tarleton State, which is just coming out of Division II. Gillispie is the Johnny Manziel of college basketball coaches - a hot commodity who couldn't handle the big-time, whose comeback efforts amounted to nothing, and who is now languishing in irrelevance. But man, he can still coach, as we saw last night!

I thought Wayne did an excellent job. I always enjoy Piper and now Wayne as they have a great insight to what goes on in a game. I have no problem with them being Jayhawks. Lots better than the split screen during the last game to hear about Ohio State football.!!!!!

Yeah, and anything is better than Dicky V. I also thought Wayne did a great job. Mostly my comment was just about his use of "we" and "us", ect. I just found it odd to have an announcer who was obviously cheering for one of the teams.

And I disagree on Dick Vitale. He has been a great ambassador for college basketball through all his years in broadcasting. Let's never forget that Vitale gave the ultimate gesture of respect to Nick Collison back in the day by giving him a standing ovation when he fouled out after a 24-point 23-rebound effort to help Kansas beat Texas 90-87 in Allen Fieldhouse.