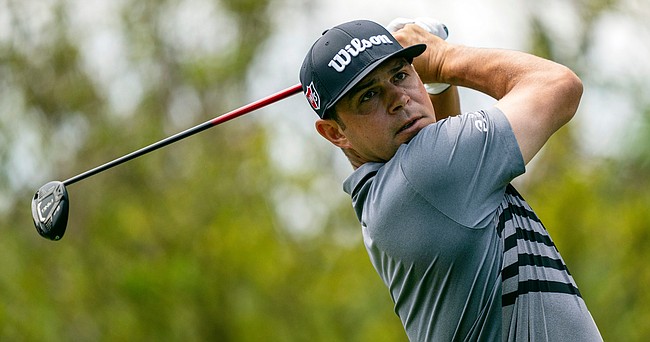 Gary Woodland watches his tee shot on the second hole during the third round of the Wells Fargo Championship golf tournament at Quail Hollow on Saturday, May 8, 2021, in Charlotte, N.C.

Former University of Kansas All-American Gary Woodland was one of 30 golfers — out of 156 in the tournament — to shoot under par during Thursday’s opening round of the PGA Championship, golf's second major of the season.

Woodland, who contended for his latest PGA Tour win two weeks ago, shot a 2-under par 70 at the Ocean Course in Kiawah Island, S.C.

His round left him in a 12-way tie for 8th place heading into Round 2 on Friday.

Woodland birdied the first hole on both the front and back nine on Thursday and added two birdies in his final five holes to finish three shots behind leader Corey Conners.

With a stiff wind into his face for his last five holes, the 29-year-old Canadian played the tough closing stretch in 2 under, one of those birdies a 55-foot putt from just short of the green.

He led by two shots over a half-dozen players. That group included Brooks Koepka, who started his day with a double bogey and stayed largely out of trouble the rest of the way, and Cameron Davis, who overcame a triple bogey on the sixth hole.

Keegan Bradley, Viktor Hovland, Aaron Wise and Sam Horsfield also were at 69. The seven players to break 70 were the fewest for the opening round of the PGA Championship since there were five at Hazeltine in 2002.

More telling were those on the other side of par, some of whom will be scrambling to make it to the weekend.

Dustin Johnson, the No. 1 player in the world in the midst of his worst stretch in nearly two years, took a double bogey from a wild tee shot on the front nine and a double bogey on the 18th for a 76. He's in jeopardy of missing the cut in consecutive majors in the same year for the first time in his career.

Justin Thomas took double bogey on the 18th hole in the morning and two holes later sent a sand shot over the green and just into a hazard for another 6 on the par-5 second. He had a 75.

Rory McIlroy, coming off a victory at Quail Hollow two weeks ago, sent his opening tee shot into a water hazard. He salvaged a bogey, but certainly not his round. McIlroy made bogey on three of the par 5s for a 75, his worst start ever in a PGA Championship.

Jordan Spieth, who needs a victory to complete the career Grand Slam, shot 73.

The PGA of America moved up tee boxes, as expected, to account for the wind. The course played to 7,660 yards — 178 yards shorter than the scorecard — though that didn't make it easy.

It's great to see Gary back on his game. Would love for him to pick up another major.