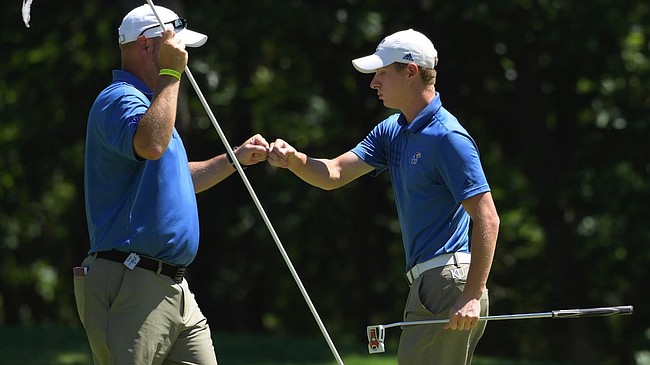 Despite KU qualifying for the postseason for the fifth consecutive year, just two of the six golfers the Jayhawks took to Florida with them have experience on the NCAA Regional stage.

“Sometimes youth is a beautiful thing,” Bermel said before the team hit the road. “They don't know what you're getting into so I'm curious more than anything with these guys. It'll be interesting to see how the freshmen react.”

The Jayhawks are seeded ninth at the 14-team regional hosted by Florida State, and the top five teams will advance to nationals later this month.

Although their focus is on playing well each day, each hole and each shot, Bermel believes his team is capable of cracking the top five.

Bermel said the Jayhawks’ top two players — junior Harry Hillier and freshman Luke Kluver — are among the top 15 or so individual players in the entire event.

“If they play well, we’re awfully good,” Bermel said. “And then it’s matching up the last three and getting two good scores out of the last three.”

Freshman Zach Sokolosky also traveled with the team as the substitute.

In all five spots, the goal is the same — play efficient, steady golf with no blowup holes and intense focus.

Asked if he has the kind of team that can finish in the top five if they do that, Bermel flashed extreme confidence.

In his 29 years of coaching college golf, Bermel now has taken a team to regionals 20 times. While they all are different in their own way, Bermel said this year’s trip was unique because of everything that came before it.

“After getting the season cut short last year and the way we’ve had to travel and manage school and golf, with all the safety precautions, it’s been a grind,” he said. “And there’s some real satisfaction in seeing all the hard work and sacrifices be worth it for these guys.”

Nostalgia and sentimentality aside, Bermel said the goal will be the same as ever when the Jayhawks tee off at 8:25 a.m. on Monday at Seminole Legacy Golf Club.

“The expectation every year is that we get to postseason,” Bermel said. “If you’re not in postseason, you can’t advance. So the goal is to get there and put yourself in position to play well and move on.”

The 54-hole tournament will begin Monday, continue Tuesday and wrap up Wednesday.

KANSAS TEE TIMES FOR ROUND 1: