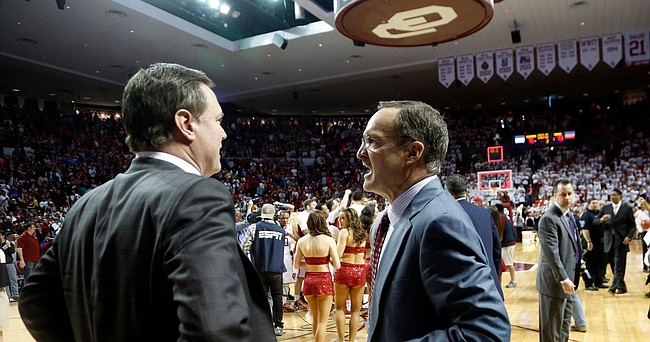 Kansas coach Bill Self and Oklahoma coach Lon Kruger meet on the court after the Sooners began celebrating after a last-second basket by Sooner guard Buddy Hield. The teams returned to the court because .2 seconds were still on the clock. The Jayhawks lost to the Sooners 75-73 Saturday in Norman.

After 45 years in coaching, the last 10 coming as the head basketball coach at Oklahoma, Sooners coach Lon Kruger is retiring at the age of 68.

Oklahoma announced the news on Thursday afternoon and the school’s athletic department has planned a press conference for 9:45 a.m. Friday.

Kruger, who also spent three seasons as the head coach of the Atlanta Hawks, is one of just three coaches to lead five different programs to the NCAA Tournament.

He reached five Sweet 16s and two Final Fours (with Florida in 1994 and OU in 2016) and walks away with the respect and admiration of everyone he worked with and coached against.

“I’m very happy for Lon to leave on his own terms,” Kansas coach Bill Self said Thursday in a statement released by KU. “I wish him nothing but the best in retirement. Being around (his son) Kevin, his family and the grandkids in (Las) Vegas, sounds like, to me, a pretty good way to spend retirement.”

Kevin Kruger was recently named the new head coach at UNLV, where he played for his dad during the 2006-07 season.

Self, whose Jayhawk teams were 16-5 against Kruger’s Sooners from 2011-21, always praised Kruger’s program before and after the Jayhawks and Sooners squared off.

“I had the opportunity to follow Lon at Illinois,” Self said Thursday. “And (I) saw firsthand what a class program he ran. I have enjoyed competing against him at his different stops, but primarily at the University of Oklahoma, where his teams were always classy and difficult to prepare for. I know personally the respect he commands in our industry and I’m sure his former players, assistant coaches and everyone affiliated (with) his programs over time would attest to the way he went about his business.”

I despise Lon Kruger, given that he was head coach at Kansas State, Illinois, and Oklahoma (all programs I hate). But at the same time, I can't help but admire the work the man has done through all his coaching stops. If ever there was a coach who had earned the right to retire on his own terms, it's definitely Lon Kruger.

That said, beating his KSU team in the 1988 Elite Eight was the most satisfying win by KU over KSU in any sport in the history of college sports!

It's one thing to hate a school and it's program. Missouri comes to mind. It's another to hate its coach because he happens to coach that school's team. An example for me is Norm Stewart. I will root against Missouri until my dying day, but consider Norm to have been a great coach and a worthy adversary.

Lon Kruger has always been a very classy coach and should be respected (not despised) for his body of work, no matter the school he coached for. It's a shame you can't see the difference, Bryce.

I also was an admirer of Lon Kruger, more for doing how well he did at K-State than at his other stops. It was great that the other program in the Big 12 within the state was always a difficult challenge to beat, though I'm glad our teams did so well against him. I hope OU gets someone more like him and not like Billy Tubbs.

Grew up loving Lon Kruger. Actually played baseball with one of his nephews when I was very young. Everyone in that family was a skilled athlete.

Incredible player. Incredible coach. Rarely do you see those two things together.

Vegas is about to get hot.

Nothing but respect for Kruger. He is a great coach and ambassador for college basketball.

Class act. Also a classy move to retire on his own terms. So many men don't seem to ever realize when it's time until it's too late.

I was 6 years old (1969/1970) and attended my first Silver Lake High School boys basketball game. The starting point guard was non-other than senior Lon Kruger. I did my best to watch the game, but as a 6 year old my attention span wasn't too good. Kids my age were running all over beneath the bleachers. At half-time, a handful of boys my age ran onto the court and were shooting the basketball. I went out there and shot some granny shots from the free-throw line.

Lonny went on to play at KSU, earning All Big-8 first team honors his junior and senior years.

Those boys and I that shot around at half-time, ended up winning the state championship my junior year and taking 3rd my senior year. We lost by one-point in the semi-final game, due to an errant call by the ref. He ended up getting suspended for future state tournaments. We had some good times in high school, winning championships in football, basketball, track, baseball, and cross-country (is that a sport?). Silver Lake HS has a rich tradition. Today 3 athletes are honored in the school's history. The first and one of three is Lon Kruger.

Congratulations Lonny on a high achieving and remarkable career. You have set a high standard to follow for the athletes that followed your time there at Silver Lake HS. Enjoy your retirement and God bless.

One of the classiest coaches and players to ever be involved with the game of basketball!

A Kansas legend. When Lon graduated from high school, he was the best basketball player in the state, the best football player, the best baseball player, and probably the best golfer. He and his teams have always exemplified class. Congratulations on a great career.