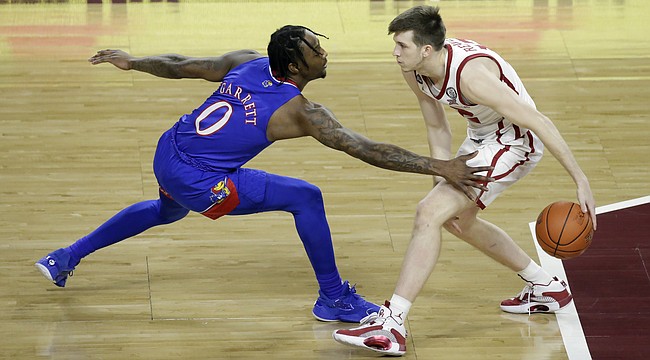 No. 25 Oklahoma knocked off Iowa State, 79-73, in the nightcap of the opening round of the Big 12 tournament Wednesday night at T-Mobile Center.

Kansas and Oklahoma split the regular season series, with each winning on its own home court.

Oklahoma, one of seven Big 12 teams ranked in the AP Top 25, led Iowa State, 36-28 at halftime, and then held off a late ISU rally to advance to Thursday.

Oklahoma led by double digits throughout most of the second half, but saw the Cyclones (2-22) trim the Sooners’ lead to six points with roughly four minutes remaining and as few as four in the final minute.

The Cyclones, who were winless during the Big 12 regular season, finished the season 2-22 overall.

Reaves scored 11 of his 21 points in the closing minutes, helping No. 25 Oklahoma answer Iowa State's late run and hold on for victory.

The Sooners had lost four straight.

Rasir Bolton scored 18 points and Jalen Coleman-Lands had 14 for the No. 10 seed Cyclones, who entered as the defending champion by virtue of their 2019 title but headed back to Ames with an 18th straight loss to end the season.

The Cyclones, who hadn't won since beating Jacksonville State on Dec. 20, hung tough until Oklahoma began building a lead out of halftime. The Sooners took advantage of three straight turnovers to begin their charge with Harkless providing a spinning layup in transition and Kur Kuath a reverse ally-oop dunk.

By the time Bolton ended the run, the Sooners' lead had swelled to 51-34 with 12 minutes to go.

It eventually reached 19 before the Cyclones made a final run in the closing minutes. Bolton and Coleman-Lands did most of the damage, taking advantage of some suddenly sloppy offense by Oklahoma to rip off 11 straight points.

But with their lead trimmed to 58-51, the Sooners turned to Reaves, who first knocked down a step-back jumper before answering Coleman-Lands' 3-pointer with one of his own. And when Iowa State kept getting baskets in the final seconds, Reaves and Harkless answered with steady leadership and poise at the foul line.

That allowed the Sooners to hang on for their first Big 12 Tournament win since 2016.

The Cyclones' loss total trailed only the 1975-76 team, which went 3-24 — though that team, coached by Ken Trickey, had a better winning percentage. Along the way, the Cyclones joined the 1936-37 team as the only ones to go winless in conference play.

Oklahoma at one point was ranked in the top 10, but its late-season slide left the Sooners needing at least a win Wednesday night to feel better about their NCAA Tournament hopes.

Now, they can essentially lock up a berth with a win over the short-handed Jayhawks, who will be missing David McCormack and Tristan Enaruna due to COVID-19 protocols.

Hey, what network has the broadcast tonight?

ESPN2 as are all Big Xll tourney games I believe except for the finals on Saturday which are on ESPN.