Jayhawks officially the No. 2 seed in 2021 Big 12 tournament 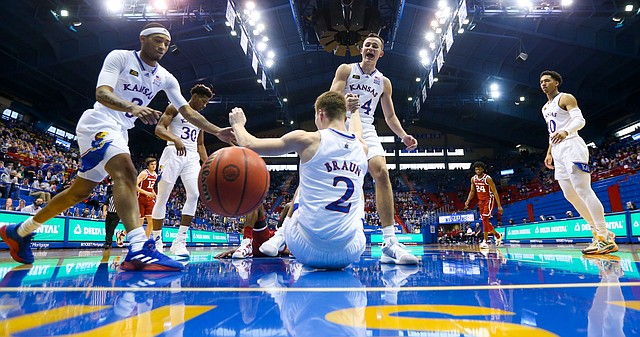 Oklahoma State’s 80-75 win over West Virginia on Saturday secured a second-place finish in the Big 12 Conference for the Kansas men’s basketball team.

As a result, Kansas will be the No. 2 seed in next week’s Big 12 tournament at T-Mobile Center in Kansas City, Mo. Bill Self’s squad will play the winner of Wednesday’s 7-10 matchup between Oklahoma and Iowa State at 5:30 p.m. Thursday.

The Jayhawks, who capped off Big 12 play with a 13-point win over then-unbeaten Baylor in the 18th and final game of their conference season last Saturday, played one nonconference game this week, but mostly watched their Big 12 brothers finish their seasons with make-up games and rescheduled contests from various COVID-19 pauses throughout the season.

Because not all teams were able to play a full 18-game Big 12 slate this season, there were contingency plans in place for determining the Big 12’s regular season champion.

The plans, put in place by the league office, were based on adjusted winning percentage and phantom losses, which only would have been necessary if any Big 12 team did not come within at least three games of the average number of Big 12 games played by each Big 12 team this season.

The average wound up being 17 (170 games divided by 10 teams) and Baylor, with its win over Texas Tech on Sunday afternoon, reached the 14-game mark, meaning none of the plans were needed.

What's more, Baylor's 88-73 win over the Red Raiders made the Bears 13-1 in Big 12 play, meaning that even if BU had played and lost all four conference games it missed because of COVID-19, Scott Drew's squad still would have finished with fewer losses than any other Big 12 team.

Texas, which closed out the Big 12 regular season with a 12-point win at TCU on Sunday evening, also finished 11-6, but, again, that leaves the Longhorns a few percentage points behind KU for the No. 2 spot.

Here are the final seeds for next week's tournament, which opens with the bottom four teams playing each other on Wednesday.