NCAA on verge of putting interim NIL policy in place 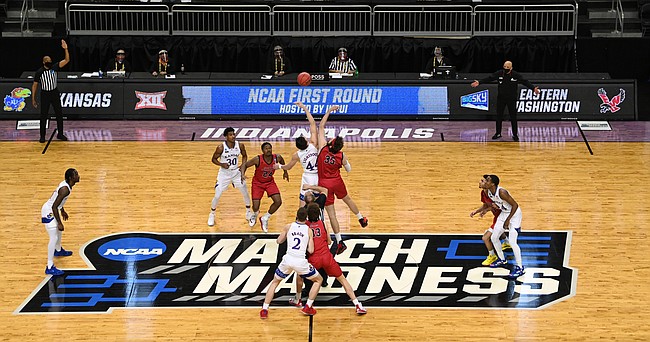 The teams lineup for the opening tipoff of Saturday's 93-84 first-round NCAA Tournament victory by third-seeded Kansas over No. 14 seed Eastern Washington at Indiana Farmers Coliseum in Indianapolis.

The NCAA is set move forward with an interim name, image and likeness policy, as some states already have passed laws that will allow college athletes to make money from NIL pursuits as soon as Thursday.

The NCAA’s Division I Council voted this week to recommend its board of directors adopt the interim policy when it meets on Wednesday.

An NCAA press release stated the temporary measure, once approved by the board, would remain in place until federal legislation or new NCAA rules are established.

Although a bill regarding NIL was introduced in Kansas, it failed to pass in May. As of Tuesday, according to Ross Dellenger of Sports Illustrated, 23 states nationwide have passed NIL laws, with 13 of them set to go into effect on Thursday, the first day of July.

Because there are no NIL laws on the books in Kansas, athletes at the University of Kansas will be allowed to follow the NCAA’s temporary NIL rules once those are in effect.

As stated in the NCAA’s release on the matter, athletes “who attend a school in a state without a NIL law can engage in this type of activity without violating NCAA rules related to name, image and likeness.”

The recommended guidelines, which according to various reports are expected to be approved when the NCAA’s board meets Wednesday, state athletes can use “a professional services provider” for NIL activities.

The release also stated the interim policy will allow schools and conferences to adopt their own NIL policies.

I have said this before but it bears repeating: The NCAA is stepping back and doesn't want responsbility. They are leaving it up to the states or they are wanting Federal legislation. Which is a bunch of HOOEY!

The Federal Government has no business creating laws for associations, colleges, universities, sports teams, etc. The NCAA should handle it themselves. Laws regarding professional sports are already in place. If college athletes are allowed to make deals, contracts, and sign agreements for there name, image, or likeness, because they are athletes....then they are no longer Amateur Athletes! The laws for Professional Athletes should apply.

If the school has professional athletes playing for them, the schools should file W-2's for each scholarship, room & board, paid to players. Because, you don't get a scholarships unless you have the rights to NIL and playing professional sports at the University. Players should no longer qualify as a dependent. How can you be 18, considered adult, play professional sports and make $50K per year, and be a dependent? So the Professional Athletes should have to pay taxes on all the tuition, books, room & board and shown as income.

Now for the can of worms. The school and conference have control over the school name, mascot, uniform, etc., If the player wants to use their image with a Jayhawk uniform they should be out of luck unless they pay and get license. If not, do all KU students get a free license? So they have to pay,, or if free, they have to pay taxes on what it is worth. The Univiersity will have standardize those charges and make them fairly available to all. So this is a great way for the school and conference to increase revenue, have control over players and raise revenue. What if you only have license for 100 shirts and want to sell 1000? Goodluck to these players selling a shirt or uniform with their name without school or conference logo and controlling what and how much they sell.

Finally, ...no names will want their share too! Just wait until Johnny QB drives up in his Ferrari loaded with harem, doobie in the tray, while no name OL and DL are fed tube steak. Soon there will be shouts in the locker room and through the halls... "Heeyyy coach", or "Heeyy Mr. Booster!", "if you want me to block today, how about an order for 100 T-shirts?" Or, "I have $50K for a bobble head I want to sell you?" But before they even get to school, Big Daddy Billionaire in Southwest Manhattan will be buying 10 of those bobble heads from each 5 star recruit for them to play at Bufalo U to win it all. How can anyone control who buys or sells what and for how much? This mess will be more skaroo'd up than 85 gold plated necklaces in a vibartory bowl. And for all you socialists...bright side is..some players will learn how to make T-shirts, use 3-D printers, and go into business.

Don't forget all the marketing classes held on campus in the business schools that will now have their students working with the athletes to come up with new and different ways of turning bucks. The NIL stuff isn't just for athletes, but it's for students campus-wide. Can you imagine the profits for players who advertise in the Kansan about their signing event at a sporting good store downtown? Get the whole offensive squad to sign a football, or a jersey, or photo of a touchdown run/pass.

If you kids don’t behave, I’m going to stop this car.

Thanks Dad. We really need a bathroom.

Brian - nice rant, I have no idea what you are talking about. Professional Athletes have pro contracts paying them money to help handle their affairs. The IRS is going to like some records, state and local taxes too. H&R Block needs to be on campus. Adidas will want a say. Lots of loose ends with no State or Federal protections, that always works out great for everyone involved. Graf, Corruption, Fraud, Bankruptcy and Lawyers are going to eat into their profits a little. Tim - I am not sure there is going to be a long line for the Football team autographs. You might be overshooting a bit on how much money that will bring to each player. Dirk - I am with you, and I like your post!

This is going to be a mess

The only difference will be the players won't have agents to sign contracts with the school, or the NFL, NBA, MLB etc. But on day one the players will start having NIL Business managers. Their business manager will make commissions, sell their Name, Image, and Likeness, arrange autograph sessions at the local dispensary, etc., Common sense is you have to have someone being paid a commission to help make deals and manage those activities and to make sure their NIL contracts are good contracts.

Brian I can smell the lawsuits already. Are these "Business Managers" Lawyers, any contract must be reviewed in detail? Has Adidas made any statement on this? How about players managing their taxes. Investments for their money? I want the players to be able to earn money. I just would like them to keep most of it. I agree with Mark Few (zags) - "... a national law was necessary to provide a consistent set of rules for the country as a whole. It needs to be in place to keep the playing/recruiting level even, fair. I wish we could just go on the honor system here, but I am not sure that word means that much to anyone when money is on the table, and an advantage can be gained. My friend said that the state of Alabama just added two new pro teams, basketball and football. Funny, but true :)