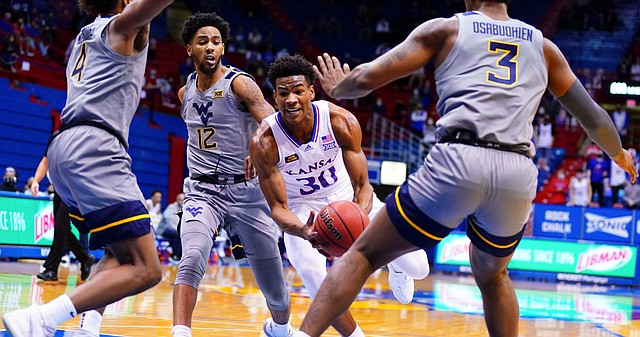 If the latest projections from ESPN’s Jonathan Givony are correct, there won’t be any Jayhawks selected in the 2021 NBA Draft.

Fresh off last week’s NBA Draft Combine in Chicago, Givony updated his mock draft and the newest version published at ESPN.com doesn’t include University of Kansas early entry prospect Ochai Agbaji who went through testing, drills and played in a scrimmage setting at the combine.

That was a slight change from Givony’s previous projections from before the combine, which predicted Agbaji would be the 59th player to go in the 60-player draft.

The only former KU player to appear on the most recent mock draft for ESPN was Quentin Grimes, who played just one season for the Jayhawks (2018-19) before transferring to Houston. Coming off a junior year for the Cougars in which the team reached the Final Four and Grimes averaged 17.8 points and 40.3% 3-point shooting, Grimes improved his stock at the combine. Givony considered Grimes one of the winners at the evaluation event, and slotted Grimes as the No. 28 pick, going to Philadelphia, in his latest mock draft.

Not only Agbaji, but also KU wing Jalen Wilson and Arizona State transfer Remy Martin, have until July 7 to decide whether to stay in the draft or return to college and play for the Jayhawks during the 2021-22 season.

Agbaji, a 6-foot-5 guard who would be a senior at KU next season if he were to return, averaged 14.1 points and shot 37.7% from 3-point range during his junior year, in which he started all 30 games for the Jayhawks.