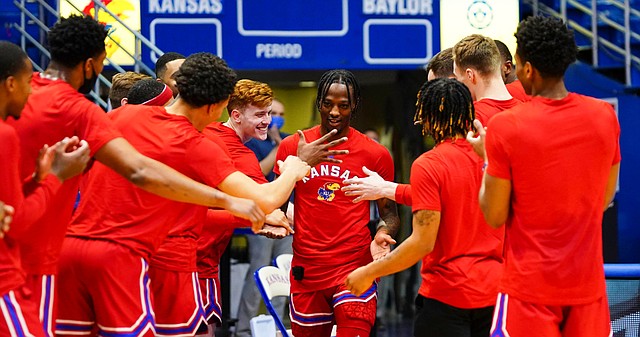 Teammates of Kansas guard Marcus Garrett congratulate him as he is brought out to the court prior to tipoff on Senior Night, Saturday, Feb. 27, 2021 at Allen Fieldhouse.

Garrett, who is currently working out for NBA teams in hopes of getting drafted next month, earned all-Big 12 second team honors during the 2020-21 season and followed up his Naismith Defensive Player of the Year award from 2020 by cracking the Top 10 for the same award in 2021.

Garrett, a native of Dallas, also was a Senior CLASS Award All-American and landed on the Academic all-Big 12 second team.

He was the lone player to go through Senior Night with the Jayhawks this season and his goodbye to the program featured a heartfelt essay that expressed how appreciative he was of his time with the program and playing for KU coach Bill Self. 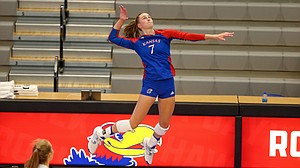 Mosser came to KU as a grad transfer after a successful stint at UCLA. She will return this fall for her super senior season thanks to the blanket waiver provided by the NCAA to all athletes in the wake of the COVID-19 pandemic.

Mosser made a major impact with the Jayhawks during her first season in Lawrence.

She started in all 18 matches she played in and provided a young KU roster with a veteran presence and leadership throughout the season.

She led Kansas’ offense with 229 kills and an average of 3.37 kills per set and also added 22 aces and 169 digs, which ranked second on the team in both categories.

This year’s winners will be announced on July 6, and fans will be able to vote for their favorite Big 12 athletes from 2 p.m. July 2 through 8 a.m. on July 5 at Big12Sports.com.

The fan vote will factor into the final tally for the awards.