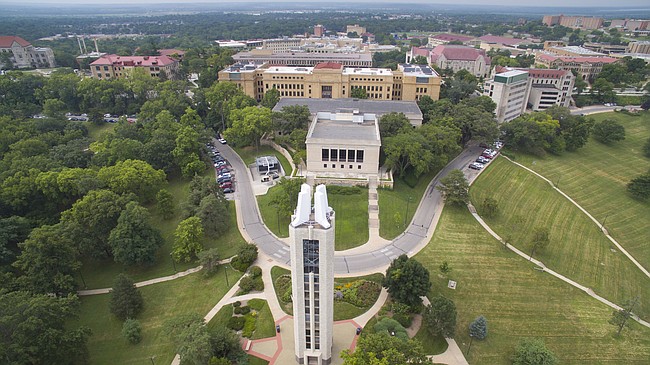 An aerial photo of the University of Kansas campus in August 2015.

Several student-athletes at the University of Kansas delivered a memorable performance in the classroom during the recently completed spring semester.

In recording an overall grade-point average of 3.40 across all sports this spring, all 14 of KU’s scholarship programs topped the 3.0 mark and five set new program records.

“Despite the incredible challenges of the past year, our student-athletes rose to the occasion to set a new benchmark of excellence in the classroom,” first-year KU Athletic Director Travis Goff said in a release announcing the achievements. “We are so proud of their accomplishments and inspired by their work ethic and commitment to their education. I look forward to future success in the classroom with the continued support of our coaches and academic staff.”

The men’s basketball program’s new high of 3.56 came on the heels of Bill Self’s squad establishing a new program record of 3.44 last fall. The football program, meanwhile, topped the 3.0 mark for the second consecutive spring.

In all, 89 KU athletes record a 4.0 GPA during the spring semester and 246 (of around 500) hit the 3.0 mark. The release notes that 75% of KU’s student-athletes on active rosters earned a spot on the Athletic Director’s Honor Roll this spring.

Those really are some impressive numbers. As the ads say, most of these young people will need to “go pro” in something other than Athletics. Those high GPAs will pave the way to grad school, strengthen resumes and lay a solid foundation for future endeavors. Congratulations to all. Well done.