KU men’s basketball to face North Texas in opening round of ESPN Events Invitational on Nov. 25 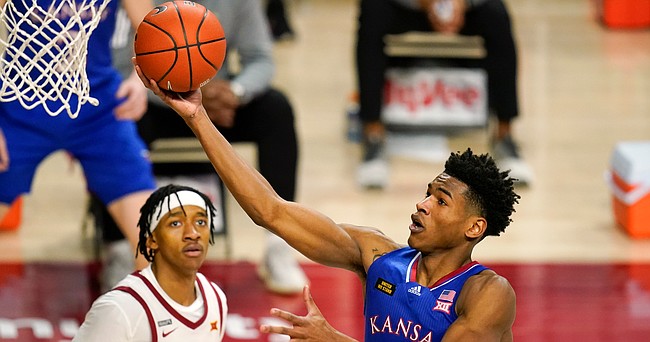 The Kansas men’s basketball team will face North Texas in the opening round of the ESPN Events Invitational on Nov. 25 in Kissimmee, Fla., the network announced Thursday.

KU is one of eight teams playing in the Thanksgiving-week event, which will feature three games in four days.

The game time is set for either 1 or 1:30 p.m. that day and the winner will advance to the 12 p.m. semifinal on Nov. 26 against the winner of the Dayton-Miami (Fla.) first-round contest.

The championship game is set for Nov. 28 at a time yet to be announced.

The Mean Green won the Conference USA tournament title last season to earn an automatic bid to the 2021 NCAA Tournament. While there, they upset Purdue in the first round to deliver the program’s first-ever NCAA Tournament victory.

UNT had not been in the NCAA Tournament since 2010.

The Mean Green then lost to Villanova in the second round in Indianapolis and finished the season at 18-10 overall.

North Texas, which is coached by fifth-year head coach Grant McCasland, will return roughly half of its roster from last season, including 2020-21 starters Thomas Bell and Mardrez McBride.

The matchup will mark the second-ever meeting between UNT and KU. The Jayhawks won the first meeting, 93-60, in Nov. of 2010 at Allen Fieldhouse.

On the other side of the bracket, an Alabama squad that is expected to enter the season in the top 10 of the national polls will face Iona and Belmont will take on Drake in the other opening-round contests.

It's Disney with sneakers and turkey. Lightfoot, with Mickey Mouse ears on, saying "I am going to Disney World" after we win a game, would be priceless! Talk about a NIL opportunity.

Yeah, because all the Disney execs are sitting around the table trying to figure out ways they can increase their market share in the critical untapped Kansas market.

I think that NIL has two tiers. Tier 1 is for the blue chips who are featured in magazines, video games, and national TV advertising. Tier 2 is places like Bubba's Ford and Mercury who will pay the athletes to come spin a sign in the parking lot for two hours on a Saturday once a month. Or for Sunflower Cable Co to feature a couple players on 30 second ad on local tv or radio.