The conference announced Thursday the representatives for all 10 schools, a list that included wide receiver Kwamie Lassiter II and safety Kenny Logan Jr. for KU. They will have the honors of joining head coach Lance Leipold at AT&T Stadium, where they will pose for photos and answer questions about the upcoming season.

Kansas is slated to participate on the second day of the two-day event. Baylor, Oklahoma State, Texas and Texas Tech will all join KU on July 15. The first day, which will take place on July 14, features Iowa State, Kansas State, Oklahoma, TCU and West Virginia.

All schools have only two representatives schedule to attend, something that is different from previous years when teams brought up to four players. 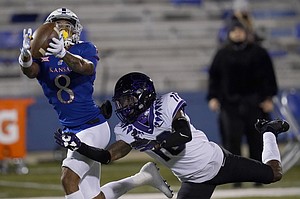 Not only will this be Leipold’s debut at Big 12 media days since coming to KU from Buffalo this past offseason, but both Logan and Lassiter are making the trip south for the first time as well.

Logan, who has emerged as a leader of KU’s defense, played in all nine games of his sophomore season in 2020. He led the Jayhawks in tackles with 58 total, which included 40 solo stops. Logan also broke up three passes and recorded two interceptions. He made the All-Big 12 honorable mention as a returner.

Lassiter, a senior, figures to be an important part of the offense as the leader of an inexperienced wide receiver unit. Last fall, Lassiter led KU with 43 receptions for 458 yards on his way to being named All-Big 12 honorable mention. He snagged two touchdown receptions and averaged 10.7 yards per catch.

This year’s event marks the official return of Big 12 media days, as it did not hold an in-person event last summer due to COVID-19.

Question to the LJW Sports staff. Did Kyle Thompson decide to move on from playing a final season of NCAA Football?

To date, I don't see where he possibly transfered to.