‘Something has to change’: No. 9 Kansas drops third consecutive game after 75-68 road loss to Oklahoma 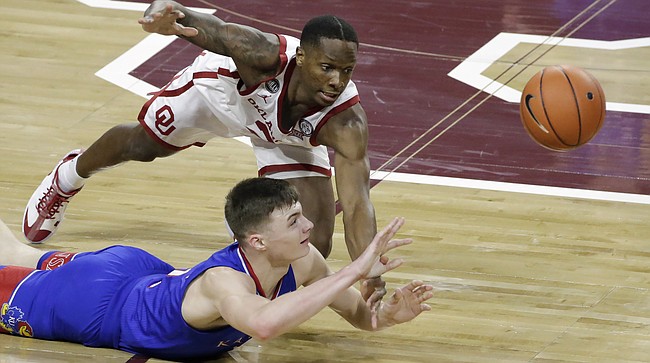 The ninth-ranked Kansas’ basketball team dropped its third consecutive game on Saturday, falling 75-68 at Oklahoma to move to 10-5 overall and 4-4 in Big 12 play.

While there was some talk in the postgame press conference about how the Jayhawks let their latest game get away, the majority of the conversation was about the team’s mental state, its psyche, and where the Jayhawks go from here.

Self shared a little of what he told his team about that during his postgame meeting with the media.

“The storybook season, as far as winning all the games and being a 1 or 2 seed, that's probably done,” Self said. “What we have to create is a storybook ending. And that’s still in play.”

It won’t come, of course, without some significant improvement.

And the strange thing about Saturday’s loss at Oklahoma was that the Jayhawks actually showed improvement in two of the areas they were looking for it most.

After starting slow offensively in several games against Big 12 foes, KU drained six of its first 10 shots on Saturday to run out to a 16-10 lead.

Redshirt freshman Jalen Wilson scored eight of those 10 and looked to be headed toward an offensive breakthrough.

And senior Marcus Garrett, who Self said needed to shoot the ball more, did just that, knocking eight of 12 shots, including three of five from 3-point range, to lead Kansas with 21 points.

“Fortunately we had him today,” Self said of Garrett. “Because if we hadn’t, this would have been ugly.” 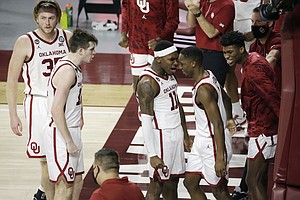 But while those two improvements helped Kansas on the offensive end, the Jayhawks still had far too many lapses on the defensive end for them to matter.

“That was the difference in the second half,” Self said. “We just didn’t guard our man.”

One such lapse came midway through the first half, when the Jayhawks went ice cold on offense — making just three of their final 16 shots of the first half — and watched Oklahoma rip off a 14-0 run that allowed the Sooners to claim control of the game.

“We went through a stretch where we didn't guard at all,” Self said after the loss.

A similar stretch, late in the game, wound up spelling doom for the Jayhawks, who watched Oklahoma repeatedly force the switches they wanted — Self said OU is the best in the Big 12 at that — and then drove right to the rim for layups out of them.

Most often, that came with Wilson guarding the ball, so much so that Wilson was actually on the bench for much of the final two minutes, as Kansas tried to stage one last comeback.

“They were just spreading the floor and just trying to drive it downhill,” Garrett said of OU’s game plan. “I feel like there late (was when) it got away from us.”

Garrett also noted that KU’s early foul trouble in the second half, which put Oklahoma in the bonus with 14:20 still to play, contributed to KU’s struggles.

Despite the sluggish stretch midway through the first half, the Jayahwks trailed by just one at halftime (29-28) and actually came out with some fire in the second half.

David McCormack, who was limited to 17 minutes after shooting 4-of-10 from the floor and missing several close ones inside, scored twice in the post to give Kansas a 32-29 lead. But Oklahoma responded with an 11-3 run to reclaim control.

Senior forward Mitch Lightfoot, KU’s five-guard lineups and continued strong play from Garrett all gave Kansas a lift in the second half.

But none of that could overcome KU’s defensive struggles with the game on the line. After falling behind 67-60 with 1:59 to play on a drive to the rim by OU’s Umoja Gibson, KU never drew closer than four points the rest of the way. And that came when KU junior Ochai Agbaji, who finished with 10 points on 3-of-8 shooting, hit a 3-pointer on KU’s next possession. 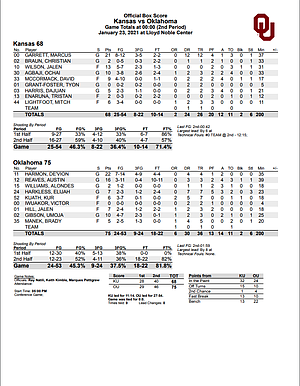 Six of Agbaji’s 10 points came in the final two minutes, with KU running out of time.

Asked after the game what comes next for Kansas, which will play host to TCU on Thursday, Self took a literal approach to answering the question.

“Where do we go from here,” he said, repeating the question. “Well, we go back to practice. We’re just like 97% of the other teams in America. We've had a hard stretch, but, hell, we’ve played three road games, too, against three tournament teams.”

Self made sure to point out, however, that even though he does not consider KU’s recent losses to be bad losses, he does not deem them acceptable either.

“Basically, we have to come together,” he said. “Something has to change. … I just know we have to get it together and I feel confident in us getting it together. We’ve got the best coach and he’s going to make sure we’re ready for our next game.”

Inconsistent play. It's either a faulty game-plan and strategy by HCBS, or poor execution by the team (or a combination). To me, it looks like the team is leaderless and lacks intensity for 40 minutes. Individually, several players need to improve in some specific areas (Braun: defense, Garrett: how to not get your shot blocked, DMack: how to slow down and finish at the basket).

Two things occur to me regarding this KU team.

Obviously, it's not nearly as strong as we've all become accustomed. That's the obvious part which leaves very little room for error every game.

And secondly, we only have ONE true PG on this team that is effective & ready to play now & that's Harris, He has good ball handling skills, plays good defense, and passes & distributes the ball well.

Move Garrett back to his more natural position as a wing/SG.

This strategic move alone won't make us a great team, but it will make us a better & more competitive team with a better chance to win more games.

For sure, our offense efficiency will dramatically increase.

The only flaw in that is that Harris has zero offensive game right now. Dude never shoots and isn't a threat to score at all. At least w/Garrett in, you have the hope that he can score some. I feel like the problem has just been inconsistency. Braun was a disaster Saturday, both on O & D. He was great the game before. Wilson has been up & down, as has McCormack, who was great for 3 games in a row. Agbaji? Where the heck was he? All really good players but it's tough for them to string really good games back to back to back. It's baffling.

I've found that the our guys do not take advantage and punish people for trying to take away their strengths and don't think they are even good enough to take advantage when a team takes away their strength. I will also say that Marcus is not an effective offensive player because his defender just clogs up the paint. For example.... Ochai has proven himself as a consistent knock down shooter this year, but doesn't pump fake and get into the lane and finish (ever). Or a least pass to get the defense moving or open shot. Same case for Braun. I would be interested in the stats for how many finishes in 1/2 court with defense set and FT's that Ochai and Braun have on the season. Also- Wilson and Garrett are the most consistent drivers, but not nearly as consistent shooters, so defenders are prepared to keep them in front and dare them to shoot. Bottom line our opponents are playing the odd's in the scouting report and we don't have even one complete player to make them pay. This lands us as an average team. Think about Baylor and Gonzaga. They have multiple players that are complete players at driving, shooting and even playing defense. We can still be competitive because of coaching and some talent, but our guys need to make big jumps in their overall game to take us to National Championship caliber. Right now we just aren't there.

Here is the scouting report for other teams. Do you think teams are afraid of this? Ochai- shooter only and above average defender, make him dribbler and passer as he is not a good passer. Garrett- driver only, excellent defender. Anticipate his spin and bring help. Let him shoot. Wilson- driver and shooter but inconsistent (closest to complete player) Braun- shooter only and average defender, may him drive, not strong ball handler. McCormack/Lightfood/Enaurna/BryceT.- Average at everything and not great at anything. Harris Jr.- distributer only, above average defender, make him shoot. TyonGFoster-average

Very true. And I think everything comes down to coach BS strategy. Focus is always feed the post, high low. 3pt shooting = fools' gold in the past. Now, he has no options, but to go after non-bigs to score. Unfortunately, like you said, no one really has consistent scoring touch. I'm betting on Harris - the only glue guy who can make everyone confident in scoring. Just wait, once he's comfortable in shooting, too, he'll be more dangerous..

What is different about this team is that it cannot play tight defense like Self’s usual teams. Garrett is a good defender but that is about it. Defense is a total team effort and I just don’t think it will improve enough to produce winning play against the better conference teams. Fortunately, the Jayhawks have some cream puffs coming up on the schedule. TCU, Iowa State, and K-State will be clubs that KU’s frail defense can handle.

Exactly. Defense is a team effort. We switch everything but the other team still gets off good looks at 3 point range. Garrett plays good one-on-one defense, but then a simple pick and roll by the opponent yields and easy bucket. We've played more zone this year than I have ever seen. No scheme in the world can make up for effort. To be successful in this league requires more effort on defense than perhaps ever before.

The threat of multiple infractions And probation by the NCAA has led to inadequate recruiting Over the past 2 years. KU better Step up and challenge the NCAA On the probation issues , or We are in for several unacceptable Seasons ahead due to lack of Great players

All good points, I would just add that putting best 5 players on the court is not working, now we have to find the best 5 who mesh as a team, and who give the greatest effort.

This is practically every game He is looking for a place to pass before he even get's the ball.

He is scared to shoot in fear of missing ! And you have seen the results. NO ONE IS SETTING SCREENS No one knows how....to get open. and why does Okla homa rank to the top in free throw percentage ? And we struggle at the line.

I did not see this game, but it sounds like a replay of opponents know to drive downhill on us. That is a consistent theme, we just can't stay in front of our man. Maybe we go zone, something totally different.